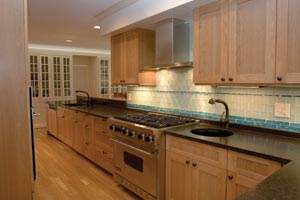 Chris Donaghy, principal of The Kitchen Brokers, LLC, says that incorporating green elements into his designs has become easier with the growing choices of products that fit the bill, such as the zero-VOC cherry cabinetry from Neil Kelly in this Washington, DC project Donaghy designed.

There’s no question that the green movement just keeps snowballing. While a speaker at last fall’s Decorative Plumbing and Hardware Association conference announced, “Green is last year. Green is over. People will not pay the premium for sustainable products in this economy,” so far, it appears that the opposite is proving in many cases to be true.

In fact, when Kitchen & Bath Design News recently polled readers on the KitchenBathDesign.com website about demand for sustainable materials, products and services, a half of all respondents said they saw these products trending steadily upward. Another 28% reported that they saw a “considerable” trend toward green products, while only 21% said they saw no movement toward sustainability at their showrooms at all.

Equally telling is the growth in the availability of green products, as well as the increased attention being paid to green manufacturing processes and initiatives.

Likewise, government programs designed to promote green initiatives to consumers are impacting the market and the perception of green as having tangible value.

So what does all this mean to the kitchen and bath design community? For most design professionals, the plethora of green products is key to driving this trend.

Chris Donaghy, principal of Lorton, VA-based The Kitchen Brokers, LLC, a firm which specializes in green design, says that product availability has turned even some nonbelievers on to green design.

“Many of our clients come specifically to us because we’re green specialists. When we encounter ‘non-green’ clients, however, it’s becoming much easier to persuade them to consider some green elements in their projects. It’s mostly due to the reduced cost of these products, which is directly attributable to their greater availability,” he says.

Some products are timeless, he notes, and can appeal to any client regardless of their stance on the project’s carbon footprint.

“This surge that bamboo has seen could turn out to be a trend, but most of the products we promote – Marmoleum, concrete countertops, etc. – have classic appeal and attractive price points that often beat out their non-green counterparts,” adds Donaghy.

The interest in sustainable products and practices could be seen at the U.S. Green Building Council’s Greenbuild International Conference and Expo in Phoenix last November, which reported sell-out show floor space and, overall, beat attendance estimates for the three-day event by some 12,000 attendees.

LEED certification – the high watermark for many construction projects and the builders, architects and designers associated with the green movement – is up as well. Designations such as LEED Green Associate and LEED AP have also been added to certify green professionals.

Many companies which have opted not to display booths at other industry events have chosen to participate in Greenbuild. And, at next month’s K/BIS, a wealth of green products are slated for introduction.

Beyond that, companies are finding green projects in which to participate, such as the McLean, VA CharityWorks GreenHouse (see Showhouse Spotlight), which is touted as the first carbon neutral home on the East Coast. The brains behind that project partnered with companies like Cosentino and Karastan, manufacturers which visibly promote their products’ eco-friendly aspects.

The New American Home, the annual centerpiece of the International Builders’ Show, has been a green home for many years.

While designers, dealers and manufacturers have been making strides in creating greater environmental awareness, the U.S. government has also gotten into the act.

Thanks to a tight economy and a slumping housing market, the government has stepped in to create a ‘Cash for Clunkers’-type program to encourage the purchase of energy-efficient appliances. Similar to the Car Allowance Rebate System which gave deep discounts for trading in automobiles of low fuel economy, the State Energy-Efficient Appliance Rebate Program (SEEARP, or ‘Cash for Appliances’) is designed provide a rebate to consumers who purchase Energy Star appliances. This is set up through funds provided to individual states.

While programs such as these may be viewed initially as a way to generate consumer savings and spark sales, they also increase environmental awareness.

Manufacturers are now partnering in these efforts by stepping in to help consumers figure out what’s eligible for the rebates where they are. Whirlpool Corp. recently unveiled a tool across three of its subsidiary brand Web sites (Whirlpool, Maytag and KitchenAid) wherein a site visitor types in a zip code and appliance type and the online tool displays the amount of applicable state rebates through the program, as well rebates from local utility companies.

Bosch recently began offering its own rebates to consumers in tiers differentiated according to the type of product purchased.

Even the Sears Blue Crew is getting in on the trend, with TV ads changing the spokes team’s title to the “Climate Crew.”

While only time will tell whether green design is a trend or a long-term lifestyle movement, with manufacturers and the government actively supporting eco-friendly initiatives, it seems likely that impact of green will continue to grow.