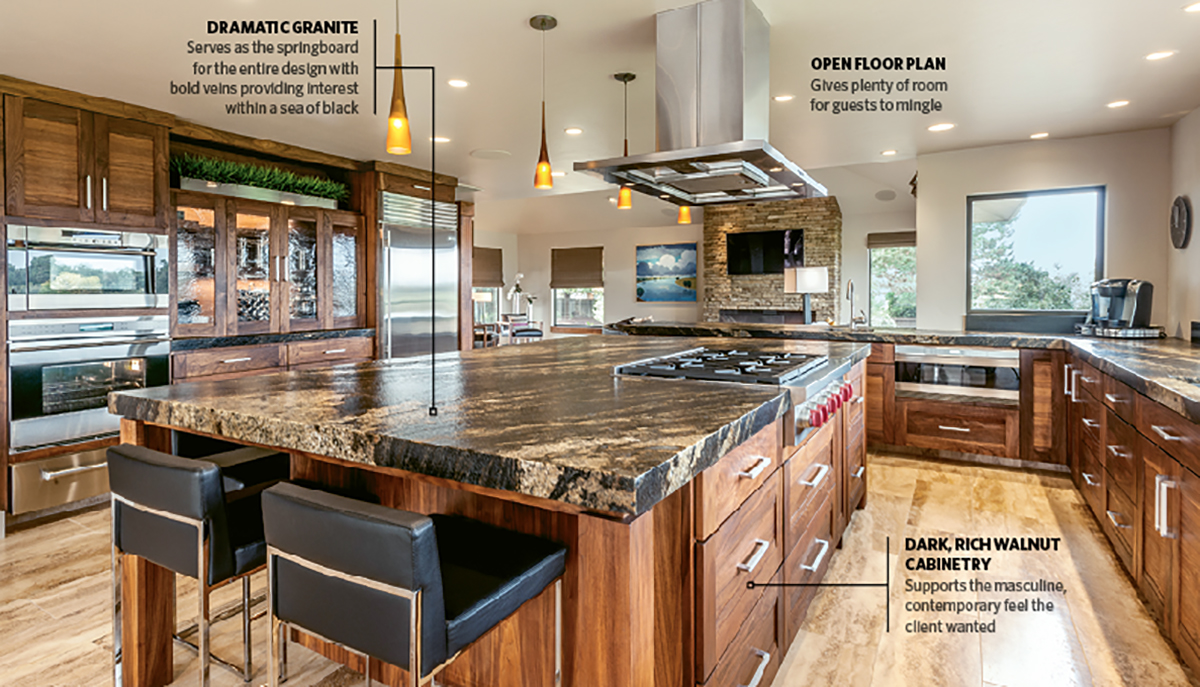 TURLOCK, CA — Many home transformations bear little resemblance to their former selves. This Turlock, CA, home offers a perfect illustration of this: Design Classics’ Jim Madsen renovated every room indoors, as well as outdoors, to provide a more masculine, clutter-free look, with the help of Madsen Construction & Design, which served as general contractor for the project.

Built in the early 1980s on a bluff lot overlooking a river, the home’s kitchen boasted characteristic golden oak cabinetry/flooring and laminate countertops reminiscent of the time. A small island served as a cooking center, housing the stove and prep sink, while a peninsula overlooked the breakfast nook. Additionally, a small garden window offered the slightest glimpse to the outdoors, which included several multi-level decks and lots of stairs. One bright spot included a small golf course the homeowner built after purchasing the home in 1994, but ultimately few, if any, of the original features proved favorable to his lifestyle long-term.

“He was ready for a change,” says Madsen, professional building designer and certified interior designer. “Over the years, he felt the weight of all the clutter, and he realized the home was not conducive to the kind of entertaining he wanted to do. As a nut broker and farmer, he frequently meets buyers from all over the world, so he wanted to be able to throw parties at his home rather than at a restaurant or country club.”

The massive, whole-house remodel touched every room, but at its heart is the kitchen. Madsen enlarged its footprint by taking over the breakfast nook and an unused bedroom, which became part of a new walk-in pantry, wet bar and laundry room. Additional foundational changes included enclosing a small covered porch, which was converted into the adjacent dining room. The designer also opened the kitchen to the living room by relocating a spiral staircase that separated the two spaces.

“The staircase was beautiful and architectural, but it didn’t allow for entertaining between the rooms,” he reports, noting that the new layout simplified the flow between spaces. “The living room was tiny, and guests couldn’t be in one room and talk to someone else in the other. Ultimately, the remodel was about how to make his home a better place for entertaining while taking advantage of the view and getting rid of the clutter.”

To realize the spectacular view, Madsen removed upper cabinetry along the exterior wall, as well as between the living room and kitchen. He replaced it with a wall of windows that extends from the living room, through the kitchen, into the dining room and around the corner of the house. One window spans an unobstructed 14′ view from the kitchen sink.

Madsen then filled the footprint with design elements that offer contemporary lines and a masculine feel for his bachelor client. “I have worked with him on other projects, so I know the kind of person he is,” he remarks. “He didn’t want a contemporary style with white cabinets and white quartz. He wanted clean lines and the non-cluttered look of contemporary styling, but with rich, natural colors. And because of the generous footprint, we had the space to work with dark materials.”

To accommodate, Madsen chose 12″x36″ vein-cut travertine planks that provide a wood look for the floor. Custom, hand-oiled walnut cabinetry from Best Cabinets is dressed with European Designers Imports hardware that offers a combination of a polished chrome foot with a brushed chrome handle. “The rich, oiled look of the walnut is stunning!” he states. “And the unique hardware provides a perfect complement that is more interesting than a typical brushed handle.”

The designer topped the island and perimeter cabinets with Spectrus granite that features a leathered finish and showcases dramatic veins of gray, gold and rust amid a sea of black. Absolute Black granite window sills offer harmony.

“When I found this [Spectrus] granite I knew it would be a springboard for the rest of the kitchen,” he notes. “The leathered finish is very textural…everyone always wants to touch it.”

The designer was fortunate to find a single slab large enough for the 7’x10′ island. “I would have changed the design of the island to accommodate a smaller slab because I didn’t want any seams running through the veins,” he says. “We worked hard to get it just right. Combined with the walnut cabinets, we hit the nail on the head.”

Because his client entertains frequently, Madsen included professional-style appliances, including a Wolf steam oven, wall oven and warming drawer along the same wall as a 36″ Sub-Zero refrigerator. Between the ovens/warming drawer column is a baking center ‘hutch,’ complete with textured glass bi-fold doors that allow LED accent lights to shine through. “It’s a great place for his coffee maker,” he says. “The countertop also serves as a place to set food just out of the oven.” On the back side of this wall, Madsen added the walk-in pantry to provide additional storage forfeited by the elimination of most upper cabinets.

A Wolf microwave drawer in the perimeter cabinetry and a Perlick beverage refrigerator in the wet bar area round out the appliances, giving him all the necessary equipment for entertaining and, if need be, accommodating a caterer.

The open floor plan also includes a small desk area and an Urban Hardwoods dining table made from reclaimed walnut. A wet bar showcases many of the same elements as the kitchen, including walnut cabinetry and Spectrus granite.

“I love the veining in this granite, and I am fascinated with its beauty,” relays Madsen. “I wanted to be able to use it on a vertical surface, so I used the same slab for the backsplash and countertop so you can see the flow of the veins. It almost looks like a piece of art. There are thousands of different glass tiles that would have worked for a backsplash, but this was the only area where they would have been used, and I didn’t want to introduce another surface into the design.” ▪