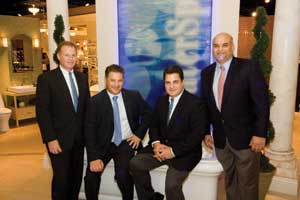 NATICK, MA— In the current economy, many businesses have scaled back expansion efforts with the bottom line in mind.

Ardente Supply is using its competitors’ hesitation to its advantage, opening a new showroom, a branch of its WaterSpot retail division, in Natick, MA. At 10,000 square feet, the new location is the largest of the company’s four showrooms. The others are located in Rhode Island in Westerly, Woonsocket and Providence, the firm’s headquarters.

Paul Ardente, co-owner of Ardente Supply, says the new WaterSpot kitchen and bath showroom, which specializes in faucets, fixtures and decorative hardware, was the result of moving its existing showroom to a better location. “We moved about five miles from our last location where we had only 5,000 square feet. The new location is in a more affluent town, closer to the Wellesley/Newton area.”

Ardente says the build out was minimal and that, from start to finish, the new space was operational within six weeks. The showroom was designed in conjunction with SHI Huntington, but some of the structure’s existing features made the transition easy.

A change for the company was the addition and expansion of lighting and hardware. “We have a broad lighting offering now, as well as decorative hardware, cabinet hardware, hinges and lock sets, among others,” notes Ardente.

The new showroom also left space for Ardente and company to add in technological goodies. “We have one plasma TV that plays a loop. We have the Robern uplift cabinet that has the LED TV behind it, as well. We have a conference room with a big plasma TV in it that we use for training,” says Ardente, who adds that an emphasis is placed companywide on training. “I am a big supporter of training; and I let the staff take advantage of anything that is out there in terms of bettering themselves.”

As for staffing the showroom, Ardente says it’s a work-in-progress, but that customer service and a knowledgeable sales staff is the company’s top priority.

The location currently has a receptionist as well as three salespeople, each with more than 20 years’ experience in the industry.

Ardente Supply is a family owned and operated company; the four Ardente brothers had, up until three years ago, two locations.

“We have a very pro-business governor in Rhode Island and he started Road Builders, a consortium of about five local businesses that meet once a week,” says Ardente. “Prior to our expansion, we talked about our business in an open forum and had two liaisons come in and pick our business apart to figure out where we should be growing and where we should be shrinking. It really opened our eyes; we realized the wholesale side wasn’t where we should be expanding, but that the retail side was.”

Two years ago, Ardente Supply purchased Thompson Durkee. “That’s where the WaterSpot name came from because that was what their showroom was called. So we took that and rebranded and remarketed it.” Ardente Supply remains the name of the wholesale operation, while WaterSpot is the company’s retail arm.

“We also have a stunning fluorescent blue display, designed by SHI, made of etched glass,” says Ardente. “They etch the glass and install behind it LED tape from WAC Lighting – they tape around the outside of the sign. We backlight it and the color changes.”

Ardente says his company has a focus on sustainability and tries to promote products that add energy efficiency to a project.

“To use LED in the entire showroom is kind of cost prohibitive at this point, but we are going to change all of the fixtures to LED bulbs. On the wholesale side of things we even sell solar heat, so we’re toying with the idea of putting solar panels on all of the buildings to create interest,” he says.

Other moves to create interest in the showroom include what Ardente calls a “tremendous advertising campaign.

“We’re going to try to provide accredited courses to members of the local design community who are working toward accreditation – so we’ll be hosting some of those events.” He adds, “I think hosting events in the showroom is the best way to facilitate things. Word of mouth is the best advertising.”