Two years after remodeling their kitchen, the owners of this eclectic bayside home in San Diego asked Jackson Design and Remodeling to overhaul their master bath as well. The top-floor room harbors impressive views of the open water and sailboats just outside its windows, but the space suffered from a cramped design and a lack of storage options, which compromised functionality.

The clients, who sail around the world together, wanted to implement a contemporary yet artistic aesthetic in the room. A new design would have to be accomplished within the existing footprint, however, because no additional floor space could be integrated. Jackson Design and Remodeling delivered a vibrant bathroom that maximizes the compact area and also embraces the spirit of the bay. 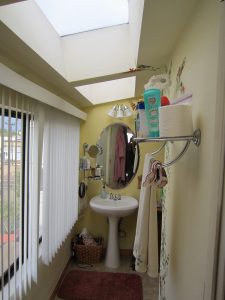 “[Despite] being the master bathroom, it was a very small space,” says Sol Quintana Wagoner, senior interior designer for Jackson Design and Remodeling. “They didn’t have much storage at all. When you came into the room, the shower was on the right side behind [the interior] wall.”

The company replaced that wall with a glass partition but had to preserve the column at one end of the shower (near the middle of the room) to support the ceiling. Removing the opaque barrier produced a clean line of sight and created a sense of airiness within the space. New double-pane windows with interior shades provide increased comfort and energy savings—as well as privacy. 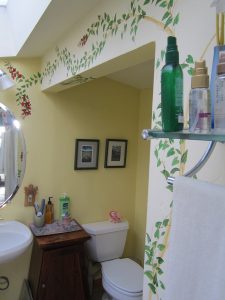 “Visually that makes the bathroom feel a lot more open,” Quintana Wagoner says. “The shower was in a dark niche, but now it gets light from [the windows on] the left side.”

The original shower had been utilitarian and showcased a banal design of white square tiles with outdated fixtures. The clients sought a shower head, a hand-held fixture and multiple body sprays but desired a single tower to supply them with water; however, regulations in California prohibit this configuration, so Jackson Design and Remodeling devised an imaginative technical solution.

Glass tile walls that reflect natural light from the windows now enclose the shower and generate a perception of more space. An undulating 3-D pattern in the tile ripples across both walls of the shower and continues flowing to the back of the room, evoking the feeling of an endless horizon and also strengthening the illusion of spaciousness in an area framed by white to accentuate its detail. 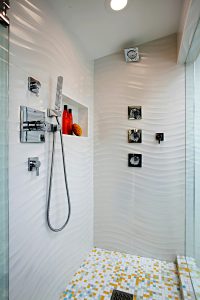 A new medicine cabinet on the back wall with mirrors that help enlarge the space required some meticulous measuring for exact placement. The mirrors needed lighting but none could be added above the cabinet because of its proximity to the ceiling—and thus the roof—so Jackson Design and Remodeling placed slim lights on both sides for ample illumination plus stylish minimalism.

“There wasn’t enough room between the ceiling and the roof to put in can lights, so those are the lights [we installed] in the bathroom,” Quintana Wagoner notes.

Multiple shelves inside the cabinet afford the homeowners with abundant organized storage, and mirrored surfaces inside and out bounce the light to expand the space visually. A bamboo vanity contains a sink with modern fixtures selected in a deliberately small scale to accommodate more countertop area, and its roomy drawers feature extensive space for storing linens and other items.

The company planned and applied every detail in the new bathroom design carefully to show an artistic modern style. The modest-scale toilet has a clean, simple shape with closed skirt and soft edges. A rectangle of yellow glass framed in chrome on the tile wall near the commode conceals a linen closet and injects unanticipated color (yellow being a client favorite) and texture into the space. 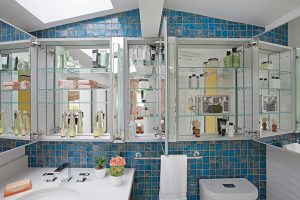 The linen closet mimics a floating pantry and opens into four pull-out drawers that offer copious storage opportunities. A walk-in closet on the other side of the wall donated the space necessary for Jackson Design and Remodeling to fabricate the recessed cabinet, an idea Quintana Wagoner suggested to create a resourceful storage solution and incorporate a splash of color into the room. 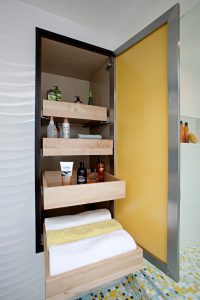 Quintana Wagoner also recommended the installation of operable skylights in place of existing models to aid air flow and ensure the space does not become uncomfortably hot on sunny days, which had been an issue for the clients. 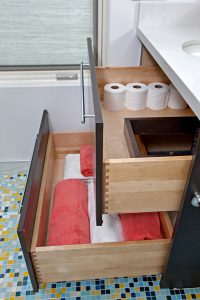 Dark blue glass tiles interwoven with streams of copper decorate the back wall and represent the sea. The clients own a boating timeshare and travel to places such as Italy, where they rent a boat for a week and sail to another locale before flying back to San Diego, so they wanted to establish an abstract design concept that would convey their fondness for the open water as well as sailing.

The tile floor emerging from the back wall encompasses varied hues of yellow, blue and white to emulate a sparkling wave coming ashore. Each section of the tile called for careful consideration regarding how the eye would comprehend the effect, which runs from the deep blue wall down to the floor, becoming lighter and less condensed across to the shower just like water sweeps over sand.

“We chose a blend of the different colors that [the clients] like, which were the blues, yellows and whites,” Quintana Wagoner says. “The idea was to have the wall at the back include some copper. That represented a sunlit ocean, and its color washing off to the other side—the entry of the bathroom—which is finished in white, so it feels like ocean waves washing off on the sand.” 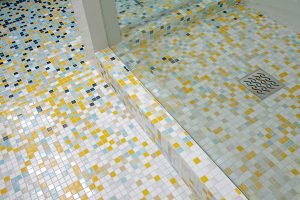 The flooring design creates a semblance of texture that makes the clients feel like they step onto sand every time they enter the bathroom. This newfound openness of the space also generates an unencumbered sensation of showering outside. Jackson Design and Remodeling has been tasked to redo the guest bedroom and bathroom for the couple, who clearly have become clients for life. | QR