Mastering the art of Industrial 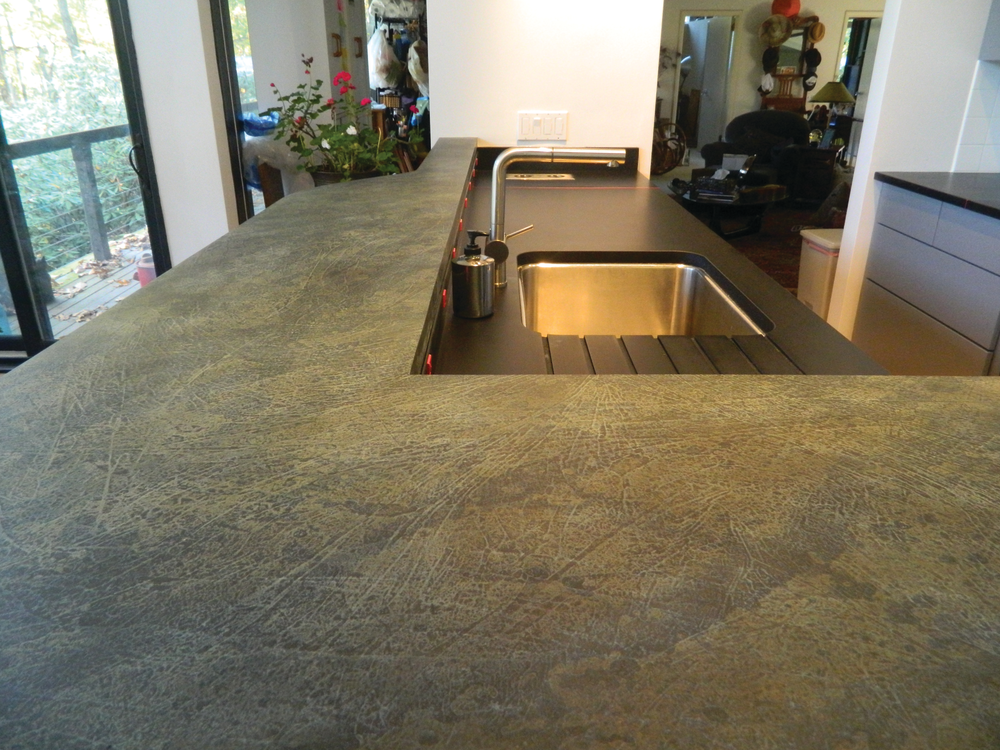 VALLEY FORGE, PA – When Larry Palmer was a student studying for his master of fine arts degree at the University of Chicago, he had his first experience with zinc plate etching, experimenting with the metal in one of his classes. But it wasn’t until the designer and owner/president of Hunter Group Construction Company in Valley Forge, Pennsylvania, was commissioned to do a whole house renovation/addition for a neighbor that the art form took on a much grander scale.

His clients’ goal was to increase the square footage of their mid-1960s home by about 50%, giving it a New York contemporary/industrial feel in the process. The task required extensive structural changes to the inside, as well as the outside, of the home. Palmer created a new master bedroom suite, added a garage with poured concrete walls, raised some elevations and roof lines, and increased deck areas – which include a nearly 350-lineal-foot main deck that sits above the garage and a third-floor deck accessed by a spiral staircase. In the kitchen, one lone wall was all that remained from the original footprint.

The industrial theme of the home is accentuated by highlights of custom-etched zinc plating. On the inside, it sheaths the eat-in kitchen counter and its facing as well as ceiling beams used throughout the space. On the outside, zinc panels conceal the deck framing and are intermingled with stucco on several walls to create a look reminiscent of Japanese wall panels, accented by landscaping suggestive of the Asian culture.

Palmer acid-etched the 22-gauge sheets of zinc to create the desired color, patina and pattern, then fabricated it on site. The process is actually very flexible, providing the ability to obtain an array of different looks. “Depending on the color and the patina, the process can take anywhere from a week to three months,” he says. “You can do pretty much anything with patterns, even create portraits. It just depends on where you place the acid and how much you use. And there are a number of different chemicals you can use to treat the surfaces to change the color, anything from grays to blacks to reds to greens. You’re really only limited by your imagination.”

Palmer notes that zinc is also very durable, although he indicates that to prevent it from turning a dull gray, he treated the pieces with Permalac, an indoor/outdoor clear coat lacquer.

The etched zinc in the kitchen is complemented with several features that continue the industrial theme, including black epoxy resin countertops for work surfaces at the sink and range, sleek cabinetry painted a cool steel gray, stainless GE Profile appliances, Blanco fixtures and a loft with railing made from stainless steel aircraft cables and railroad ties.

The epoxy countertops are reminiscent of those used in school laboratories, notes Palmer. They are joined with a bold line of red epoxy. “My clients knew the seam would be visible, even if they used black epoxy,” he says. “So they decided to make a statement!”

The backsplash behind the sink is the same epoxy resin as the countertops and is accented with recessed red electrical outlets.

Custom cabinetry consists of hardwood frames with birch doors finished with a two-part epoxy paint and conversion varnish to protect the surface and provide for easy cleaning.

Marry the inside with the outside

With nearly 21-foot-high vaulted ceilings, Palmer had enough space to tuck a sitting area/loft that overlooks the kitchen and dining area. “With the aircraft cable and railroad tie railing, it adds some interesting architectural features to the room,” he says. “And, it continues the industrial theme of the home. Adding a couple of chairs and a table provides a place for the homeowners to hang out and enjoy the spectacular views.”

The railing used in the loft area is the same railing used on the deck areas outside. “The idea was to merge the interior and the exterior of the home,” Palmer notes. “There’s quite a bit of repetition between the inside and outside.”

That marriage is important because there is so much glass in the home, he explains. Many windows run floor to ceiling and a wall of glass provides a view of the homeowner’s property from the dining area. Windows are encased inside and outside with Honduras mahogany painted black to match the countertops. “Because the sills underneath the windows are on both sides we needed a wood that be weather resistant and look good,” he says.

The house is built into a bank, Palmer continues. “The bedrooms are in the basement and the kitchen is on the second, or main, floor which sits about 12 feet out of the ground. The property has a lot of trees so with the orientation of the home, the homeowners can look out into the trees. It has a quasi Fallingwater look to it where you don’t see the bottoms or the tops of the trees; you’re kind of ‘in’ the trees. It’s a bit of a tree house feel, aka Frank Lloyd Wright with some Japanese overtones to it. This is really a one-of-a-kind home … a bit eclectic with a New York industrial theme.”