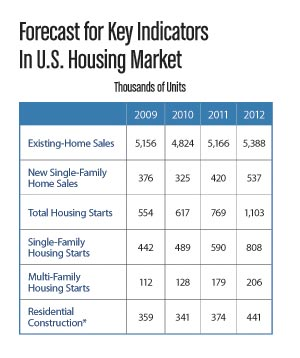 The nation’s housing market is experiencing a slow, uneven recovery that should improve, along with the overall economy, as 2011 unfolds, according to most forecasts (see related story, Page 32). Among the key statistics and forecasts released by government agencies, research firms and industry-related trade associations in recent weeks were the following:

HOUSING STARTS
Home builders “continue to be very cautious,” while the housing market is running “at a steady, but slow rate,” according to the National Association of Home Builders. The Washington, DC-based NAHB said in late November that builders are starting to report some improvement in buyer demand, which should gradually translate into more sales activity, and more starts, as the economy strengthens. Nationwide housing starts were running at a seasonally adjusted annual rate of 519,000 units for 2010, according to the latest government report. A marginal uptick is expected in 2011 (see related table at right).

EXISTING-HOME SALES
The recent sales pattern for the nation’s existing homes is expected to continue, since the housing market is experiencing “an uneven recovery,” while a temporary foreclosure stoppage in some states is likely to hold back a number of completed sales, the National Association of Realtors said last month. Despite this, sales activity “is clearly off the bottom and is attempting to settle into normal sustainable levels” – and, based on current and improving job market conditions, and from attractive affordability conditions, sales should steadily improve to healthier levels of above 5 million by spring of 2011, the NAR predicted (see related table at right). Year-to-date through October 2010, there were 4.149 million existing-home sales, down 2.9% from the 4.272 million sales posted at the same time in 2009, the NAR said.

APPLIANCE SHIPMENTS
Domestic shipments of major home appliances continued their modest year-to-date gains through October 2010, posting a slight gain compared to October 2009, according to the Association of Home Appliance Manufacturers. The Washington, DC-based AHAM reported last month that year-to-date shipments through October 2010 totaled 50.99 million units, up 2.9% from the 50.54 million units shipped during the same 10-month time period in 2009. While results by product category were mixed, gains were posted for gas and electric cooking appliances, kitchen cleanup and food preservation products.

CABINET & VANITY SALES
Sales of kitchen cabinets and bathroom vanities declined once again in October 2010 compared to the same month a year earlier, the Kitchen Cabinet Manufacturers Association said last month. According to the Reston, VA-based KCMA, manufacturers participating in the association’s monthly “Trend of Business” survey reported that overall cabinet sales declined 11.7% in October 2010, compared to October of 2009. Sales of stock cabinets fell 17.6%, while semi-custom sales declined 4.5% and custom cabinet sales dipped 15.2%, the KCMA reported. Year-to-date sales through the first 10 months of 2010 were down 2.6% compared to the January-October period of 2009, the KCMA added.

Washington, DC — Although the recent trend of rising long-term borrowing rates may mean higher mortgages for consumers in the coming months, the greater obstacles to housing market recovery are job creation and the availability of credit, according to a National Association of Realtors analysis.

“Modest changes in mortgage rates are less important to a housing market recovery than the number of people who are able to obtain mortgages,” said Lawrence Yun, chief economist for the Washington, DC-based NAR, which has urged the mortgage lending industry to amend policies so that more qualified people can become homeowners.

“Currently, the overly tight underwriting standards are holding back the pace of housing market recovery,” said Yun. “In particular, credit-worthy small business owners and those who want to purchase investor properties have encountered extreme difficulties in obtaining a mortgage.”

If the Bush tax cuts were to be extended for those earning less than $250,000, but taxes are increased for higher earners, Yun said he expects about 1.5 million net new jobs to be added to the economy in 2011.