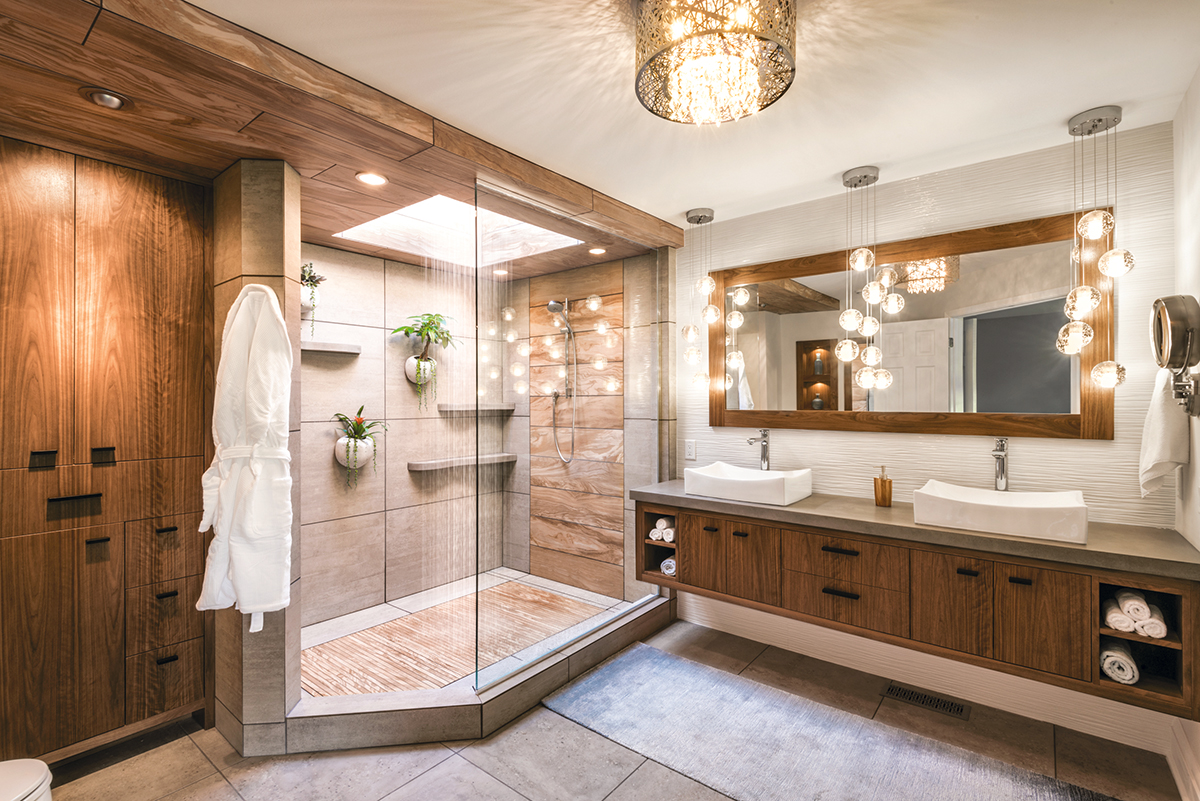 Minneapolis, MN­ — One wouldn’t expect to see an alfresco shower in Minneapolis given the city’s geographic location and seasonally challenging environment. But Paul Linnebach gave his client the next best thing, using the concept as inspiration for this master bath remodel.

“In the course of design, there is often a playfulness that comes from international travels I have done,” says the designer and owner of Mantis Design + Build, based here. “One place that has inspired me is Bali and how its people connect their showers to the outdoors…how they blend these spaces together. Admittedly it’s the tropics where they have greater flexibility, but some of that inspiration filtered into this bath.”

Most notable is the spacious, focal-point shower, which features an oversized 16″ rainhead set inside a nearly 4′ square skylight that provides a unique and generous view to the outdoors.

“It creates a luxurious showering experience that gives the illusion of water falling from the sky above,” says Linnebach. “Having the connection to the outdoors and being able to look up into the skylight provides such a wonderful experience for my client. She has told me she now has a hard time getting out of the shower, and that showering is one of the best parts of her day!”

That revelation showcases the vast improvement from her previous oddly configured bathroom, which included a giant corner tub that senselessly stole center stage beneath the skylight and took up a significant amount of floor space. Other inefficiencies included a one-person shower that was a challenge to access, given its location.

“She never used the tub,” he says, noting that a nearby bathroom offered one should she decide to take a bath. “Also, the shower was surprisingly small for the space, and she had to squeeze past the toilet to get to it. When we considered the new space, we wanted to create something that would better serve how she actually uses it…something that perfectly fit her rhythm and lifestyle.”

That meant taking a good look at the tub and skylight, two potential problems, with a subsequent resolution that eliminated the former and showcased the latter.

“It dawned on me what could be possible,” he says in reference to the new shower and skylight combination. “The solution would not only be super beautiful, but it would also be a major feature that offered a showering experience like no other.”

To eliminate potential issues associated with moisture and humidity, Linnebach designed a ventilation system that draws air from the top of the skylight and vents it to the exterior. “We were concerned about condensation with extreme cold in the winter as well as extra heat in the summer, but it works fabulously,” he says.

“The ‘wood’ tile gives the space a rich, organic feel, without the maintenance of real wood,” he says. “We wanted the space to feel warm, organic and connected to the outdoors… in a place that is not.”

The wood-look tiles are repeated on the ceiling and serve as a horizontal accent behind the hand-held Hansgrohe showerhead, where each tile was meticulously placed and set to provide visual continuity and give the impression of real wood. All corners were also mitered by hand to create a clean look as well as provide consistent grout widths throughout. “We planned out each piece,” he says. “When you look at the tile, it’s hard to find any that are similar.”

As a complement, Linnebach added slender, slat-style Etic Ulivo Tatami tiles on the floor to simulate an actual Tatami mat. The warmth of these wood tiles mixes with the coolness provided by Provenza’s large-format 2’x4′ Re-Use Concrete tile on the shower walls as well as the Beige Concrete tiles by Fioranese on the floor.

“The combination of tile strikes a balance between modern industrial and elegant urban chic, with a hint of globalness,” he says. “It’s a nice blend, without leaning too heavily toward one particular style. Also, the neutral color palette gives her the ability to change the feeling of her bath quickly by bringing in elements such as colored towels.”

Additional shower features include custom concrete shelves, color-matched to the tile, which add interest and provide a place to set toiletries, candles or décor. “Their flowing contours keep sharp edges out of the shower while helping to break up the strong linear lines,” he notes.

To further enhance the feel of an open-air shower and integrate biophilic design elements, Linnebach added custom ceramic planters designed in collaboration with Julie Asbury, a ceramic artist in Portland, OR. He attached the planters to the shower walls via stainless steel mounts, which were designed to be beautiful even if the planters are removed. “People who see this bathroom on Houzz often comment about the planters,” he says. “There is plenty of light brought into the shower area via the skylight, so being able to add some plants brings life into the space.”

While the shower takes center stage, Linnebach took special note of other elements within the space. The custom walnut floating vanity is accented with Schaub Select matte black pulls and is topped with concrete that is custom color-matched to the tile. Lighting beneath is motion activated to serve as a night light.

“The floating vanity makes the room feel larger,” he says. “It also gives a clean, modern feel to the room.”

The designer completed the vanity with dual Decolav sinks – which feature graceful curves that counter the abundance of linear elements – and single-handle Hansgrohe faucets. The custom mirror stretches across the wall, which is sheathed floor-to-ceiling in Atlas Concorde’s 3D/Wave White Glossy tile.

“The tile gives a bit of sparkle and elegance and tones down the masculinity of the concrete,” he says.

Cascading Bocci pendant spheres add an elegant yet playful touch, along with well-positioned illumination along the vanity wall. Additional lighting is offered by can lights in the shower and an Elegant Lighting flush-mount chandelier on the ceiling.

“We wanted a light that would cast shadows on the ceiling to give interest and depth to an otherwise large, bland space,” he says.

Additional lighting, which is motion activated to turn on with the undercabinet vanity lighting, is featured in the custom shelf niche behind the toilet. Crafted from walnut, it matches other walnut elements used throughout the space, including the adjacent linen cabinet.

“The linen cabinet was a nice addition to the space,” he says, noting that its location takes advantage of the tight space occupied by the former shower. “We took advantage of the extra depth in that area to create a deep linen cabinet for extra toiletries. We also added a built-in hamper and accessory drawers.” ▪