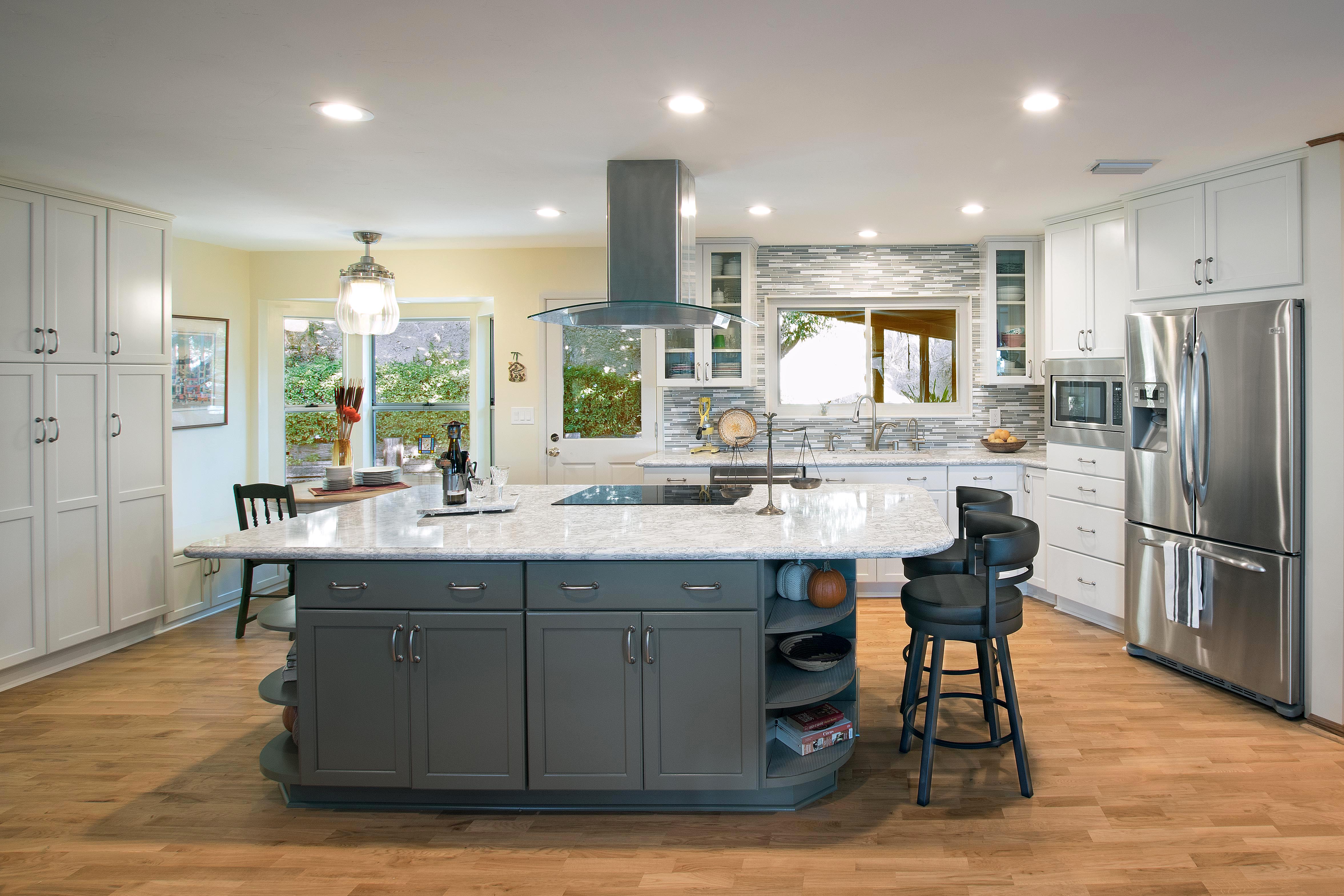 Stevens removed a load-bearing wall in this prefabricated home, requiring a complicated engineering drawing. However, once done, it transformed the kitchen from a tight, almost claustrophobic space into a beautiful open and inviting kitchen.

TUSTIN, CA — Alex Stevens, CKD, has worked at every level imaginable in the kitchen and bath field – from plumbing, painting, tiling and installing to manufacturing custom cabinetry, before moving into kitchen and bath design full time. The breadth of experience acquired prior to becoming a kitchen and bath designer allows him to chime in on any conversation with various installers, manufacturers, plumbers and electricians, allowing him not only to “talk tech,” but also to translate the various “tradespeak” to his customers.

ANEW IS MADE ANEW

Stevens started in the industry after high school working with a plumber, and went on to work as a tiler, painter and window installer until he found his ‘fit’ in kitchen cabinet installation. After a few years, Stevens rose to operations manager.

Eventually he decided to open his own custom cabinet shop – Alexander’s Cabinetique in Southern California in 1991 – and he received his contractor’s license by 1992. The company grew and evolved, entering the new millennium incorporated and under a new name – Anew Kitchen, Inc.

The blossoming company meant other changes needed to be made. Every order that left the shop needed to have Stevens’ seal of approval, but this often left him working late nights rebuilding cabinets to his standards. Stevens was faced with either upgrading to automated machinery or signing with a pre-made line of cabinets.

In 2002, after much consideration, Stevens closed his cabinet manufacturing line and began selling KraftMaid cabinets in his newly opened showroom in Los Alamitos, CA. He quickly tripled his sales volume and began to pursue his CKD.

“After I opened my showroom, I felt like it was time to get serious about my profession,” Stevens explains.

Business continued to boom until the recession hit; then, like many firms, Anew was forced to close its showroom, though Stevens continued to sell cabinetry for kitchens and baths, ultimately recovering enough to acquire another contractor license in 2010.

Further growth from there allowed Anew to open a new showroom in Tustin, CA in 2013, causing it to transform again into “Anew Kitchen and Bath Design Experience.” Here, Stevens, as lead designer and owner, offers kitchen, bath and whole-house remodeling.

This variety of products offered by the company reflects Stevens’ range of knowledge, and he shares, “I think the fact that I personally have built cabinets, fabricated counters and done all aspects of electrical and plumbing as well as being a certified designer brings a unique perspective to our practice.”

“When they start using their jargon or citing codes, I can chime right it in and keep the communication going freely without having to ask for explanation or interpretation,” he explains. “For my clients, it helps because I can mediate for them and explain things in a simpler way. It also helps when the client really doesn’t get something, that I can create a simple or complex drawing for them to visually see what I am talking about.”

He also believes his multifaceted background can help keep costs lower for his clients.

Stevens’ goal for each client is to create a customized design that is both on time and on budget, providing renderings or detailed drawings and timelines for each project so customers know what to expect, while keeping all the pieces moving in a timely fashion.

He says he is never afraid to go for a unique design for his clients, and he adds that, even when budget is an issue, he tries to provide custom touches. For example, “We try to make a personal door design or finish or create that one-of-a-kind built-in or island,” he comments.

Many of these custom touches appear on his website (www.anewkitcheninc.com), where an extensive photo gallery helps to promote his business.

He adds that one of his personal challenges is avoiding the temptation to design to the installation. “I have to watch that because it inhibits creativity. The design needs to be able to work, construction wise, but not be held back because of preconceived constraints on how difficult it may be to install. On the other hand, I can have the courage to take some risks with designs that I know I could install.”

One notable project for Stevens was a kitchen remodel in a circa-1920s home. The major challenges included re-working the structural engineering of the home in order to create an open kitchen while still maintaining the standards of the city for registered historic homes.

“We custom fit ½” white oak to match the existing floor and re-finished it with a clear coat and light honey stain,” Stevens details. “This was a huge undertaking.”

Stevens works to stay up to date on the latest design trends, and sees many homeowners  looking for automation and incorporating digital items such as automated lighting, voice-activated recipe searches and docking stations.

In Southern California, Stevens often encounters requests for naturally lit areas, beach themes and outdoors kitchen. He notes that he previously did design for a national outdoor kitchen appliance company, and would like to take on more outdoor kitchen projects in the future.

“It’s really the same as interior kitchens for landing spaces and working areas, whether you use a triangle or flow pattern,” he notes, adding, “[One thing] that I see missed [with outdoor kitchens] is that the base of the island should be raised an inch or so and be made of a waterproof material. You should allow for natural and directed water flow patterns to run through your system and not dam it up.”

Other special considerations for these spaces include proper breathing vents for grills and extra space between appliances, allowing room for stone veneers, if desired, Stevens adds.  ▪