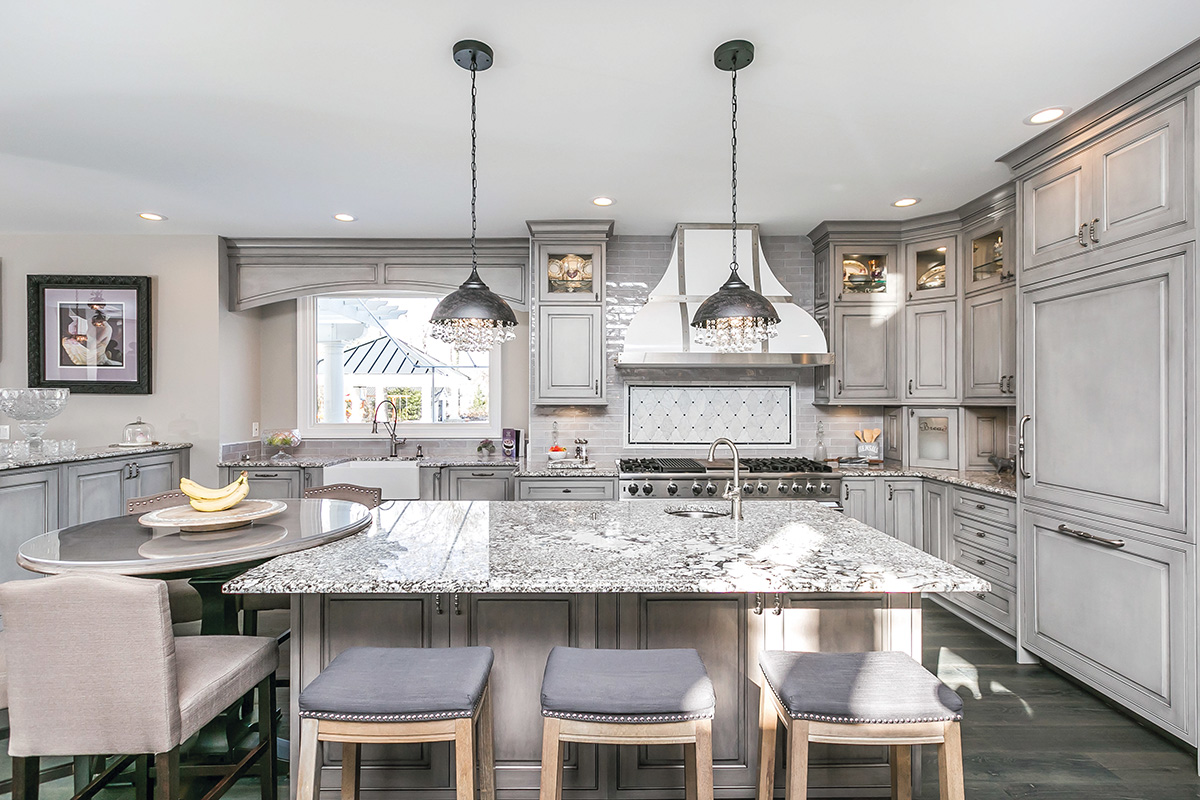 PASADENA, MD — At virtually any point in time there could be throngs of people gathered in this residence, enjoying each other’s company, a family sit-down or buffet-style meal, or even a football game.

“Both the husband and wife are from very large, Italian families,” says Paula Shantzis, designer, Elements of the Home in Severna Park, MD. “It can be a very boisterous environment, but they love to entertain and their home is where everyone comes together.”

The couple’s desire to adequately host guests, as well as meet the needs of their own young kids, played an important role in the design of their renovated kitchen, which began by removing a wall to create an open-concept space that also includes the dining room and family room. 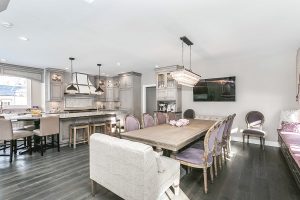 Providing plenty of seating for her clients’ large families was critical to the design of the open space, so Shantzis included stools at the island overhang as well as at the attached table, which also coordinate with the nearby dining table that can seat up to 12 more people. The designer continued the theme of extra seating by also incorporating a window bench in the dining room.
Photos: Hometrack Real Estate Marketing

In the kitchen, the generously sized, 60″-wide, white, dual-fuel Viking range accommodates the family’s cooking needs via its six burners, grill, griddle and two full-size ovens. Complemented by a stainless steel Vent-A-Hood range hood, which is powder coated in white to match and accented with stainless steel bands and brass hex nuts, the duo makes a striking focal point.

“The hood is an amazing piece and it served as inspiration for the space,” Shantzis says, noting its unique mix of traditional styling that leans towards ‘Old World’ combined with a contemporary color palette reflective of her clients’ millennial status, given she was in her mid-20s and he was in his mid-30s at the start of the renovation. “Her taste is very traditional, sort of ‘Old World Italian’ to match her heritage, which is evident in cabinetry details such as the raised panels and beautiful columns around the sink. Yet the space is very current with the colors we used, as well as with the additional elements such as the crystal lighting fixtures above the island and dining table. She’s a bit of an old soul, but very youthful…a beautiful mix of Old World meets millennial.”

To further enhance the aesthetics of the cooking wall, Shantzis covered it with 2.5″x9.5″ Lunada Bay Shinju smooth ceramic tiles in Moonstone. Above the range she added a 49″x16″ mural comprised of custom Galeria Marble Carrara marble mosaic from its Flow Collection with black glass dots and pencil trim.

Because of the room’s considerable footprint, the designer was able to include multiple focal points, with a secondary focus being the adjacent sink area, which also includes a paneled Viking dishwasher. It is highlighted with a commanding arch above the window which, in style, matches the rest of the cabinetry installed by Combs Custom Carpentry. Because her client also loves to bake, this area of the kitchen doubles as a baking center. The addition of a buffet bar enhances its functionality during large gatherings.

“The range and sink are next to each other, but they don’t fight with each other because the kitchen is so large,” she says. 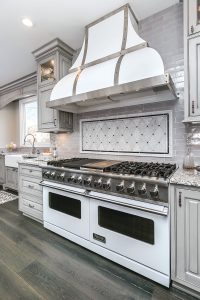 The kitchen’s perimeter also includes an armoire, which functions as a coffee station and houses the microwave, the latter of which is concealed behind pocket doors that recede into the cabinet. Additionally, it serves as a transition between the kitchen and dining room. The Bremtown Cabinetry piece is sheathed with a Dove finish and a black glaze that matches the rest of the perimeter cabinets but provides distinction from the island, which is painted Angel White with the same black glaze to tie the pieces together.

“Elements don’t have to be too matchy-matchy,” says Shantzis. “They should have a reference to each other, such as the same color tone or shape, to create a rhythm and harmony that gives your eye a chance to rest, but they don’t have to match exactly.”

To provide further differentiation between the armoire and the rest of the kitchen, the designer added a soapstone countertop to contrast with the Oyster White granite perimeter and island tops.

“Soapstone has such a special quality,” she says. “It’s one of the softest looking and feeling materials. And, it adds a touch of Old World feel to the piece.”

The granite is equally beloved by her client since it works beautifully with both colors of cabinets, Shantzis adds.

“We considered a few different materials, including marble-look quartz and white quartz,” she explains, noting their current popularity. “But she wanted something with a bit of pizazz because everything else in this kitchen is pretty simple. In her mind, this has more going on. Plus, this granite has a variety of colors we were working with, such as gray, white, black and taupe, which she especially loved. It offers the perfect combination.”

At the center of it all is the multi-functional island. It boasts plenty of storage and a single-level workspace as well as a second sink positioned conveniently across from the range, “so her sisters can help prep food during large gatherings,” she says.

Shantzis made the island large enough to be highly functional, yet small enough to not impede flow around it, especially when combined with the extra length of the Ethan Allen table attached at one end.

“Creating enough seating was a consideration from the start,” she notes. “My client wanted seating everywhere.” 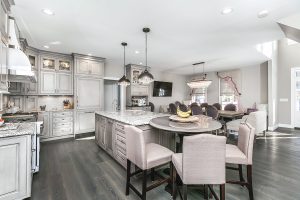 The kitchen’s perimeter also includes an armoire, which functions as a coffee station and houses the microwave. Additionally, it serves as a transition between the kitchen and dining room.
Photos: Hometrack Real Estate Marketing

To accommodate this, the designer included stools at the overhang as well as at the table, which had to be retrofitted slightly in height to slide atop the countertop. The island table also coordinates with the nearby Restoration Hardware dining table, which can seat up to 12 more people, considering two people can sit in each of the settees at each end.

“The table selections go back to the idea of not having everything being the same,” she says. “They don’t match exactly, but they reference each other because they have similar finishes. That was the genesis of the island table. It melds into much more than just the kitchen.”

Shantzis continued the theme of extra seating by also incorporating a window bench in the dining room, crafted from Bremtown Cabinetry that matches in color to the island.

“It’s a perfect place for all the kids to sit and eat,” she says. “And, it’s near enough to the other seating areas so everyone can be together.”

The dining table and window seat accessories were also the ideal places to bring in her client’s favorite color: purple, which inspired the entire color scheme.

“She loves purple, so the dining chairs were a ‘must have,’” she comments. “The cabinetry colors also lent themselves beautifully to using the royal color, without having it overtake the space and be the only ‘star’ of the show.” ▪