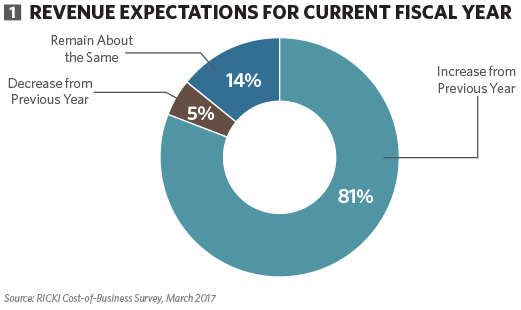 Kitchen and bath design firms are anticipating both revenue and profit-margin growth in the current fiscal year, although today’s robust market is also seeing a sizeable number of businesses impacted by rising labor, product and other costs.

That’s the key conclusion of a major new cost-of-business survey conducted in March among a nationwide cross-section of kitchen and bath dealerships, as well as design firms, ranging in size from one to more than 20 employees. The online survey was conducted on behalf of Kitchen & Bath Design News by its exclusive research partner, the Research Institute for Cooking & Kitchen Intelligence (RICKI).

The KBDN-RICKI survey paints a portrait of a kitchen and bath market whose steady growth is at once benefiting and challenging the businesses that account for the vast majority of kitchens and baths that are professionally designed, sold and installed each year in the U.S.

While facing some challenges – most notably cost pressures, along with customers who have unrealistic budget expectations – surveyed dealers and designers generally feel good about both their current and future business prospects. Revenue, along with profit margins, is reported growing, and is expected to continue to grow in the near future.

According to the survey, the annual revenue for kitchen/bath design firms averaged $900,000 in the last fiscal year. Three in five reported that this revenue represented an increase (an average of 18%) over the previous fiscal year, while 16% reported a decrease and 21% said that revenue was about the same.

The KBDN-RICKI survey also found that four in five surveyed firms anticipate that revenue will increase this year, at an average of 15%. About 14% believe revenue will remain the same as last year, while only 5% expect a decrease (see Graph 1).

It’s anticipated that the revenue growth will derive primarily from selling more projects and focusing on higher-profit-margin projects, rather than from charging more for projects or other revenue-enhancing efforts (see Graph 2).

Profit margins, like revenue, are also expected to rise.

On average, surveyed design firms reported a 29% gross profit margin in their last fiscal year, and the majority (59%) say that they expect to see an increase in margins this year. The increases, they predict, will be due overwhelmingly to revenue increases rather than cost cuts (see Graph 3).

But business costs are rising, too.

Most surveyed design firms indicate that their product costs will increase only slightly or not at all this fiscal year compared to last. The greatest cost increases are anticipated in the area of products, employee compensation and subcontractors. When asked what the most difficult costs to control are, surveyed firms pointed to subcontractor and product costs – not atypical in a market that’s growing and experiencing inevitable labor shortages and rising supplier pricing (see Graph 4).

Almost half of the design firms surveyed report they’ve experienced an increase in the number of installers they employ compared to two years ago. Mid-size and large design firms were more likely than smaller firms to have grown over the past year by adding installers. About a third – particularly those largest in size – report they’ve seen an increase in design and sales personnel.

Comparing today’s spending to that of two years ago, more than half the design firms surveyed say they are spending more on social media, while a third are now spending more for online ads and email marketing. The majority of surveyed design firms plan to spend about the same as they did two years ago for print ads, home shows, trade shows and TV and radio ads.

The greatest business challenge to design firms, survey participants report, lies in working with customers who have unrealistic budget expectations. Other key challenges are the price sensitivity of customers, finding and retaining good employees and the growing number of consumers who are buying online (see Graph 6). ▪