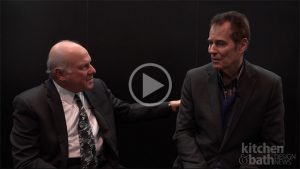 “The main driver of change has been a willingness to listen and learn from dealers, reps and staff,” said Bill French, who last August assumed ownership of the iconic, 77-year-old cabinet brand, seemingly destined for extinction after its unexpected May closure. French is also the owner of Professional Building Systems, Inc., a Middleburg, PA-based manufacturer of custom modular residential, multifamily and commercial housing.

Wood-Mode, French told KBDN, “has made major strides” in recent months, in terms of workforce hiring, fulfilling orders and restoring the faith of its network of 700+ dealers in the U.S. and Canada. The company also produces a semi-custom line, Brookhaven.

According to French, factory operations involving 127 employees were resumed about a month after the acquisition, with initial shipment of new products in late-October. Wood-Mode’s workforce, as of January 1, had expanded to 295 employees, French said. Additional hiring is expected to bring the workforce to some 350 employees by spring, he added. At its height, prior to the 2008 recession, the company had more than double that many workers on its payroll.

For now, French said, a “continued focus on quality and building and supporting our dealer network are uncompromisingly job number one.

“Quality and service are our primary focus and a must for the Wood-Mode brand,” French observed. “Getting these priorities right has helped a great deal with re-building trust among our dealers. Communication and relationships have been our focus, along with partnering with staff, reps, dealers and media.”

According to French, operational changes – including an upgraded systems infrastructure – have resulted in production that’s scheduled more efficiently than in the past, decreasing lead times and increasing complete and on-time percentage. Staff is being utilized “more flexibly,” allowing workers “to flow to different positions as needed,” French said. The factory production work week has also been reconfigured to four 10-hour days from the previous five 8-hour days, he said, adding that some 7,000 cabinets were shipped in 2019, with lead times of 9-10 weeks for Wood-Mode and 8-9 weeks for Brookhaven.

Complete and on-time order percentage is currently at historic highs of 95%-100%, French added, noting that “all products that were available in the past are currently available.”

French said he has also been heavily engaged in what he described as “changing Wood-Mode’s culture.”

“True leadership involves a willingness to listen, learn and make changes,” he said. “Our staff, reps and dealers have valuable experience and input, as well as a desire to help Wood-Mode succeed.

“Culturally, we’re focused on the power of listening, and responding, in a humble and open-minded manner,” French told KBDN. “For the near future, our priority will continue to be the quality and service of our existing product line. Our leadership team is focused on making changes by listening and learning from reps, dealers and staff.”

The company, he said, plans to re-introduce its Product & Design Training Schools in the second or third quarter of 2020, will promote dealers through social media, and will schedule a dealer council meeting this spring.

“I’m focused on listening and learning every day,” French said, “and I’m thankful for the opportunity to build a new Wood-Mode.”