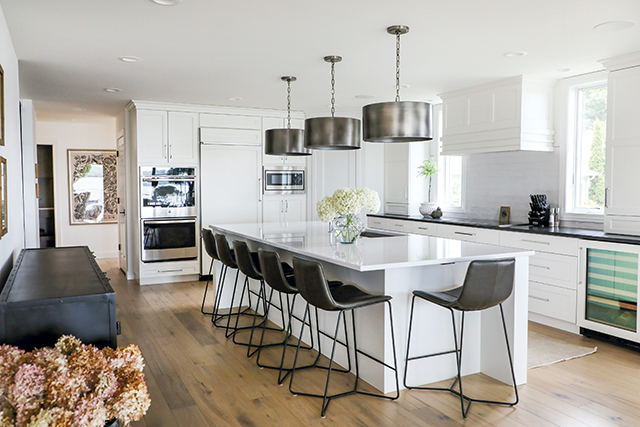 Since there were no windows in the previous kitchen, Langreck added two tall windows, one to each side of the induction cooktop and ventilation hood, to bring more light into the space. Photos: Shanna Wolf Photography

Madison, WI — Space planning is one of Dana Langreck’s favorite parts of a renovation. And the bigger the challenge – such as with this McFarland, WI, renovation where the entire first floor needed to be reconfigured – the bigger the reward.

“I love moving things around and figuring out how to make a space work better,” says Langreck, CKD, CLIPP, of Bella Domicile in Madison, WI.

That skill set worked in perfect harmony with her client’s talents, who, as an interior designer, made the finish selections.

“In this case, my role was to do space planning and execute my client’s vision, to interpret her wishes and make them fit into the space, while Lisa ‘drove the bus’ for material choices,” she says, noting a collaboration with Lisa Baumann of Lisa Baumann Design.

In the original floorplan, the kitchen and dining area were located within one corridor, segregated and cut off from the living room, while in the kitchen, a dry bar impeded flow throughout the space. As a second home, Baumann wanted a more open floorplan that was entertaining-friendly for her fiancé and their extended families who enjoy coming to the Lake Waubesa residence on weekends.

“It needed to be a more useful space for a large number of people,” says Langreck. “They use the home for a lot of weekend water play. They’re also big [University of Wisconsin-Madison] Badger fans, so they love celebrating games together, either at the home before and after attending a game, or watching it together on TV.”

To accomplish that goal, the designer removed several walls, ultimately stealing some space from the master bedroom, which she then reconfigured along with the master bathroom and closet. Consideration was also given to natural light since the previous kitchen lacked windows.

One of the most useful transformations is the pantry alcove, which takes center stage behind glass pocket doors. It showcases black-framed steel doors and soapstone countertop that contrast against the white subway tile backsplash, floating shelves and cabinets. Accents of quartersawn oak drawers further boost its focal-point status. Equipped with a prep sink/faucet and outlets to power small appliances, Langreck’s client uses the alcove as a serving station for parties as well as for everyday storage.

“There were significant changes made and we had a lot of discussion about goals,” she says.

One of the most useful transformations, and one of her client’s favorite additions, is the pantry alcove, which takes center stage behind glass pocket doors.

“Since we had limited wall cabinets, due in part to the addition of a couple of tall windows that frame the [Wolf] cooktop, we needed to find extra storage,” she says. “Lisa also wanted something fun for her kitchen, so we created this special space from a couple of inspiration photos she shared.”

The end result showcases black-framed steel doors and a soapstone countertop that contrast against the white subway tile backsplash, floating shelves and Dura Supreme Cabinetry cabinets, which are color matched to Benjamin Moore’s Simply White. Accents of quartersawn oak drawers further boost its focal-point status. Equipped with a Kohler prep sink/faucet and outlets to power small appliances, Baumann uses the alcove as a serving station for parties as well as for everyday storage.

Recessing the pantry created space to more freely move around the adjacent oversized 126″x53″ island, which provides plentiful seating for six along with a view to the lake. The island is also home to a Kohler sink and faucet and paneled Miele dishwasher, which matches the paneled Sub-Zero refrigerator and U-Line wine storage unit. A Wolf microwave and double oven round out the appliances.

Although situated in the same location as the original island, Langreck revamped its previous two-level design, which included a 48″ raised bar.

“Its height disconnected the space and visually cut the room in half, making the kitchen actually feel smaller,” she says. “Leveling it off to a uniform height makes the room feel larger and facilitates conversation with guests.”

Baumann originally selected porcelain as the island’s top, but based on several factors, including its oversized dimensions, a cutout for the sink and the overhang for seating, Langreck’s fabricator suggested changing course.

“Porcelain just wasn’t the right material for this particular application,” she says, “so we searched out alternatives, which we had to do quickly since the cabinets were already set.”

“She still wanted a light-colored material for the island, but we did need to rethink the aesthetic a bit,” says the designer. “Sometimes the path to completion while remodeling isn’t always straight!”

Langreck was also challenged to improve the aesthetics of the corner pantry, which her client viewed as a necessary evil given its ability to corral a large amount of food, especially snacks, consumed for game-day weekends.

“Lisa didn’t necessarily like the looks of the corner pantry, but she was hesitant to lose it since she needed the storage,” she says. “To help make it disappear visually, we painted the door, as well as the trim, white. Adding crown moulding connects it to the adjacent cabinetry. We also used hidden hinges and added a handle that coordinated with the cabinets so it wouldn’t look so much like a door.” ▪

Kitchen designer teams up with her interior designer client to create a more open and entertaining-friendly kitchen suitable for all members of the family, including pets.