Recovery in the Air as 2009 Comes to Close 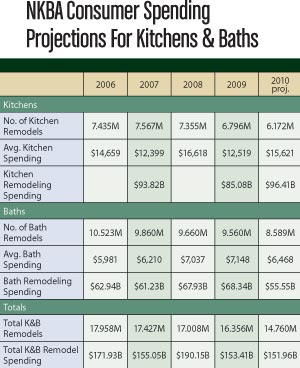 While the NKBA is pointing to early signs of a recovery - based on a third-quarter 2009 pickup in showroom traffic and kitchen/bath prices among dealer-members (see related Consumer Buying Trends, "NKBA Survey Finds Uptick in Kitchen and Bath Showroom Visits") - the association's latest projection for 2010 consumer spending is less optimistic. As illustrated above, total spending for kitchen and bath remodeling is projected to total nearly $152 billion in 2001, down from the past several years. Projections by the Hackettstown, NJ-based NKBA are based on a survey of 4,000 consumers polled last August. 2010 forecasts were determined by asking consumers whether they plan to remodel their kitchens or baths in 2010 and how much they plan to spend on those remodels. Those response rates were then compared to previous years' consumer planning vs. actual remodeling activity, and adjusted to reflect past history.

Signs of a modest recovery for housing and the U.S. economy continued to resonate throughout the kitchen and bath industry as 2009 wound to a close. Among the statistics and forecasts released by government agencies, research firms and industry-related trade associations in recent weeks were the following:

HOUSING STARTS
Signs continue to indicate that the nation is on the road to a housing recovery, although any recovery is likely to be slow and prolonged, according to the National Association of Home Builders. Commenting on the latest figures for U.S. housing activity, the Washington, DC-based NAHB said last month that despite a recent uptick in housing production, poor job markets and other economic factors are still keeping many potential home buyers on the sidelines. “Home builders remain very cautious about starting new homes,” said NAHB Chief Economist David Crowe. “Understandably, it will take some time for the newly extended and expanded home buyer tax credit to start boosting sales in individual markets – just as it did the last time such an incentive was enacted.” Housing starts, which descended to historic lows in 2009, are expected to post a modest increase this year, rising to 695,000 in 2010.

RESIDENTIAL REMODELING
Billings at residential architecture firms remain weak, but remodeling activity is showing an improvement, according to results from the American Institute of Architects “Home Design Trends” Survey for the third quarter of 2009, conducted among a panel of 500 architecture firms that concentrate on the residential sector. The Washington, DC-based AIA said last month that the residential market “continues to struggle,” although inquiries were “encouraging” compared to the first quarter of the year. “There is an extremely high level of inventories of unsold homes due to the prolonged downturn in the housing market,” said AIA Chief Economist Kermit Baker. “That and the fact that home energy and transportation costs have risen has people rethinking living options.”

CABINET & VANITY SALES
Sales of kitchen cabinets and bathroom vanities declined again in November of 2009 compared to the same month a year earlier, the Kitchen Cabinet Manufacturers Association said last month. According to the Reston, VA-based KCMA, manufacturers participating in the association’s monthly “Trend of Business” survey reported that overall cabinet sales fell 15.4% in November, compared to November of 2008. Sales of stock cabinets declined 13.5% while semi-custom sales fell 17.6% and custom cabinet sales dropped 14.0%, the KCMA reported. Year-to-date sales through the first 11 months of 2009 were down 29.2% compared to the January-November period of 2008, the KCMA added.

APPLIANCE SHIPMENTS
The stabilizing of the housing market, improving picture on lending, slowing increases in unemployment and general consumer outlook “favor the U.S. appliance business,” a major business research firm said last month. According to the Port Washington, NY-based NPD Group, manufacturers “seem to be holding back a little on new product introductions to better leverage the demand as it improves.” More than 50% of major appliance sales in November 2009 were “replacement” in nature. “This may show some sign of pent-up demand, as well as cautious optimism on the horizon,” NPD researchers said.

Their comments came in reaction to reports that existing-home sales rose again in November 2009, as first-time buyers rushed to close sales before the original Nov. 30 deadline for the recently extended and expanded tax credit, according to the National Association of Realtors.

Resales remain at the highest level since February 2007, said the Washington, DC-based NAR, noting that the November ’09 increase was expected.

“This clearly was a rush of first-time buyers not wanting to miss out on the tax credit, but there are many more potential buyers who can enter the market in the months ahead,” said NAR Chief Economist Lawrence Yun. “We expect a temporary sales drop while buying activity ramps up for another surge in the spring, when buyers take advantage of the expanded tax credit, which hopefully will take us into a self-sustaining market in the second half of 2010.”
In all, said Yun, 4.4 million households are expected to claim the tax credit before it expires on April 30, with buyers – many of them first-timers – taking advantage of record-low mortgage rates, deeply discounted prices and federal incentives.