Remodeler of the Month 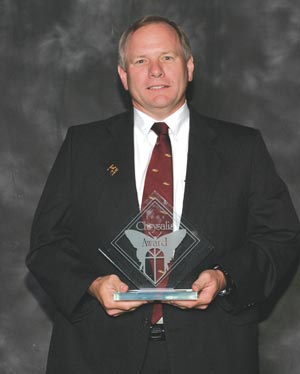 Last month David Crane, CGR, organized a group of nine builders and remodelers to supervise and assist with a weeklong rebuilding project along a portion of the Mississippi Gulf Coast hit hard by Hurricane Katrina. After months of planning and preparation, the group from Middle Tennessee blitzed and rebuilt eight homes in and around the town of Gulfport, Miss. Most of the homes had been gutted. They also needed new roofs, and lots of interior carpentry.

To get this project going, Crane first drummed up volunteers by presenting his project to six local remodeling groups around Nashville. Then in early May, he and a core group did a scouting trip to the affected area to pick out the projects they would complete. This effort followed closely on the heels of a massive donation effort Crane organized immediately after the hurricane struck. He helped fund and organize the donation of three trailers and one 26-ft. truck full of rebuilding supplies.

“This is an area that is close to my heart,” says Crane. “I grew up in New Orleans and most of my family still lives in the area.”

In fact, Crane might still be living and working in the New Orleans area, had it not been for a getaway weekend he and his wife took to Middle Tennessee. During that weekend, they fell in love with the area and decided in 1987 that they would start a new company there. Until that time, David had been a partner with his brother James J. “Jimmy” Crane in Crane Builders, Inc. of New Orleans, a company his brother still operates today.

The honor also recognizes significant achievements in business excellence. Crane Builders, LLC typically generates between $3 million and $4 million annually. It has 10 employees, including David and four lead carpenters. The typical company project, says Crane, involves an addition of some type. They specialize in whole-house remodels, kitchens and baths. The average project size is over $100,000 and they won’t go below $50,000 except for past clients who need additional work. To Crane, a longtime participant in Business Networks peer group, the company’s success comes down to “a culture of superior customer service” and solid business systems.

“We have grown significantly in the last few years, both in volume and more importantly in systems. The results are very positive on several fronts. The employees feel empowered to make the tough decisions without upper management interfering,” Crane explains. “It also allows me to limit my hours, take more vacation time and participate in more activities with my wife and two daughters, and dedicate even more time to giving back to the industry and community.”