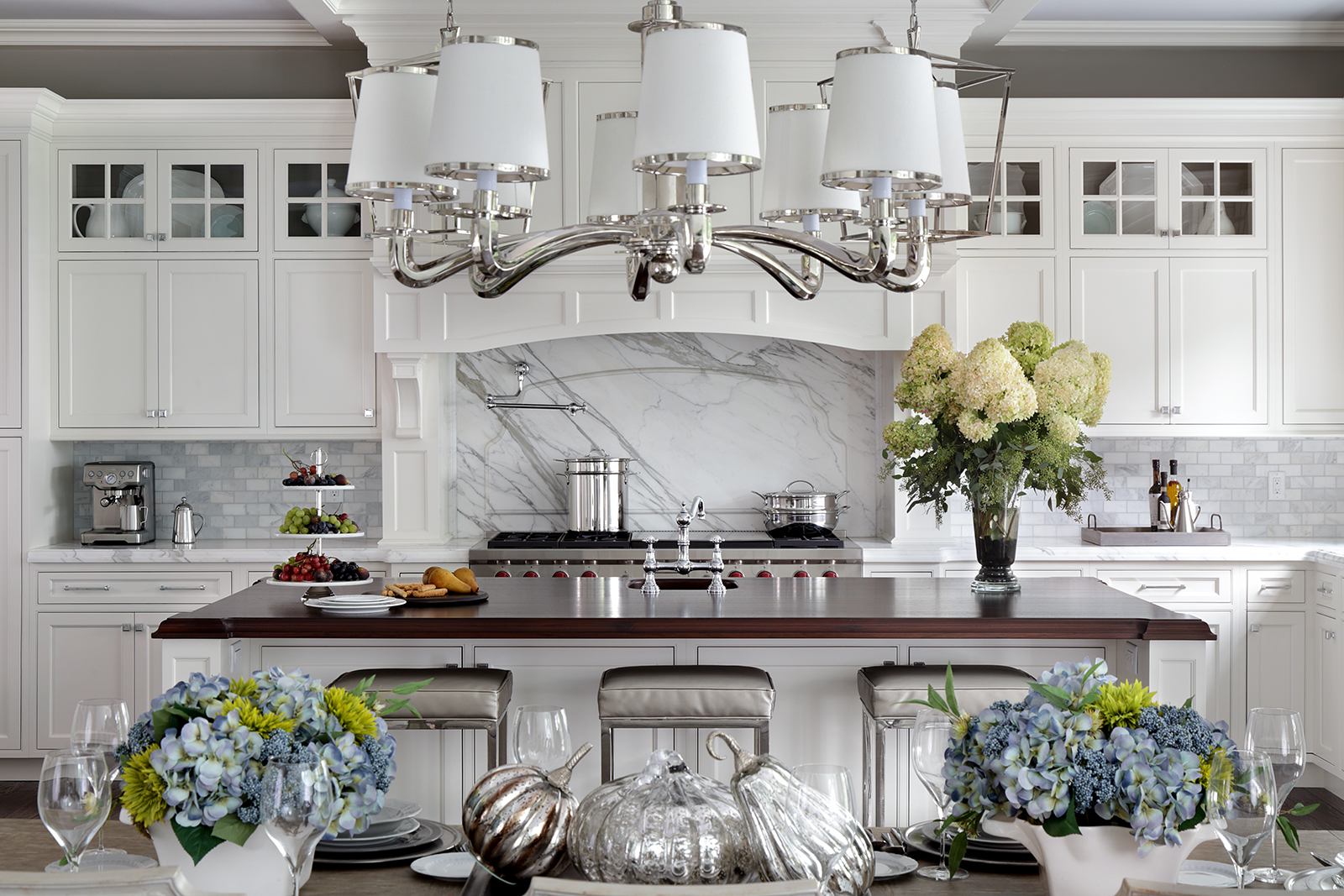 This Saddle River, NJ mansion was designed as a dream house for a potential buyer. ‘The Best of Everything’ was on the design wish list, including two Sub-Zero refrigerators and a full-size wine fridge.

PARAMUS, NJ — It is not too often that someone hired as a salesman gets the opportunity to take over an entire company after only six months on the job. However, that is exactly what happened to Amir Ilin, president of Paramus, NJ-based firm Küche+Cucina. When Ilin came to New York to pursue a sales position at the showroom, he had no idea that he would soon be running it.

“[The owners] decided that the company wasn’t making money and they didn’t want to continue,” says Ilin. “I was just here for six months and I said, ‘Listen, if you’re going to close the company, do you mind if I just continue?’ And they said, ‘Lovely, sure.’ And that’s basically the beginning – that’s how I started.”

Originally from Israel, Ilin moved to California in 1986 to attend college. He went to classes during the day and worked in the timeshare industry at night. In 1989, he got a job offer from Poltronova International, owned by IDI North Inc. in New York, a showroom that had just added a kitchen line to its furniture collection. It was at this point that he decided to take his chances and leave school.

“I kept switching majors – I wasn’t really sure what I wanted to do. Then I got an offer to move to New York for this company that was selling furniture and decided that I had nothing to lose. It was an adventure. So, I packed up my stuff, moved to New York and started working in this company,” recalls Ilin.

Six months later, Ilin started the process of taking over Poltronova and within the year was in charge, working alongside a kitchen and bath designer. Ilin handled operations and sales, and the designer worked with clients on project designs. The company was facing serious financial difficulties, so the first thing Ilin did was move the showroom from Long Island City, NY, to Paramus, NJ, where it was less expensive, and where there would be more foot traffic.

“The original showroom when I took over the company was in IDCNY – International Design Center New York,” explains Ilin. “It was a great concept, except it was in Long Island City and, in those days, Long Island City was not in and hip like today. Designers from New York City would refuse to go there. We had a beautiful, beautiful showroom that was designed by Vignelli. It was stunning, but nobody was coming in.”

When he first came from California, Ilin had rented an apartment from his relatives in Edgewater, NJ. He had gotten to know the area, so when he decided to move the showroom, he looked around and found a spot on Route 17 in Paramus that was a perfect fit.

Ilin worked 12- to 15-hour days, six days a week. He would have worked seven days if allowed, but Paramus has a “blue law” that bans the sale of clothing, shoes, furniture, home supplies and appliances on Sundays. He was doing everything from painting to changing light bulbs – whatever needed to be done.

Despite taking over a business with little experience, Ilin loved owning his own company and liked what he was doing. He says it was the little successes, such as a client purchasing from them or a satisfied customer, that kept him going. Ilin doubted himself many times, though – often on Fridays, when he needed to write checks. However, he kept on going no matter what.

“I didn’t have much of a business plan – it was a gut feeling. It was being young and courageous, and taking chances more than anything else. I figured I had nothing to lose,” he remarks.

Ilin’s hard work paid off. By 1995, the firm had started to grow, and the volume of sales became substantial. He added more staff and, in 2004, opened a satellite showroom in Madison, NJ.

Ilin even started a Küche+Cucina house cabinet line. He had gotten fed up with the inconsistent product and service quality from several local cabinet brands, so he decided to contract cabinets built to his own specifications for residential projects.

“It works out great because we don’t sell a [well-known] brand, so you don’t have to pay for the name. You get a better value and a better product. It’s a win-win,” he reports.

The business’ corporate name is still IDI North Inc., which was chosen by the original owners. However, a few years after Ilin took over, an advertising agency thought it would be a good idea to include the German and Italian words for kitchen – Küche and cucina, respectively – in an ad since the company sold both German and Italian kitchen furniture. The name caught on.

“I remember the first time that somebody called and said ‘Is this Küche Cucina?’ and the girl who answered the phone said, ‘No, wrong number’ and she hung up,” says Ilin.

The second and third time this happened, Ilin figured out that people were relating better to the name Küche Cucina, so they decided to stick with it and ended up legally filing a DBA (“Doing Business As”), designating the company as Küche+Cucina.

Over time, in addition to the company’s name change, Ilin’s role also evolved as a designer. With no prior design experience or training, Ilin’s domain had been sales. However, slowly over time he became more involved in the design process with clients, and they eventually started asking him directly for designs.

“It probably took about five to six years to get to that point where, all of a sudden, it was all of my ideas on this kitchen, and people said, ‘We want you to do the kitchen for us, we don’t want somebody else,’” he notes.

Since he did not have formal design training, Ilin built up a support team around him that would handle drawing the designs and ordering products, while he had face time with the clients, came up with the ideas and focused on the big picture.

His designs have grown in popularity, so much so that he is even called upon by developers to give input on kitchen design and room layout for multi-unit buildings before they are built.

“I guess I have a knack for it,” says Ilin. “Not to make a comparison, because I don’t think it’s fair, but it’s like a musician that doesn’t read notes – because I don’t do drawings.”

Küche+Cucina is truly an international firm. In addition to Ilin, who comes from Israel, members of the staff hail from Singapore, Italy and the U.S. They do projects all over the world, including a large multi-unit project done in Angola.

When discussing the opportunity for international projects, Ilin explains, “It doesn’t really matter where the job is. In this day and age, with emails and everything else, it’s so easy. Even before email, you just [got] on a plane and you [went] there.”

Another aspect of the firm’s business is as a wholesaler for an Italian cabinet company. Küche+Cucina is the exclusive distributor in the U.S. and Canada for Italian brand Pedini. Ilin says this is also a large part of the business, for which the company has expanded its network over the years.

When discussing the future of his firm, which celebrated its 30th anniversary this year, Ilin only sees more work on the horizon. The firm is in the midst of finishing the Toll Brothers’ Pierhouse at Brooklyn Bridge Park condo project, and has new projects coming in every day, including a 287-unit project in western New York.

“I’m always interested in talking to designers if somebody’s good. We have so much work that there’s room for more people here. But,” he stresses, “they have to be good.”