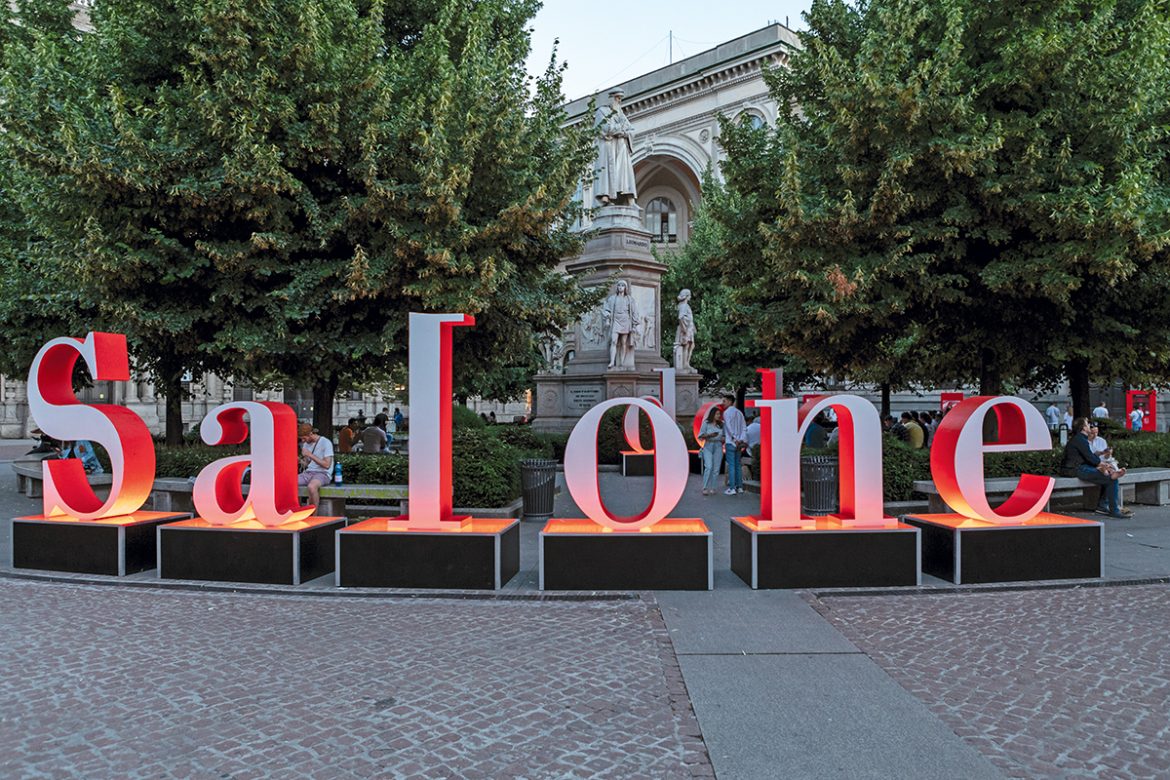 A walk through an art gallery or museum can leave the visitor awestruck, entranced by a sense of beauty, a fascination with what the eye is beholding. Attendees of Salone del Mobile.Milano in Milan, Italy experienced that same sense of wonder, treated to a feast of dazzling design for the home.

Held June 7 through 12 at Rho Fiera Milano, Salone – celebrating its 60th anniversary this year – nodded to its past, with a focus on quality and innovation, as well as embraced the future and its commitment to environmental and social responsibility.

Maria Porro, president of Salone del Mobile.Milano, noted, “Putting together this edition of the trade fair has been a powerfully emotional experience, given its extraordinary symbolic dimension: it is narrating 60 years of history and marking a new point of departure for our sector.”

Indeed, the crux of the massive exhibition centered on beautiful design that is meant for wellness and refuge – and achieving those goals with a dedication to sustainability.

Delayed for more than two years due to the COVID-19 pandemic, Salone’s return was a celebration of all things design. More than 2,175 exhibitors from around the world showcased their products, filling all 20 pavilions at the exhibition center. Attendance of over 262,000 confirmed the importance of the show and exceeded all expectations in terms of turnout.

In addition to the exhibit halls, Salone offered visitors a range of experiences. A program of presentations allowed speakers to share design ideas and stories with audiences, and a collaboration with Identita Golose Milano – the International Hub of Gastronomy – enabled visitors to experience the dishes of some of Italy’s greatest chefs and artisans.

SaloneSatellite, which is devoted to the future of design, features the work of more than 600 young designers. This 23rd edition, which had the theme “Designing for Our Future Selves,” promoted inclusive design, fostering autonomy, comfort, movement, usability, interaction and safety for all. New this year was a podcast that brought all of the voices of the participants together as an alternative for the sight-impaired for design without barriers.

Also prominently featured was an installation entitled “Design with Nature,” curated by architect Mario Cucinella to reflect an ecosystem that acts as a representation of a future way of life. Aware that, environmentally speaking, a radical change of approach is needed, the architect worked with Salone on the theme of transforming the ways in which people live on the earth and on the role that architects and designers play in the creation of future spaces. The exhibit investigated the ways that vegetable and animal waste, as well as raw materials used in construction, could be sourced, recycled and upcycled, and the fact that eco-friendly alternatives already exist and need to be encouraged.

Salone also spread beyond the fairgrounds and into the city of Milan with The Magic Box, a site-specific film installation that featured 11 short films by Italian filmmakers. And the design community was treated to a performance by the Philharmonic Orchestra, which performed Prague – Symphony No. 38 in D Major, K. 504 by Wolfgang Amadeus Mozart, followed by Apollo, choreographed by George Balanchine to music by Igor Stravinsky, starring Roberto Bolle.

The week was highlighted by a 60th anniversary event at Palazzo Dugnani, which featured decade-appointed rooms, live music and a celebratory atmosphere.

The 23rd edition of EuroCucina was a significant draw for this edition of Salone. The kitchens on display reflected areas meant for family and friends to share and spend time. The recent pandemic has made the space more meaningful, a place where families cook, eat, work and interact with children. Designs reflect this return to the kitchen’s roots, but with technological updates that make them more livable than ever, whatever their size.

At the same time, the eighth edition of FTK presented built-in technology and range hoods for the kitchen that advance function and ease of use. These electrical appliances boast connected technology for more intelligent operation and a more sustainable future, notes Salone.

Natural materials, wood and stone featured in concert with more industrial steel and glass pieces made for interesting contrast, as seen in Scavolini’s Jeometrica kitchen. J channel and C channel cabinets were also a popular item.

With appliances, there were refrigerators that can set themselves automatically as well as notify homeowners when products are expiring, and even ones that talk to ovens, identifying available ingredients stored and choosing recipes for those food items.

Elica’s LHOV presented a new category of appliances, a 3-in-1 solution that integrates cooktop, hood and oven. The filter system is concealed within the product, while the oven is at an ergonomic height. Downdrafts built into cooktops were shown at multiple booths, effective for smaller kitchens or where venting is an issue.

Signature Kitchen Suite showcased a convertible undercounter refrigerator with two drawers that can be regulated with a choice of six different temperatures as needed, independently of each other.

Appliances in all colors and surface materials were everywhere at EuroCucina. Samsung and Fulgor Milano delivered a fresh take on white appliances, while SMEG continued its pursuit of all things color.

Crowds surrounding the Cooking Surface Prime booth area were treated to a live demonstration by a chef cooking directly on a countertop. The company was presenting what it calls “the first invisible industry cooktop.”

Among the more dazzling pavilions were those that housed the International Bathroom Exhibition, which is also into its 8th edition. With 186 exhibitors, the area showcased everything from furniture and sinks to shower systems and faucets.

Energy efficiency was a key element here, with water savings top of mind for all manufacturers. Still, the experience – especially the rising interest in wellness – was the driving force behind products in this category.

Kohler, a new exhibitor at Salone, presented its Anthem shower systems, which can control up to six shower outlets, showerheads and sprays for types of jet, temperature and flow. The smart system can be controlled through the app, customizing the shower experience.

Dornbracht’s new rainfall showerheads deliver a natural shower experience, from a spring drizzle to a downpour, according to the company. The drops for the rainfall experience fall without pressure, delivering a relaxing experience, the firm adds. A more powerful flow for washing and rinsing is also featured. The showerheads also include voice-controlled integrated lighting.

Abaco from Ceadesign is a modular piece that includes all of the functions needed for the bathroom inside a single unit. The system, which incorporates the washing, bidet and water functions, is made of stainless steel, providing an antibacterial surface that is recyclable.

Beyond technology and efficiency, the beauty of the products – and the sheer number of them – made it difficult to organize them cohesively. Among the prevailing trends were: unusual arrangements for double sinks, the rise of orange as a trend-setting color, tubs of all shapes, showers that deliver wellness properties such as chromatherapy and aromatherapy, sculptural pedestals and sinks and pops of color everywhere.

Double sinks is a popular request for baths being used by two people, but smaller rooms can’t accommodate a large vanity with two fixtures, and vanities aren’t necessarily a desire for some. Several companies delivered clever alternatives for this dilemma, showcasing everything from distinctive vanity setups to stunning side-by-side sink solutions.

In keeping with the concept of wellness, the idea of a good, long soak in a luxurious tub is clearly a winner for designers and homeowners. Clawfoot tubs, sculptural tubs, sleek tubs, colorful tubs and embellished tubs were all on display, and then some.

Duravit presented its Zencha line, which is inspired by Japanese tea rituals. Designed by Sebastian Herkner, the line combines organically shaped above-counter basins and bathtubs with geometric, unadorned furniture. The softened square version of the freestanding tub is a take on the square Japanese onsen baths.

Cosentino showcased a number of new surfaces that can be used for everything from kitchen counters to wall cladding to shower surrounds.

Sinks were featured at every turn in the exhibit, but there were no ordinary biscuit-toned drop-ins in sight. Instead, designers were treated to shapely vessels, freeform basins and sculptural pedestals in every conceivable material and color.

Glass was a popular material, as showcased at Artinlinea and Glass Design, while porcelain, solid surface and ceramic continued their command. ▪

What Was Trending at KBIS Virtual

A Sampling of Hot Trends from Salone

A Look at the Hottest Trends from DCW