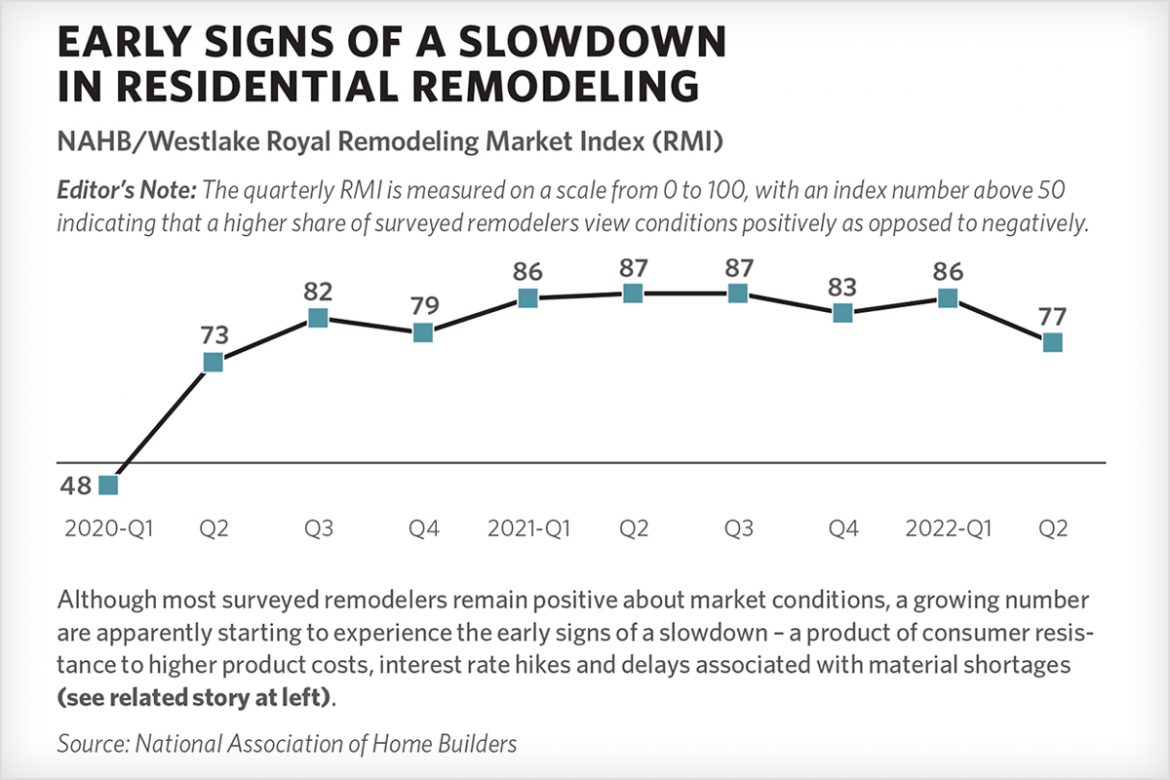 Rising interest rates, economic uncertainty and ongoing supply chain disruptions continue to serve as significant headwinds for the housing and residential remodeling markets as the fourth quarter of 2022 approaches. Among the key statistics and forecasts released in recent weeks by government agencies, research firms and industry-related trade associations were the following:

Rising interest rates, production bottlenecks and building material supply chain disruptions continue to put a damper on the single-family housing market, according to the National Association of Home Builders. The Washington, DC-based NAHB reported last month that single-family starts are retreating on higher construction costs and interest rates, a decline that’s reflected in surveys that have witnessed a drop in builder sentiment. According to NAHB Chief Economist Robert Dietz, price growth will slow this year, “but a housing deficit relative to demographic need will persist.” New home sales on a year-to-date basis are down 10.6% thus far in 2022.

Existing-home sales have essentially returned to levels experienced prior to the COVID-19 pandemic, after two years of “gangbuster performance,” the chief economist for the National Association of Realtors said this summer. According to Lawrence Yun of the Washington, DC-based NAR, further sales declines should be expected in the upcoming months, given housing affordability challenges stemming in part from the sharp rise in mortgage rates. “The housing market is clearly undergoing a transition,” said Yun. “Nonetheless,” he added, “homes priced appropriately are selling quickly and inventory levels still need to rise substantially to cool home price appreciation and provide more options for home buyers.” Total existing-home sales were pegged at a seasonally adjusted annual rate of 5.12 million, according to the latest available figures.

Expectations for continued remodeling demand are being tempered as homeowners reportedly await signs of national economic stability, according to the latest in a series of quarterly reports by Houzz, the Palo Alto, CA-based platform for home remodeling and design. “Following the strong residential remodeling and design activity of the past two years, it’s unsurprising that businesses are leveling their expectations as current economic conditions now impact both sides of the industry,” said Marine Sargsyan, staff economist for Houzz. The Q3 2022 Houzz Renovation Barometer found that the majority of businesses across both the construction and architectural and design services sectors reported more increases than decreases in recent business activity. At the same time, following record-high wait times before professionals can begin work on a new midsize project, businesses reported that backlogs are decreasing across the industry, Houzz said.

With supply chain delays, inflation and other market headwinds taking a toll, domestic shipments of major home appliances posted continued 2022 declines, dipping for the second consecutive quarter and falling below shipments during the same six-month period a year ago, the Association of Home Appliance Manufacturers reported. According to the Washington, DC-based AHAM, major appliance shipments totaled 43.68 million units during the first six months of 2022, down 4.9% from the 45.95 million units that shipped during the first half of 2021. First-half declines were posted in all key product categories, including cooking (-4.1%), home laundry equipment (-8.7%), food preservation (-1.2%), and kitchen cleanup (-2.0%), AHAM reported.

CAMBRIDGE, MA — After a record-shattering year in 2021, the nation’s housing market “is at an inflection point,” with higher interest rates, inflation and record-high home prices “having taken some heat out of the homebuying market,” a major new report concludes.

But despite “the chilling effect” of high costs and rising interest rates, the near-term outlook for housing demand remains “largely positive,” according to The State of the Nation’s Housing, an annual report conducted by the Harvard Joint Center for Housing Studies.

The Joint Center report notes that housing costs continue to rise across most major housing markets, while the recent surge in the prices of gas, food and other necessities “has made matters worse.”

Over the long term, housing demand is set to decline dramatically, with population growth, the primary driver of household growth, now at a 100-year low as birth rates have fallen, death rates have risen, and immigration has slowed to a trickle, Harvard researchers said.