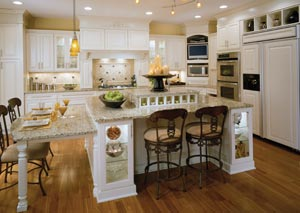 Each design stood out because of its creativity, functionality, presentation and overall design, according to Holiday Kitchens, the contest’s sole sponsor.

“We decided to run a contest, [now in its second year], to help us find out where all of these great kitchens were in the field. We wanted to see the fantastic projects out there. That was our main goal,” explains Tamy K. Severude, sales manager, Holiday Kitchens in Rice Lake, WI.

The outstanding kitchen projects completed between January 2004 and September 2005 by designers using Holiday Kitchens’ products were recognized this year during K/BIS in a special ceremony, notes Severude.

The independent judging panel of industry professionals gave out awards in two categories: Framed Collection (FC) and International Design Collection (Full Access). Each category had a first- and second-place winner, plus a first-place winner from among those entrants who were also SEN members.

The winning kitchens were further featured in a special “Winners” Holiday Kitchens brochure, as well as in Signature Kitchens & Baths magazine this summer. The first-place winner in the International Design Collection (IDC) category – Jim Deen of Kitchen Kraft, Inc. in Columbus, OH – also received free photography of his winning kitchen as part of the prize. Deen’s design was dubbed the grand-prize winner. In addition, he received expenses for three nights during K/BIS for two people.

For Deen, who took first place in the IDC category, the biggest challenge “was the utilization of space versus function. We wanted a decorative hood surround, but there were windows and a pantry that made it impossible. So we decided to take out the pantry and eliminate all of the windows. In doing so we were able to fit an 8′ wood hood on the wall that centers with the plasma TV in the Great room.”

That allowed Deen to design a 12’Lx6-1/2’D, multi-level island that solved the dilemma of having no room for a table. It also allowed him to pack the kitchen with plenty of function, such as a large double oven and side-by-side refrigerator/freezer.

He covered the refrigerator/freezer in panels that matched the rest of the maple cabinets, which featured a Riverside door style and an antique white finish.

“A five-piece crown molding lends drama to the space, which has 9′ ceilings,” adds Deen. He finished the space with 24 different lighting sources “to set the ambiance.”

Meloy – who took first place in the IDC category among the SEN contestants – had to make “a couple of major and minor structural changes” to make this kitchen work, but he was able to reconfigure the work spaces, and open the kitchen with his design. He then installed a Lancaster Square door style in character cherry, finished in Sunrise with a Toffee glaze. That became the hinge on which the kitchen’s aesthetic turned.

“This kitchen achieves a warm, rustic, but refined look that functions well, and [is] a great gathering spot when entertaining,” remarks Meloy. “Character cherry cabinets fit the client and the eclectic household theme.”

Finishing off the IDC category, Kissing used a Lancaster Square door style in maple throughout the kitchen to create the design that placed second. It features a cooktop flanked by two large windows and topped with a hood in the same Ivory finish seen on the perimeter cabinets. A contrasting Ebony finish adorns the large, curved island.

Kissing created a focal point for her client that punctuates the kitchen design that garnered her first-place honors in the FC category. “It – the hood – is immediately obvious in this kitchen, and is both a visual and functional focal point,” explains Kissing. “The homeowner enjoys cooking with her friends surrounding her, and the 48″ GE Monogram professional-style range she chose requires significant ventilation.”

The hood, which was tailored by Holiday Kitchens to the specified dimensions, was adorned with carved Enkeboll moldings that wrap around the entire hood. It matches the maple cabinets that showcase a Riverside door style, finished in Sandalwood with a Mocha glaze.

Among the SEN contestants, Edwards snagged first place for her design that revamped the flow and function of a kitchen she had refurbished with new countertops and backsplash tile four years ago – at the clients’ request.

“They came back to us later and were still unhappy with the arrangement of the kitchen, and asked us back to redesign the space with a better flow and make it more open to the den. They wanted to open up the fireplace to the space, too, and they wanted newer appliances and cabinets, plus a new wet bar area,” recalls Edwards.

She was more than happy to oblige, and started by relocating the door from the kitchen to the “bonus” room. She then took out the wall that separated the basement and the entry to existing breakfast area. This made the bonus room more private while it opened the entry. It also allowed more space for the new kitchen, where she removed the desk area, opened the wall between the kitchen and den, installed a wet bar and relocated the refrigerator.

She installed maple cabinets in a Newcastle door style throughout the new space, finishing some in Parchment and others in Ebony. Two complementary granites – one for the island and one for the perimeter – complete the look.

Lastly, Ellis, who captured second place in the same category, created a space that now extends into the adjacent living space. It does so through the installation of an additional glass-fronted display unit located under a structural beam and a new “eating” bar.

She used alder wood cabinets in a Georgian door style and finished them in Butternut with a Mocha glaze to tie the space to the rest of the town house.