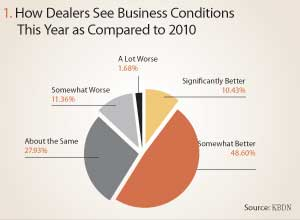 While business conditions in the kitchen and bath market have run the gamut from challenging to downright awful over the past few years, things finally seem to be looking up – at least a little.

Although no one seems to be projecting huge increases, kitchen and bath dealers do seem to be seeing greater traffic in their showrooms, with the majority expecting to be doing more kitchen and bath projects in 2011 as compared to 2010. Additionally, some dealers are already seeing significant improvements in business conditions, with the majority expecting to see continued improvement in the latter part of 2011 and beyond.

These were the findings of a recent survey that looked at dealers’ market outlook on the kitchen and bath industry, as well as business conditions and projections for future growth over the next few years. The survey, which polled more than 400 kitchen and bath dealers from across the U.S. and Canada, suggested a sense of cautious optimism, as many dealers expressed the sentiment that things are finally on the upswing in the kitchen and bath industry. The feeling seems to be that consumers are once again beginning to loosen the purse strings and invest in their homes.

But while survey respondents expressed positive feelings about the future, many still expressed concerns about the ability to close sales, or compete on profit margins. Equally important, the survey shows consumers spending less money on projects than in years past, while looking for more “bang for the buck.”

Ultimately, market conditions remain the driving force in the changes in the kitchen and bath industry, and the good news is that conditions do seem to be showing some modest improvement. In fact, when asked to rate business conditions in the kitchen and bath industry as compared to conditions in 2010, nearly 60% rated 2011 as “significantly better” or “somewhat better” than 2010 (see Graph 1). Roughly a quarter of those polled (27.93%) rated business conditions as “about the same as last year,“ while only 11.36% rated them as “somewhat worse” and a mere 1.68% rated them as “a lot worse” than last year.

While kitchen and bath dealers have been talking about increased showroom traffic for a while now, up until recently there was some question about whether the added traffic was actually translating into sales. Most dealers agree that closing a sale takes a lot longer than it used to, as consumers do more price shopping, and take more time to come to a decision. Additionally, 2010 saw many consumers hiring design professionals for smaller jobs (countertop replacements, appliance upgrades, hardware or faucet and fitting change outs), rather than complete kitchen or bath remodeling projects.

Another obvious result of the recession has been the shift from new construction to remodeling, with many dealers either abandoning the new construction business entirely, or focusing a smaller percentage of their efforts on this market. In fact, of those polled, more than 80% said less than 20% of their business comes from new construction – clear proof that the new home market isn’t coming back as quickly as hoped for (see Graph 10).

Although there are many signs that business is coming back – slowly but surely – there’s no question that it’s far more competitive out there than in years past, and dealers are increasingly looking for new tools to help them survive, and thrive, moving forward. Most dealers agree that growing a kitchen or bath firm is a multifaceted process that relies on strong partnerships, and they need support not only from customers, but from suppliers as well.
To that end, kitchen and bath dealers surveyed noted a number of areas where they rely on suppliers to help them continue to grow.

Chief among these was help with advertising and marketing issues, which more than 22% of those polled saw as one of their top three needs from suppliers (see Graph 11). Help with sales issues was cited by 20.78% of those surveyed as a top need, while help with profit issues and help to do a better job generating sales leads were each mentioned by nearly a fifth (19.29% and 19.12% respectively) of surveyed dealers as on their top three list of things they’d like from their suppliers.

Less frequently cited were help with business issues (8.06%), help with social media (6.98%) and help in networking with other kitchen and bath dealers (3.74%).