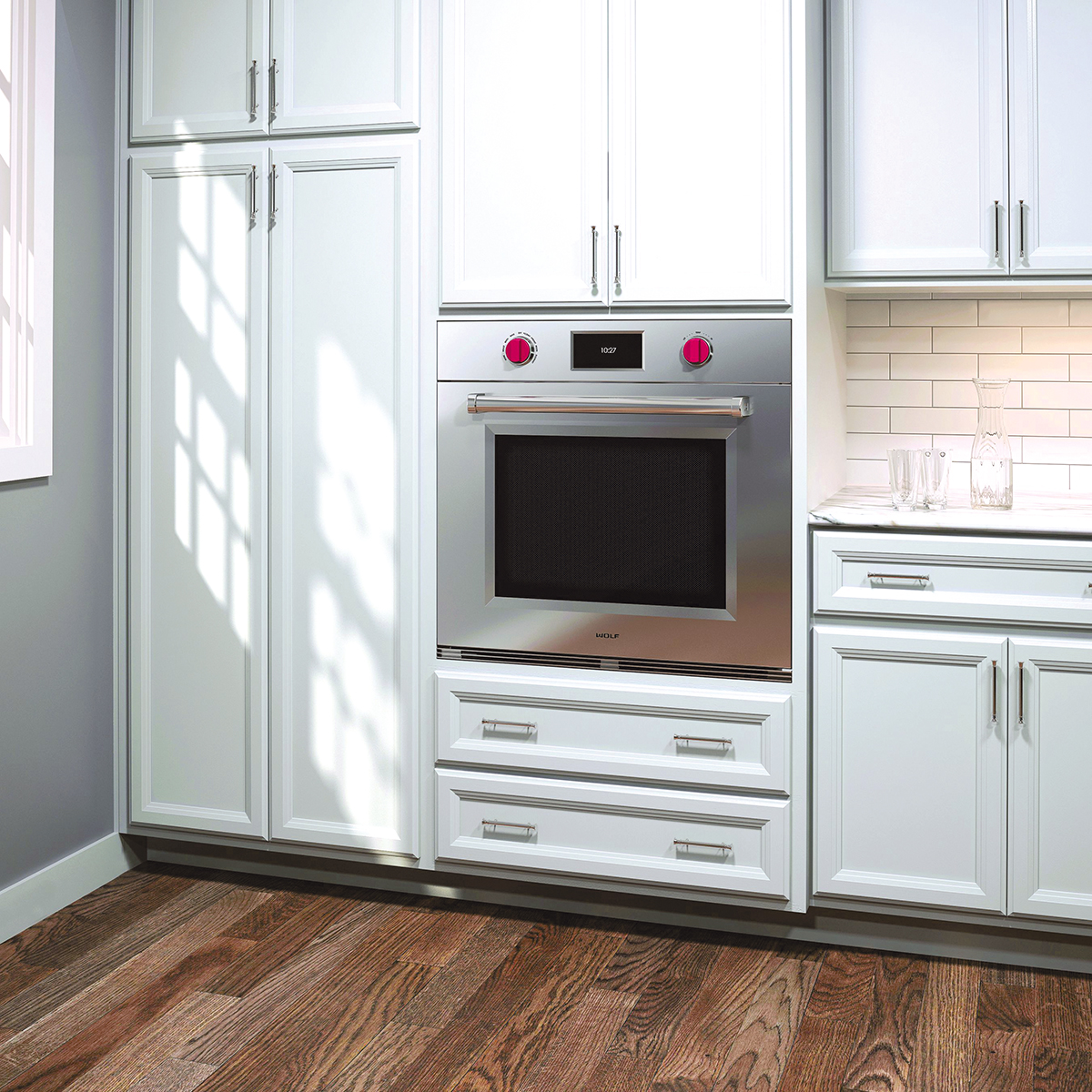 The M series line of built-in ovens from Wolf sync with home automated control systems and can be monitored via smartphones.

It wasn’t so very long ago that mobile phones were just for staying connected with family and friends. But today’s definition of “connectivity” has expanded dramatically, with the newest apps allowing homeowners to use their mobiles devices to stay in touch with their appliances from just about anywhere. And that’s not all they can do; the latest appliances can connect with each other, communicate with the company that made them, connect online to a vast library of cooking resources or even let users see the contents of the refrigerator while shopping at the grocery store.

And that’s not even getting into countertops that charge cell phones wirelessly, ovens that text their owner when the food is done or refrigerators that let the homeowner know when their kids left the door ajar.

“The connected home is not only becoming more in reach, it’s more the norm,” notes Brian Bugler, marketing manager of the Milford, MA-based Clarke showroom. “We’re seeing a trend toward appliances being able to be controlled by a central platform, as well as talk to each other,” he states.

There’s also an expectation for a constant influx of new and improved technology, according to Jeff Rexinger, sales manager at Artisan Kitchens, in Buffalo, NY. “I think that, because of the revolution of the technology we have in the palm of our hands with our phones, the appliance manufacturers are compelled to have technology in the product. It’s almost like it’s an expectation,” he states.

“In general, all of the appliance manufacturers are going toward more smart technology,” agrees Joe LaBoon, sales for the Buford, GA-based Georgia Kitchens.

Cooking appliances seem to be where the greatest technological advances are taking place, according to Pete Hampton, v.p. of the Peoria, IL-based Hampton’s Kitchens & Appliances. “Most of the connectivity we’re seeing in appliances right now is in ranges and wall ovens, where you have essentially a smartphone as your control panel, and use different apps and music services, all from the range,” he notes.

TECHNO CAPABILITIES
While technology has always been a big part of the appliance picture, there now seems to be a greater focus on how it improves the consumer experience, rather than being about adding cool new bells and whistles.

Convenience is king, dealers and designers agree, which means the best technology is the kind that consumers can easily see the value of. For instance, a new refrigerator, the Family Hub from Samsung, available later this spring, has cameras inside that can be accessed through a cell phone app. “So, if you’re out grocery shopping and you realize you left your list at home, you can literally look inside your fridge from your cell phone and see if you need to buy more milk,” LaBoon explains. This is the kind of practical benefit that’s easy to explain to homeowners, rather than being technology for technology’s sake.

Rexinger agrees that time savings is one of the benefits of the new technology. “We’re starting to get some traction on the wall ovens that communicate with your cell phone. There are several manufacturers doing this,” he remarks. For instance, GE Monogram has a single oven as well as a double oven that have apps that allow homeowners to set the temperature while they are out. “So, if you’re at the grocery store and you see a beautiful chicken you want to cook for dinner, you can grab your phone, go to the GE app, turn on your oven and set it to 350 degrees on convection. Now, you’re not wasting time when you get home waiting for it to pre-heat,” Rexinger explains.

Hampton agrees that the convenience factor is appealing to many consumers. “People like turning their appliances on and off from their cell phone, preheating remotely, being able to have the oven text their phone when their dinner reaches a certain temperature – that sort of thing. They like that they
can be a little more free and not to be tied to the range when they’re cooking.”

Bugler also sees consumers showing interest in products that help them to cook better. He cites the M Series oven by Wolf, “which has 200+ preprogrammed recipes so that users can just select what they want and it will tell them what to do, what rack position to use, and they are good to go.”

Rexinger adds, “We typically are saying to the consumer, ‘if you’re a great cook, [buying a cooking appliance with this type of technology] will make you a spectacular cook. And if you’re not so good, it will make you a great cook, because there is so much preprogrammed into the appliance, with recipes that select time and temperature, and varying temperatures as the cooking takes place.’”

Appliances are also connecting with each other. As an example, Rexinger notes, “Miele just introduced a line of cooktops and hoods that communicate with each other. Once the cooktop gets up to a particular heat level, it will communicate that to the range hood, which will turn on automatically and exhaust out the vapor or steam or odor produced from the cooking that’s taking place.”

SO WHO’S BUYING?
While the new “smart” technology is adding a wealth of functional enhancements to the latest kitchen appliances, there’s still some question about who’s actually buying these units.

LaBoon admits that younger consumers are the ones most drawn to the new technology, as most have grown up with it and have a tremendous comfort level with smartphone apps and Wi-Fi.

For many older consumers, the technology isn’t quite as appealing. “Older customers just see it as another thing that’s going to break,” LaBoon explains. Even the LED touch screens on the wall ovens can be a turn off for some of these homeowners, who are more comfortable with traditional controls that are viewed as less likely to need repairs down the road.

Hampton agrees that clients on the older end of the spectrum are slower to embrace the trend toward connectivity. “There are still quite a few who are hesitant to jump into the technology that is featured on their oven [because they’re] still not certain what value they’re going to get out of it,” he notes.

Paradoxically, he says, the ones the technology most appeals to – the Millennials – often don’t have the budget for it, especially if they’re working on a starter home or doing their first remodel. “With the new ‘connected’ appliances, it can become a problem of who can afford the technology. The Millennials are more apt to purchase it, but may not have the money.”

Rexinger agrees on the budget issue: “[This technology] actually skews to an older consumer because the cost of the appliance isn’t typically in the range of the younger ones.” However, he doesn’t see the baby boomers being resistant to the newest connected appliances. That’s, in part, because of the overwhelming popularity of – and comfort level with – mobile devices, where consumers of all ages are used to multi-tasking from their cell phones. “[Older consumers are] embracing it; now that they have it in the palm of their hand and they see how well it performs, it’s very well accepted [among all age groups].”

But LaBoon believes that, ultimately, “The newer generation is going to lay claim to this.” Particularly with regard to technology that assists with cooking, he believes, “the older generation of consumers have already perfected their [cooking] art, so they don’t want anything to change.” Young, time-pressed homeowners who may not have a lifetime of recipes under their belt may be more apt to embrace technology that simplifies the details of the cooking experience.

SELF-DIAGNOSING APPLIANCES
A few years back, a lot of the hottest appliance technology revolved around self-diagnostic capabilities. And some appliances still offer this.

Matt Wolf, contract sales and operations for the Charlotte, NC-based DCI notes, “For several years, Miele has had [appliances] with a Wi-Fi router that plugs into the back that communicates with the firm when something is starting to go wrong. Miele will then contact you and dispatch a servicer.”

LaBoon also notes several brands that can diagnose themselves: “You can actually put your smartphone up to a plate on your refrigerator and it can tell you what the issue is.”

But, according to Bugler, this trend is on the wane. “Self-diagnosing appliances are not as popular as they once were,” he notes, explaining that, “nothing can replace a technician, and some of these newer systems are very complex.”

Hampton agrees: “The self-diagnosing appliances still exist, but I don’t think it’s being actively pushed. If it’s something obvious, like a compressor, [these capabilities can usually identify the problem], but a pin hole leak or something else may be harder to diagnose.”

And Rexinger says, “The self-diagnosing trend has dried up, it’s fading. The background and profile of someone who could be a service technician 20 years ago and today are entirely different things. Today it’s all about circuit boards, what board is running what portion of the product. As the technology advances, so, too, do the requirements to identify malfunctions.”

So what does the future look like for smart technology? While today’s trends are all about convenience, safety may be the next frontier – and one that’s already begun to gain traction.

When Viking’s new “Incogneeto” is mounted under a countertop, it allows homeowners to use a portable, trivet-like device to cook anywhere on the countertop using induction cooking technology, which means neither the countertop nor the device gets hot – adding safety and convenience.

Hampton notes that wireless charging of countertops “is also just starting to pick up now, and I think that is going to be very popular.” While wireless charging is certainly convenient, getting rid of the wires and plugs also enhances safety.

And Bugler says, “In the future, if the smoke alarm sounds, the newest generation of appliances may be able to disconnect themselves with an app that turns off anything plugged in. That would be a great safety feature. I hope to see that one day.”

He also suggests that the newest smart locks may one day be able to alert homeowners to a carbon monoxide leak before they enter their home – another potentially lifesaving technology.

Already, he cites light bulbs that can be connected to a Nest thermostat, so if the house goes on fire, “all of the lights in the house turn to red, and blink.” This not only could save the lives of those sleeping in the home by waking them up, it could also alert neighbors to call for help more quickly.