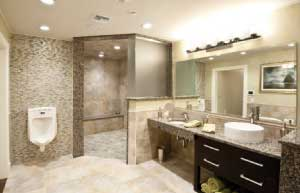 STATEN ISLAND, NY — Specialist Brendan Marrocco’s life changed when he entered the U.S. Army in 2008, and was deployed later that year to Iraq for a 12-month stint in support of Operation Iraqi Freedom.

It changed again on Easter Sunday, April 12, 2009, when the vehicle he was traveling in was hit by an Explosive Fired Projectile that killed one soldier, injured another and left Marrocco severely wounded with injuries that resulted in the loss of both arms and legs.

On June 11, 2011, his life changed once more when he was presented with keys to a new home in Staten Island, NY. Built entirely by donations, the handicap-accessible home is custom designed to fully accommodate his needs.

Anthony Codispoti, principal designer at IMC (Interior Motives Corp.) in Brooklyn, never gave a second thought about donating his design services to the project, which was proposed to him by John Ponti, owner of Metro Custom Installations (an audio/video installation company) and project manager for Marrocco’s home.

Once he heard about Brendan’s story and injuries, Codispoti knew he wanted to help, and his team – which consists of Vito Como, Michael Branca and Daniela Palumbo – was on board, as well.

“Brendan has a lot of mind power and will,” he says. “He’s a remarkable young man.”

Given Marrocco’s physical challenges, the home focuses on high-tech automation equipment. Energy-efficient Quoizel lights automatically turn on and off when he enters and leaves each room. Doors open automatically via an electronic key he carries with him. Custom upper cabinets in the kitchen by Elli NY Design Corp. lower and raise with AP Accessibility Professionals mechanisms, as do the range top and sink – all controlled via an iPad and specially designed stylus that can also control other functions such as dialing his cell phone. Radiant, in-floor heat provides efficient warmth. In the master bathroom, Kohler and TOTO faucets and bath fixtures turn water on and off automatically, and the shower is roomy enough to accommodate Marrocco and his wheelchair. An elevator moves him to his second-floor bedroom.

“The home is really state-of-the art,” says Codispoti. “It’s a ‘smart’ home, but it doesn’t look like one.

“It also features ADA-approved designs that look like your home or mine,” he continues. “That was one of his requests, to have a home that didn’t look institutional. He spent two years at Walter Reed [Army Medical Center] and he said that although he doesn’t have any limbs, he didn’t want to come into a home, or have his friends and family come into a home, that feels like a hospital.”

The open floor plan is designed with modern tranquility in mind. “It’s relaxing, yet masculine,” says Codispoti. “He is, after all, only 25.”

The design includes Corian and CaesarStone surfaces and ABK and LaFaenza tile flooring. “Brendan wanted hardwood floors, but we needed something that was more durable,” he says. “These tiles look like wood planks, but they’ll hold up longer and he won’t have to worry about maintaining them. Plus, the ceramic holds heat longer.”

A soundproof media room provides a space where he can listen to music or watch movies.

Other special spaces include a guest suite, and a bedroom and bathroom for Marrocco’s brother, Michael, who currently serves as his aide. A three-car garage suits his love of cars and his desire to get back into mechanics someday.

“There were hundreds of people and organizations who donated supplies and labor to build this incredible home,” he relates. Some of those include Hope for the Warriors, The Stephen Siller Children’s Foundation, Building Homes for Heroes, as well as IMC, Metro Custom Installations and various Staten Island and Brooklyn vendors.

“I had the privilege of wheeling him into his home at the unveiling,” he says. “He said he never expected to have a beautiful home. It has given him such a will to come home, to live his life. It’s given him a new outlook.

“I truly believe we have delivered a magnificent home for Brendan to live in,” he continues. “We have done this project with love, and when love is involved, great things happen.”