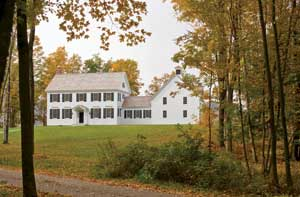 Manufactured custom products; the first two words in this term might seem like opposites at first, but in the custom home market it makes sense to those who believe it’s a better method of achieving the high quality their clients demand.

Mike Connor believes manufacturing certain elements of a custom home in a controlled environment rather than on-site is a better way of delivering quality. After 40 years of building homes, he’s certainly qualified to pass judgment on the process. At Connor Homes, detail work takes place in a factory environment to ensure a consistent level of quality. The term Connor uses to describe his process is mill-built architecture.

“There are efficiencies in building things in a factory, so why not apply those efficiencies to trim details in a custom home, not just framing? We produce consistent details, and we do it all the time. Ultimately, you can have high-end sophisticated architectural detailing at a cost just about anyone can afford. Frankly, I’m amazed more builders aren’t doing it this way,” Connor says.

As a general contractor out of college, Connor was interested in building homes but wasn’t sure where to begin. He connected with a panelized home manufacturer for guidance, and began constructing a line of homes. Connor soon became interested in historic houses so he launched his business 20 years ago.

Connor considers himself a designer and builder. However, he stopped on-site construction a few years ago and now contracts with other builders to handle that portion of the process. He believes the idea of hiring an architect in one town and a builder in another makes the process difficult and more expensive than it needs to be.

“Our method of home design and construction goes back to the way it used to be done in past centuries where architects and builders were the same people,” Connor says. “That’s how we look at it. We do it more efficiently.”

For a 2,500 sq. ft. home, efficiency means framing manufacturing takes about 3 to 4 days, while interior manufacturing takes another 3 to 4 days. “We build all of our own cabinetry in our facilities. Then all the pieces are loaded and shipped, which is orchestrated by software which determines the best way to stack and bundle the pieces for the most efficient unloading process on site,” Connor explains.

“On a typical 2,500 sq. ft. Colonial, a crew of four or five can have the home enclosed in about 10 days,” he continues. “Then comes installation of the exterior trim, windows, etc. What we do amounts to roughly one-third of a homeowner’s total costs for the project. Additional costs involve on-site work such as foundation costs, labor, mechanicals and things like that.” Move-in can be accomplished in roughly four to six months.

The Connor Homes design process can take clients down different paths. At the custom level, homeowners can approach Connor to handle everything from custom design to manufacturing and even on-site construction through one of Connor’s builder partners. The on-staff design team draws plans from scratch

“When someone hires us to design a house for them, it’s a heck of a bargain,” Connor says. “We see ourselves as an architectural design firm. We’re not selling plans to price around. Our contracts state the plan is for a one-time build, and the rights for the plans stay with us.

Sometimes Connor Homes works with outside architects and designers, including specialists such as kitchen designers. “They contact us because they may be doing a sophisticated design and need it accurately manufactured. They spend a lot of time drawing detailed architectural elements and, unfortunately, what is created in the field is not always what they drew. So they come to us to make sure details are made they way they’re drawn,” Connor explains.

When it comes to historical architecture, Connor Homes strives for accuracy pertaining to the original precepts of a particular style. “Our styles are historically accurate, but floor layouts, for example, are modern. Everything feels right with proportion and scale,” he adds.

“We think of ourselves as manufacturers, but really, we sell design. That said, we are a home manufacturer and as such we offer a line of houses that are already designed. We have one line called ‘simple classics.’ You can’t make changes to them; they are what they are. Some of our clients have seen plans in a catalog and they buy it, quick and simple. For the custom clients, however, we start off with a design retainer, have them sit with an architect and start designing, which can take from 3 to 6 weeks.

Quality is the Goal

Matt Laberge had worked with other panelized home manufacturers prior to partnering with Connor Homes, so he was comfortable with the process. Compared to other manufacturers, Connor Homes uses better quality materials, says Laberge, president, Laberge Building Co., Hinesburg, Vt.

“The quality of their product, their assembling, it’s above and beyond what I have done in the past. They’re not building a vinyl home; we’re trimming them out with real wood, and in some cases installing fiber cement siding. These homes are attractive buildings,” Laberge says.

As a preferred Connor Homes builder, Laberge contributes to the high quality level through on-site detail work. “Between the two of our businesses, we have quality in mind. This system might not work for every builder out there, but it certainly does for us,” he continues.

A systematic approach to custom home design and construction might not make sense to some, but Laberge believes there’s a call for it in the industry. “For the bulk of homes in the medium- to high-end market, I don’t know how you cannot consider this process. Still, there are some homes that are so high end I don’t know if you could panelize them,” he says.

As a builder of Connor Homes’ houses, Curt Benjamin, owner, Ben Curtis Inc. in Middlebury, Vt., finds the process of building panelized custom homes straight forward. “All the sections are clearly marked. They give you a plan and you take the floor joists, walls and roof rafters off the truck, match up the connection points, start spreading them around the site and erecting it,” he says.

“You have to be exact with measurements because these wall sections are already built and you can’t change them. On a stick-built home you could add another stud or trim where needed, but not with a premanufactured home,” Benjamin warns.

Framing goes up quickly, he adds, but the interior detail work progresses more slowly. Depending on the interior trim package, move-in could take anywhere from four to six months.

When questions arise on site, support is not far away. For example, Benjamin faced some challenges with dormers and trim the first time he built a Connor home. “Luckily since I operate near Connor Homes’ offices, they sent a guy down to help out. If I was in another state they’d be able to walk you through it on the phone,” he says.

Opinions on premanufacturing posted on Linkedin

To learn what designers and builders think of panelized custom homes, we turned to more than 700 members of the Residential Design & Build group on LinkedIn.com and asked: “Premanufactured custom home — oxymoron or good process?” Here’s what our members said:

William Horgan
I think that it is possible. I have seen some real progress in quality of the “stick framing” in this down economy. I have worked with some premanufactured wall system guys in the past. Some were “spot on,” some were not even close. It would all come down to who is keeping an eye on quality, just like any custom home.

Robert S. Farkas
I find it humorous that we accept only production-line cars, but our homes which are 10-times as costly have little production to them and the results always tend to be mixed because of it. I’ve set-up cabinet shops, moulding shops, and even veneer shops in past projects. That’s right, IN the unfinished shell, because even some shops have balked at the work because of difficulty but the homeowners loved it!
David Reisch
I think it is possible. However, I also think the quality has to be watched carefully in order to keep the construction up to a stick-built home.

Bonnie Pickartz
Well, since timber frames could be one of the oldest “premanufactured” custom homes, I’d have to say it can be applied to custom homes and is a good process.

Jeff Grenz
I recently built next door to a high-end (supposedly) factory-built vacation home. The factory-built was seven months from groundbreaking to final. While it took 13 or so modules to build, once assembled it was heated and powered up within days. However, the great room took four modules to get a room size that would travel down the freeway. Specification values were well below the neighborhood where the home prices started at $1.8 million in this market.