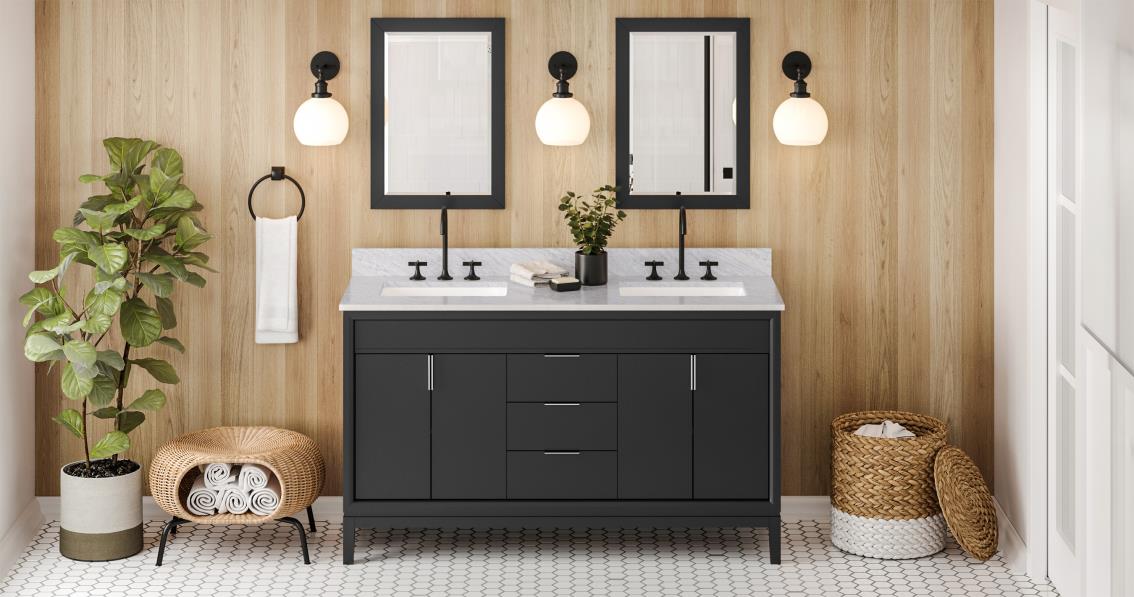 America’s love of bath spaces has grown exponentially as the country has grown. According to the US Census Survey of Construction (SOC), 64% of new, single-family homes started in 2019 had two bathrooms and 33% had three or more.  As homes have changed, so has the style and function of bath vanities.  Early vanities dating back to the Victorian era — when indoor plumbing became popular— were typically tables or dressers with two water taps, a basin, and a drain.  Although it would be several years before words like ‘style’ and ‘functionality’ would even become part of the lexicon in relation to bathrooms, today those terms are integral to bath design discussions.

As the number of baths in the home has increased, so has the need to make the space more functional based on its location.  For example, the bath located off the principal bedroom has grown larger because the area is typically used simultaneously by two people and is also often used as a dressing area.  Baths located off the entry might double as a mudroom where soiled clothing can be removed.  A bath near bedrooms might be a guest bath or a children’s bath depending on the family’s needs.  While the location of the bath can influence the decor, the functionality and durability of the vanity are also important to today’s homeowners, who studies show, increasingly opt for higher quality products and materials because they are designing spaces for the long term.

During the building boom of the 1950s, homeowners began to view the bath as an important space to incorporate style.  They also began seeing storage space as another valuable feature in the bath.  In some homes, baths with built-in closets were included in new home designs.  However, these spaces tended to be small and not well lit. Beyond built-in closets, there were two primary ways to make the most of bath space: custom cabinetry or furniture-style vanities.  Custom cabinetry provides the most flexibility for shelving, drawers, doors, and hardware, but these features come at a higher cost. Furniture-style vanities became more popular but had functional shortcomings.  Many styles with doors would offer space but no shelving.  Those featuring pull-out drawers weren’t ideal because they often lacked depth or width for larger items.  Vanities featuring an illusion of storage with false drawer fronts complete with decorative hardware became another sometimes frustrating trend.

During the early 1980s, new lighter-weight and lower-cost materials were introduced for furniture-style vanities.   However, not all the new materials were suitable for the bath environment.  Issues with vanities swelling and peeling were especially problematic in baths with poor ventilation.  At the dawn of the 21st century, it was clear that offering bath vanity options with style, functionality, and durability would be the wave of the future.

Made for a New Century

In the early 2000s, trends like working from home and homeschooling were beginning to change the way people utilized space in their homes.  The more time people spent living and working in their homes, the more bathrooms were used.  In addition to style and functionality, durability became part of the selection criteria for bath vanities.  However, there seemed to be a gap in the market between custom high-end and cookie-cutter low-end products made from inexpensive materials not designed to withstand the humid environments common in many baths.  Recognizing the opportunity to offer vanities that combined style, functionality, and durability at a mid-range price point, Jeffrey Alexander introduced its first vanities in 2005.

Jeffrey Alexander’s early vanities featured quality materials and craftsmanship in ornate styles popular at the time.  As the vanity line grew, Jeffrey Alexander saw an opportunity to differentiate from competitors by incorporating functional features and more storage options.  By leveraging innovations from the parent company, Hardware Resources, Jeffrey Alexander vanities began offering features like integrated soft-close drawer slides and soft-close door hinges that immediately distinguished the line from low-end competitors.  In addition to superior functionality, the engineers and product designers used their unique access to hundreds of decorative hardware options to select unique looks for each vanity style.  It is this commitment to developing new designs for a broad range of style tastes, as well as continuous improvements to functional features, that have made Jeffrey Alexander vanities synonymous with performance and style.

Today, Jeffrey Alexander is investing in the consumer personalization trend by offering over 4,000 possible combinations.  Using their design tools, designers can select the style, color, and size of the vanity as well as the bowl shape and top material.  It’s this ‘Power of Selection’ that will truly make Jeffrey Alexander vanities designers’ first choice for years to come.

Jeffrey Alexander vanity bases are pre-assembled, so set-up only requires attaching the vanity top and bowl.  Most orders ship within three days from a centrally located warehouse.  Dedicated customer support, the power of selection, exceptional craftsmanship, superior functionality and backed by a lifetime warranty means you can choose Jeffrey Alexander vanities with confidence.