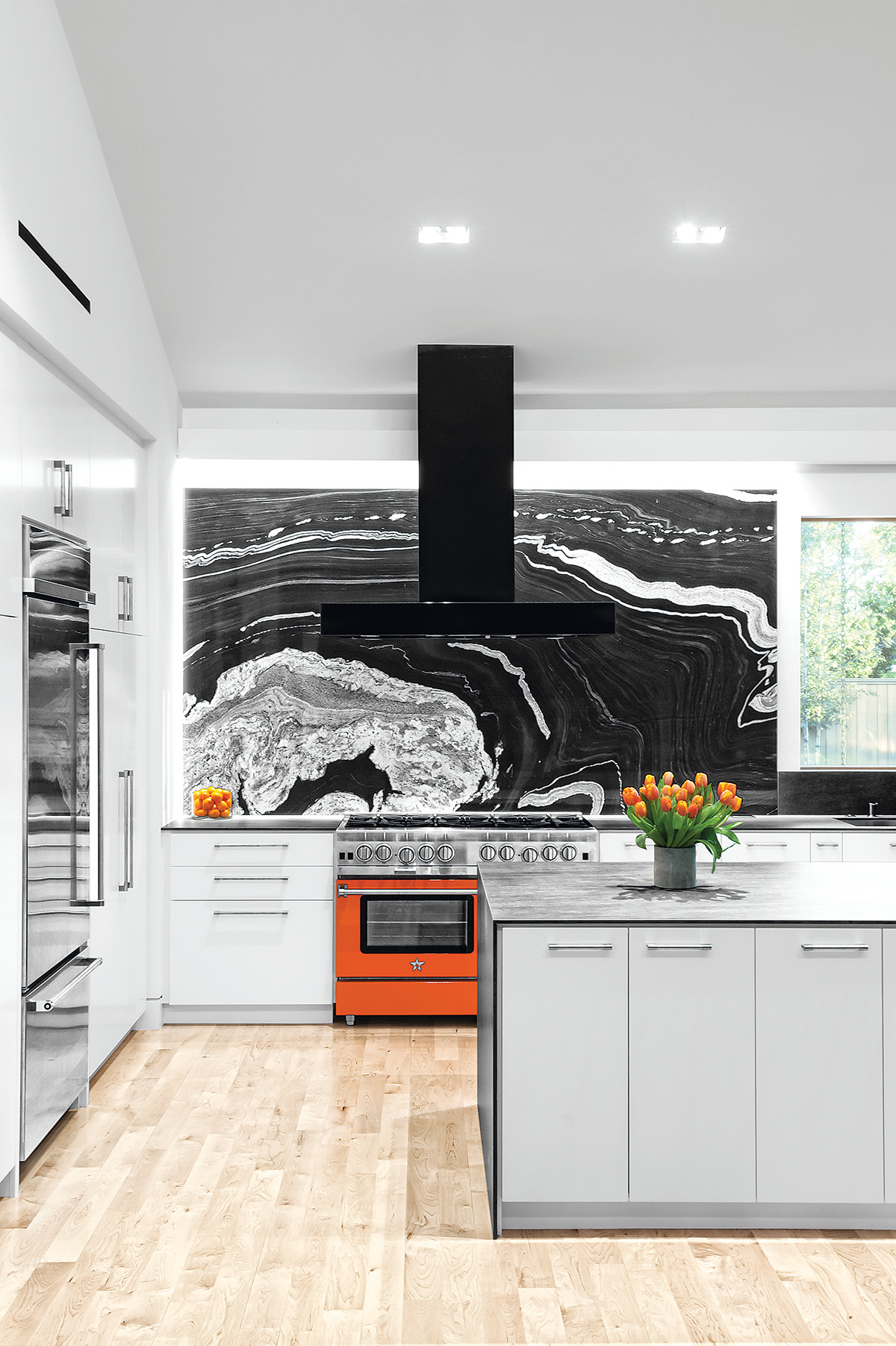 Houston, TX — Susan and Charles Elder had lived in their Houston, TX residence since they were first married. Decades later and now retired, they wanted a place that better suited their needs, so they embarked on a major renovation with RD Architecture’s Kathleen Reardon, AIA, and Susannah Devine, LEED-H, interior designer and principal of the Houston-based residential design firm.

“They loved the neighborhood and community,” says Devine. “Susan had grown up just six houses down the street, and together the couple raised two daughters in this home.”

However, shortly after the preliminary
drawings were completed, the remodel
morphed into a new home build project that was completed with Tryon Homes serving as the general contractor.

“There were only two original walls at the garage that remained intact, and the foundation looked like Swiss cheese because there were so many plumbing changes,” she continues. “It became more practical to redo it.” 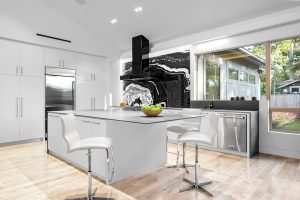 The seating area beneath the cantilevered countertop in the island is crafted with a ½” plate steel substrate for structural support, creating a completely open space for stools.

Although the focus changed to new construction, Devine’s clients wanted to maintain the spirit of the original floor plan…albeit with a bit larger footprint.

“All of the rooms are in the vicinity of their original location,” she explains. “All of the parts and pieces are essentially the same, it’s just that the house grew up a bit and is now better suited to the 21st century lifestyle.”

As the new design plans took shape, they focused on a home with descriptors such as bright, airy, minimal, functional and well organized.

“Natural light was extremely important to them,” says the designer, noting the abundance of oversized windows that led to the home’s colloquial moniker of ‘The Lantern House.’

Those in the front provide visibility all the way from the living room, through the dining room and into the kitchen, which showcases a stunning, full-height 3cm Black Horse granite backsplash.

“The Italian granite slab splash was the first finish selection made, even before we completed design development,” Devine says. “Susan’s father was a geologist, so they wanted to find a beautiful natural stone in memory of him. When we found the Black Horse, we were all struck by its beauty. We thought it would be a shame to cut any part of it off…so we didn’t! Instead of using it as a countertop, which was the original plan when we started shopping for natural stone, we made the entire slab work with the design as an artistic splash by Mother Nature. It most definitely makes a statement…especially considering that you can see it from the street!”

Because the granite is such a powerful and dynamic material choice, the designer opted to contrast its predominately dark coloration with much lighter custom cabinetry crafted by Jim Farris Cabinets. The solid beech cabinets are painted with a pigmented conversion varnish with a clear satin top coat in Sherwin Williams’ Extra White to keep the space airy and bright.

“My clients wanted the space to be clean and crisp, so it really couldn’t be any color other than white,” she says.

Since there are no upper cabinets, Devine worked with the homeowners to ensure adequate storage.

“The kitchen may seem small,” she admits, noting that its layout acts as a simple galley-style space with just two countertop areas. “But we included two huge cabinet units – one to each side of the (KitchenAid) refrigerator that are built in and recessed with finely detailed edges.” 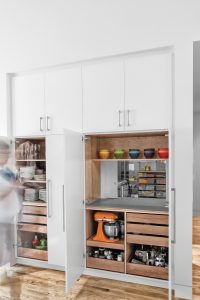 A second set of tall cabinet units was designed to store several sets of dishware as well as baking supplies. A unique feature of one of the cabinets is a hidden pocket door that, when opened, creates a pass through to the utility/laundry area where there is additional storage and a second refrigerator.

The unit to the left of the refrigerator is designed as a beverage center where her clients can store their coffee maker and a few bottles of wine, along with the associated mugs and glasses. Additionally, several drawers and a wealth of shelves store everything from small appliances to cookbooks. To the right is a day pantry with pull-out shelves for dry goods like rice, spices and vegetables.

On the other side of the kitchen, the designer included another set of tall cabinet units for storing several sets of dishware as well as baking supplies, including a large stand mixer. A unique feature of one of the cabinets is a hidden pocket door that, when opened, creates a pass-through to the utility/laundry area, where there is additional storage and a second refrigerator.

“I love doing hidden passageways,” she says, noting inspiration from one of her favorite designers, 18th-century cabinet-maker Jean-François Oeben, who was a master at creating hidden passages in cabinets. “In this house, my clients can set a pot of stew inside the cabinet and wait for it to cool before moving it to the secondary refrigerator. The pass-through makes it so much easier to move all kinds of things back and forth between the kitchen and the back of the house.”

Adding a pop of color

The designer complemented the granite backsplash and cabinetry with Neolith’s Basalt Grey sintered stone, finished in Satin with a 12mm eased edge, which she used as the island and perimeter countertops, both of which feature waterfall edges on one side. For the island, the cabinet maker cantilevered the seating area with a ½” plate steel substrate for structural support.

“It can, and has, supported a couple dancing on it!” she says laughingly.

Devine also used the sintered stone as the small ledge behind the sink.

“We chose the Neolith because of its material advantages,” she notes. “Its color also matches one of the mid-tones in the splash and it makes a nice contrast to the cabinets and the homeowners’ serving dishes.”

Although the bulk of the kitchen showcases neutral colors ranging from black and white to gray, the designer wasn’t afraid to add some pops of color, such as what is supplied by the 48″ six-burner BlueStar range in bold Pure Orange.

“Orange is one of Charles’ favorite colors,” she explains. “Plus, he’s the master chef and loves to cook for family and friends.” ▪