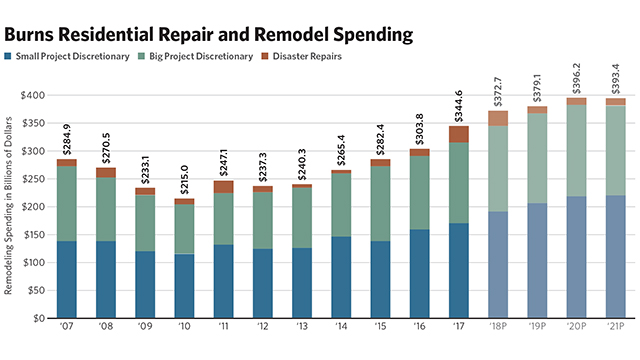 The remodeling market in 2018 is red hot, and it is expected to stay that way for the next few years. The underlying factors will switch from renters to owners and from bigger projects to smaller projects. (Note: Includes labor and materials)

Ask remodelers or kitchen and bath designers and dealers about current business conditions and they’re likely to be very upbeat. The flow of leads for new business is strong. Backlogs are growing. Home prices have risen to a point where people are feeling comfortable investing more in upgrades. In short, the kitchen and bath design industry is firing on all cylinders.

But that does not mean that kitchen and bath pros are worry-free. Prices for kitchen and bath appliances, fixtures, countertops and cabinets are all trending upward. And it’s also getting more expensive to keep skilled labor happy, so labor costs are rising, too. Those rising costs are getting passed along to clients in the form of higher prices. So far, clients are accepting those increases without too much push-back. But there are limits to how long clients will agree to higher prices.

According to economists who study housing and remodeling, the outlook for kitchen and bath design and construction activity is robust for 2019 and beyond. But unlike the past few years, it is not likely to be a period of fast, nearly double-digit growth. The high-water mark for existing-home sales will likely have been 2017, says Robert Dietz, chief economist and senior v.p. of the National Association of Home Builders, noting the strong correlation between existing-home sales and remodeling.

Todd Tomalak, a forecaster with John Burns Real Estate Consulting, agrees. He sees a six percent compound annual growth rate (CAGR) for the remodeling market as a whole, starting in 2019. That number includes both owner and renter remodeling activity as well as big and small project activity combined with disaster repairs. But because the professional kitchen and bath design market occupies a spot in the market that is a combination of owner-occupied and big project activity, the outlook for that important sector is less robust at one percent CAGR, says Tomalak.

Kermit Baker, chief economist for the American Institute of Architects and Harvard University’s Remodeling Futures Program, is slightly less bullish than the six percent growth rate suggested by Tomalak. The remodeling market’s growth rate will likely be in the “mid-single digits” in 2019, Baker says. And the growth rate is likely to experience slower growth beyond, but it will still be growing despite a number of economic, housing and demographic cross-currents.

Very few industry participants today want to discuss the possibility of an economic recession, but after a decade of economic expansion dating back to 2009, the bottom of the Great Recession, the gravitational pull of the business cycle means that a slow-down is coming and it’s only a matter of time.

A recession is defined as three consecutive quarters of negative growth in the overall economy. Dietz says the risk of a recession is very low for 2019. Rather, he says, the economy should grow at 2.5 percent in 2019. It will then slow to 1.3 percent in 2020. “It’s going to feel like a recession. Even though the economy will still be growing, it will be noticeably slowing,” says Dietz.

Tomalak and Baker say they are less inclined to see any economic growth in 2020. And Tomalak and the team at John Burns Real Estate Consulting now peg the risk of a declared recession in 2020 at better than 50 percent.

“The music is slowing down a little bit now. We are not going to see a lot more growth this cycle until we have the next recovery underway,” Baker explains. “So, I think there’s a nervousness and certainly that is triggered by this volatility that we are seeing in the stock market.”

Indeed, stock market growth in 2017 and early 2018 contributed to a buoyancy in high-end remodeling activity. But by the end of 2018, many of those gains had been erased. In addition, the growth in home prices seemed to be topping out in some places. According to realtor data, the level of reported “price cuts” to high-end, for-sale homes is rising. Yes, there is equity, but the outlook for residential real estate to grow further is softening.

Reduced housing affordability is a big-picture issue that factors prominently into the outlook for remodeling activity over the next few years, notes Dietz. Last fall, the U.S. central bank, the Federal Reserve, began the process of raising interest rates amid signs of overheating in the economy. Those rising rates have negatively impacted mortgage-interest rates, which are expected to soon exceed 5 percent, up from 3 percent a few years ago. With home prices rising generally, higher rates make buying a new or existing home even less affordable.

“We have a real housing affordability crisis on our hands currently,” says Dietz. “Only 56 percent of new and existing-home sales are affordable for a typical family, and if trends hold, we will fall below 50 percent affordable.” The main reason for the trend, he explains, is that incomes have not risen fast enough to keep pace with rising home prices and now rising rates. More housing starts are coming, and it makes sense that those will primarily be in entry-level, single-family homes and townhouses. These price points are consistent with Tomalak’s remodeling forecast favoring low- to mid-range kitchen and bath activity and pivoting away from larger high-end projects at the end of 2019 and into 2020 and beyond.

Higher rates and higher home prices have created a “lock-in” effect says Baker, which has slowed mobility. People are living in their homes much longer and are investing in repairs and some updates to those homes.

“The one piece that we care about with respect to kitchen and bath activity is that you have this lock-in effect that’s happening, where it makes even more sense to remodel your existing home than to move,” Tomalak explains. “History tells us that when this happens, there will be a greater number of projects, but at a lower price point.”

Harvard University’s Joint Center for Housing Studies recently published a report showing that more than half of U.S. households are now headed by someone age 50 or older. It supports the notion that baby boomers are currently dominating the housing and remodeling markets, and primarily responsible for driving luxury kitchen and bath activity. In addition, the report, “Housing America’s Older Adults 2018,” suggests that only 3.5 percent of that group have living spaces to best accommodate the trend toward aging-in-place: single-floor living, wider doors, etc. This highlights the massive size of the opportunity for needs-based bathroom modifications and upgrades in the coming years.

At the same time, millennials have overtaken baby boomers as America’s largest living generation. This group, aged 22 to 37 in 2018, is delayed in comparison to past generations when it comes to homeownership rates and remodeling activity. Today’s kitchen and bath design market is, therefore, one where the mix of projects skews toward those wanted and needed by well-heeled baby boomers. But millennials are slowly becoming a factor in the high-end kitchen and bath market, starting with more activity in the low- to mid-ranges.

“Half of the spending in the country is households 55 or older, so it is a big segment and a growing segment of the market,” says Harvard’s Baker. “And we haven’t quite gotten the millennials kicked into gear yet in terms of buying homes and spending on projects. So, the profile of the typical remodeling client has gotten a little bit older recently and they are asking what they can do to make their homes more comfortable given that they will be there another 10 or 15 years. Those projects tend to be focused on kitchens and baths.”

Demographics and migration patterns are impacting housing markets in various regions of the country in different ways, says NAHB’s Dietz. The mountain states of Utah, Idaho and Montana are seeing population and job growth outpacing even hot markets like Nashville and Dallas. Housing affordability in these locations and other “secondary” markets throughout the south are receiving new residents who are moving away from high-cost areas on the east and west coasts.

“The reason why those areas are seeing population and job growth is due to the fact that Los Angeles, San Francisco, Portland and Seattle are relatively unaffordable, particularly for younger households,” explains Dietz. “In addition, the South is where you are seeing a lot of younger household growth – Texas, Florida, the Carolinas, Georgia.” ▪