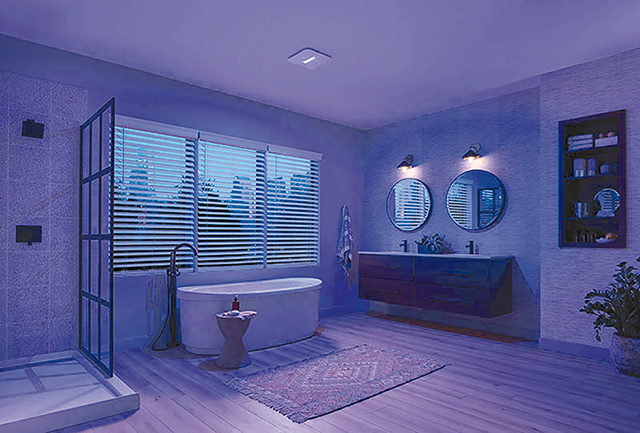 Homeowners are focused on wellness, especially in the bath, and gravitating towards products that deliver health benefits, such as the Broan SurfaceShield LED Exhaust Fan Cover with Vyv Antibacterial Light, which protects against mold, bacteria and fungi growth.

NEW YORK — In the next 10 years, American homes will grow “healthier” in design and more amenable to aging in place by homeowners, according to a recent survey conducted by the International Furnishings and Design Association.

The IDFA’s “Vision for the Future of Home” survey, whose results were released late last year, also found that it is likely that more homeowners will want to live with modern design and the enjoyment of modern conveniences – “like sensor-activated everything” – as wellness and aging-in-place considerations become more of a priority in residential construction and design.

The IFDA survey, which mirrors recent findings by the National Kitchen & Bath Association, the Home Improvement Research Institute and other trade organizations, was conducted during the mid-year 2020 stages of the COVID-19 pandemic, “and may reflect the effects of the nation’s social-distancing lockdown,” IFDA survey director Susan Hirsh said.

According to the New York-based IFDA, association members predicted as far back as 2010 the current trends toward fewer rooms and the waning of formal living and dining rooms for the homes of 2030. Indoor/outdoor rooms were also seen as continuing to be popular.

In 2010, however, IFDA members also predicted that, by now, much home equipment and many home furnishings would be activated by voice and sensor, Hirsh noted, adding, “that has not come true to the extent predicted (although) this year’s survey also foresees continued growth in the popularity of voice and sensor activation.”

Hacking and privacy concerns were listed as the current top reservations about the “smart” home, while earlier complaints that technologies complicate simple tasks and are difficult to use were not as much of a concern among survey respondents this year, Hirsh added.

Among the IFDA’s other major survey findings:

The survey also addressed how the design community will function. In 2030, 92% predicted more virtual reality presentations. The trend of consumers ordering over the internet (83%) will continue to rise, the survey found, while 73% of respondents said they see an increase in the trend toward clients doing their own ordering, and 72% say the trend toward clients being budget-conscious will continue. ▪