Bringing the outside in was the entire focus for the renovation of this historical kitchen, located in a community developed on a foundation of love for the outdoors. 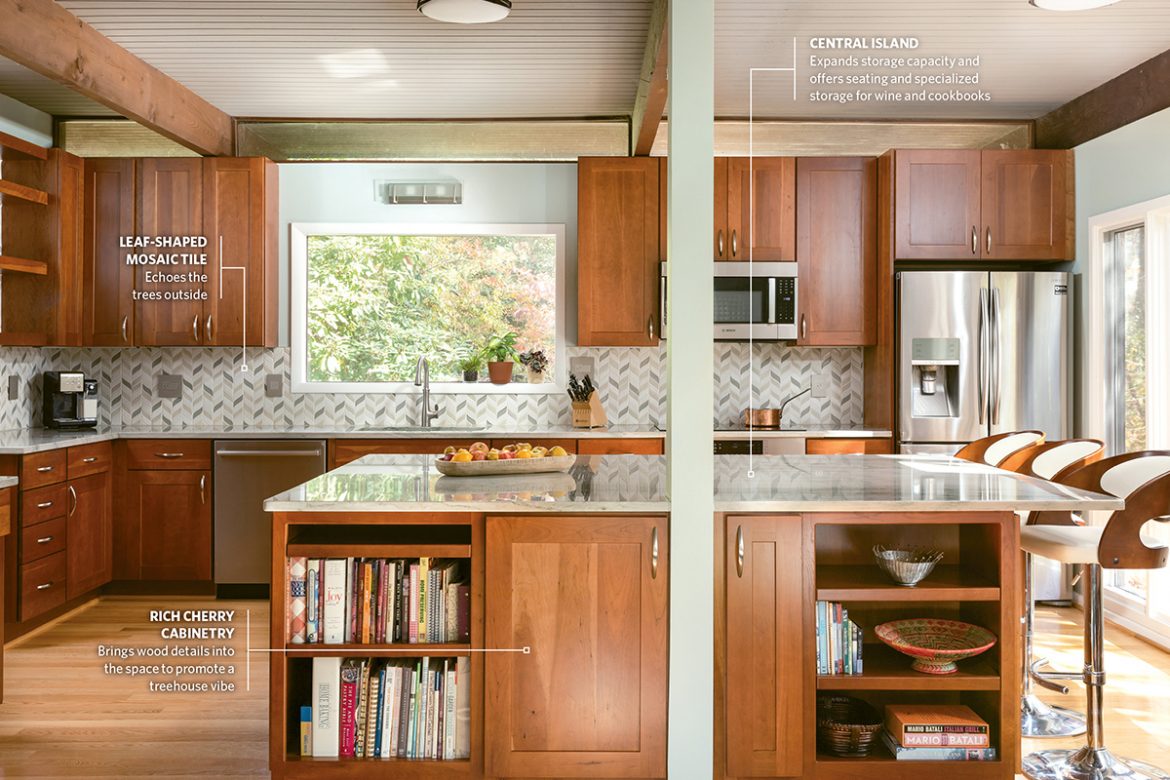 RESTON, VA — Nature has always been a fundamental component of living in Reston, VA. In fact, in 1964, the city was founded on its premise and worth within a community, with its founder, Robert Simon, stressing that beauty, both structural and natural, is a necessity and should be fostered. As a result, the city’s 60,000+ current residents enjoy more than 1,300 acres of open space.

Vernon Walker, Reston’s first director of development and use of common outdoor lands, realized its value, too. His efforts to promote nature and encourage Restonians to enjoy the outdoors were so widely respected that the city’s Nature Center, where he also served as director, now bears his name. The influencer and naturalist also lived within the community, on its south side in a flat-roof structure that Anna Gibson’s clients now call home.

“My clients were looking to relocate to this side of town, and they were really excited to find this home,” says Gibson, CKBD, owner of AKG Design Studio in Herndon, VA, who worked with Macco Remodeling & Restoration on this project. “Knowing the home’s history and Vernon Walker’s love for Reston’s trees and the concept of living in harmony with its wildlife made it even more special since they love nature, too.”

The original Walker home – designed and built in collaboration with architect Kenneth Bonner – was intended to bring the outdoors in by providing visual access to the abundance of trees. Vernon Walker’s son, Jeff, fondly recalls his childhood home’s placement on the edge of the forest and its close proximity to natural areas including the bridle trails and walkways leading to Snakeden branch stream.

“For that period, it was quite progressive,” he says, noting his parents were fortunate to work with talented and trusted people who could support their vision of living amongst the filtered light, seasons and flora and fauna of the outdoors.

He also remembers his father’s dedication to minimizing the impact of the home’s construction.

“The builders and subcontractors helped preserve the site by minimizing impact on root systems, boles and communities of the natural flora,” he says, adding that recognizing the need to preserve the natural areas – while providing access to utilities, sewer, phone and electricity – was a fundamental part of the plan.

Gibson indicates that the home’s architecture is reminiscent of Frank Lloyd Wright, adding that although its foundational concepts remained intact, time – as well as water damage – had taken its toll on the interior. The cabinetry was original to the home and renovations along the way had compartmentalized the kitchen and dining areas with partitional walls that hindered function. The home’s flat roof and historical designation also created challenges.

“As a flat-roof home, the ceiling and the roof are the same inside and outside,” she explains. “That emphasizes the indoor/outdoor connection we wanted, but since it’s a historical home, we couldn’t make any changes to it. We couldn’t even paint it because it had to be the same as the exterior. We also couldn’t paint the beams…or add any additional [ceiling] lighting.”

They were, however, able to remove the non-load bearing walls to reopen the kitchen and improve its flow. Filling it with nature-inspired elements honors the home’s architecture and original residents.

“Our goal was to create a treehouse feeling and bring nature inside,” Gibson indicates. “My clients didn’t want to create just a kitchen. They wanted a space that also felt one with nature.”

That treehouse vibe begins with a base of oak flooring and rich Kemper Cabinets cherry cabinetry, the latter stained with a seemingly appropriate Cattail hue. Both bring wood details into the space. Gibson accented the cabinets with Top Knobs Nouveau Collection bow pulls in a Brushed Satin Nickel finish. Lights beneath the upper cabinets provide task lighting.

The reconfigured footprint of the kitchen allowed for additional cabinetry, which greatly increased storage capacity. In particular, a newly expanded and relocated island includes seating as well as wine cubbies and open shelves for cookbooks. A vertical load-bearing beam, which couldn’t be removed during the renovation, was incorporated into the island so it wouldn’t obstruct flow.

“The family loves to host parties and play games,” she says, “so the island is used for much more than just cooking.”

A pet station next to the tall pantry cabinets – which now conceals small appliances in addition to dry goods – houses everything the family needs for their dog.

“When you have such an open space, you don’t want to trip over bowls,” she says. “It was important for my clients to find a place to organize everything. They love it because leashes, food, bowls, everything, is off of the floor and out of the way.”

Adding a message board to the end of the wall cabinet serves as command central and keeps the family’s keys handy. A petite countertop surface below serves as a temporary drop-off zone or a place to set a bowl of fruit for a quick, healthy snack.

“Organization was important to my clients,” she relates. “We got creative with the space we had so that a lot of things that used to live on the countertop and take up a lot of space were cleared away.”

In the main kitchen area, floating shelves, stained to match the cabinetry, create the illusion of another window, opening the space and adding to the outdoor/indoor feel.

“I don’t like adding cabinetry willy-nilly,” she says. “Because we added so much more storage, we could include the open shelves so the kitchen wouldn’t feel so cabinet heavy. The shelves balance the large window and complement the sink window so it almost feels like there are windows on three sides of the kitchen.”

Continuing the focus on nature-inspired elements, Gibson chose TileBar’s Nabi Sprig mosaic tile in its Tundra colorway for the backsplash that clads multiple walls, including the ones behind the floating shelves and the Bosch range and those that surround the window above the Elkay Lustertone undermount sink, which is accented with a Kohler faucet.

“The tile’s leaf motif brings the outside inside,” she says. “And its colors reflect those that my clients see when they look out the windows. It feels like the trees and the backsplash blend together.”

Additionally, Gibson selected Sea Pearl quartzite for the countertops. Its variations of gray with hints of green against a creamy background echo the natural theme she wanted.

Choosing a polished finish enhances the reflective properties of the natural stone, which is an important consideration given the lighting challenges within the space.

“There are a lot of matte finishes in the kitchen, such as the cabinetry and the flooring,” she says. “Using the polished finish on the countertop helps bounce light around the room and is a good way to light up a kitchen, especially one that doesn’t have a lot of light, such as this one.” ▪