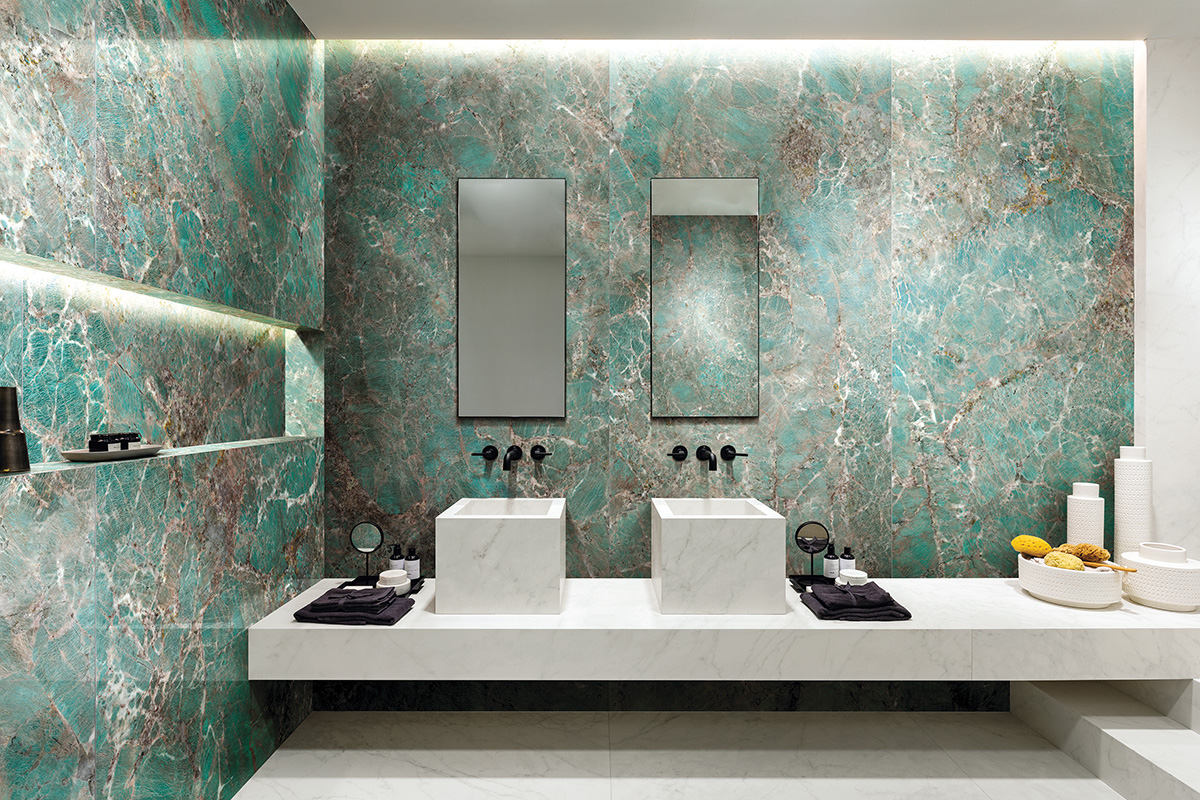 If you were aiming to spot the country’s hottest tile trends, you would have found Coverings 2019 a target-rich environment. Billing itself as North America’s largest tile and stone show, the annual event showed the industry’s best at Orlando’s convention center in April.

Though the title sponsors are the Tile Council of North America (which includes a robust Mexican tile industry presence), Ceramics of Italy and Tile of Spain, there were tile makers large and small from around the world represented, as well. Turkey, Brazil, Japan, China and Portugal all brought their tile companies (though, sadly, not their media kits).

Shown here are some of the top trends seen around this year’s show floor. Look for them in a showroom near you soon.

In the “everything old is new again” category, numerous historic styles are getting updates and revivals. Terrazzo is one of those, with strong interpretations in color and neutrals throughout the show. Cement looks are still trending, and part of a related graphic/small-format trend, as well. Hexagon and rhombus shapes were heavily represented in the graphic and small-format categories.

History was revisited with art deco and tin tile inspirations, and subway tile got fresh looks in artisanal textures and a variety of sizes. Mid-century modern made a stylish appearance, too, with interesting patterns, especially Sant’Agostino’s Appiani, and glass block looks from Iris U.S.’s partnership with Diesel Living. Herringbone patterns were also widely seen, especially in stone and wood styles.

Plant looks grew into a mini-trend this year, with colorful leaves reminiscent of retro wall-paper from Cotto D’Este, monochromatic dimensional carvings from Lunada Bay Tile and vintage florals from Appomattox Tile Art Company, among others.

Wood looks show no sign of going away, and also embraced a bit of retro with parquet inspirations showing up in numerous lines. Overall, brands continue to vie for most realistic with new textures, and for most affordable with competitive pricing and production processes.

Along with wood, concrete and natural stone looks continue to dominate. Metallics and glass showed up widely, too. The metallics ranged from oxidized to industrial, with antique slabs and modernist perforated panels. The glass went either glossy and translucent or mirrored. There were fabric remnants around the show floor, as well, reminiscent of stronger presences at Italian and Spanish shows in recent years.

One of the interesting technical trends at the show was the ability to make glossy tiles slip resistant. This increases their potential use in more spaces, without sacrificing their looks. American Wonder Porcelain, Sant’Agostino and Marazzi, among others, were offering this. Gloss also got some softening in various lines for a more sophisticated style. Refin, Lea and others were showcasing these satin finishes.

The most interesting tile offerings blended materials cleverly. Wood played with concrete at American Wonder Porcelain, with stone at Landmark, with graphics at Lamosa and with metallics and cement at Fanal. Metallics also played with marble at Refin and in lustrous glazes from Torrecid. There was a beautiful mélange of material inspiration everywhere
you turned!

Some lines chose to make their style statements with interesting sizes and shapes. Hexagon, rhombus and trapezoid forms made enough appearances to delight your high school geometry teacher. So did tile with dimensionality, sometimes in white on white for subtle drama, other times in playful color blocks.

Two tile sizes showed up as trending: 24″x48″ and 48″x48″, especially for floor, but small tiles in the 6″ to 10″ range also trended strongly, especially in numerous retro series. Florim chose 8″x8″ and 8″x10″ for its Airtech paver line, most handsomely in London Black.

Porcelain also showed off its versatility with countertop (including StonePeak’s and Tau Ascale’s built-in induction), sink, furniture, light fixture and shelving applications, as well as floor, wall and pavers.

You could make the case that there’s no finer artist than Mother Nature, but tile manufacturers are coming impressively close with their natural stone renderings in porcelain. These slabs are getting larger and more realistic with every show. Book-matching is now more widely available, to the delight of perfectionists everywhere. While white marble looks continue to delight, many are warmed by gold tones (rather than cooled by grays).

Dark stone inspirations showed up strongly, as well, but colorful exotics from around the world stole the show. Torrecid and Sicer, both suppliers to the tile industry, dazzled with vibrant gemstone looks, Emilgroup’s Level brand impressed with its exotic slabs and Florim thoroughly delighted with its Tiffany-toned Etoile, inspired by a Brazilian stone.

Tennessee may be best known for its whiskey, country music and walking horses, but it’s fast becoming a major global tile manufacturing center. Throughout the tour, executives from other countries – especially Italy – cited their U.S.-production facilities in the Volunteer State.

Access to the huge and growing U.S. market, raw materials, interstate highway system and a “business-friendly environment” are cited as the reasons.

It makes one wonder 1) whether there’s a future for tile “tasting rooms” the way Napa and Sonoma have captured wine tourists and New England has lured leaf peepers, 2) whether there’s also burgeoning Italian cuisine and cultural scenes in Tennessee, and 3) when will Coverings two-step up to Nashville?

If you don’t want to wait that long, Cersaie, the massive Italian expo, takes place in Bologna from September 23 to the 27, TCNA is bringing a new tile show, to be called OB Expo, to Mexico City in October 2019, and Cevisama, Spain’s major expo, runs from February 3 through 7 in Valencia. ▪