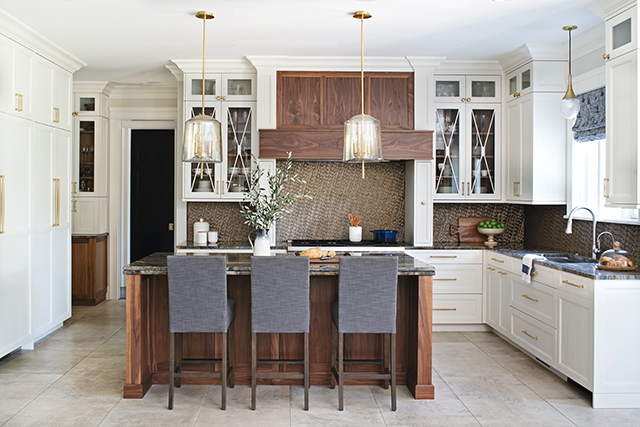 As recently retired owners of a stone and tile showroom, these homeowners are familiar with the design industry. As a result, they had some preliminary ideas about what they did – and did not – want for their new Glenview, IL residence, where they served as the project manager/general contractor with design services provided by Paulina Cervantes and Andrea Fripp, co-founders of Dual Concept Design in Chicago, IL.

“For one, they didn’t want gray,” says Cervantes. “They also wanted a bit more than a white kitchen.”

“As we talked more about the design, the couple kept asking us, ‘what’s next?’,” adds Fripp.

At the heart of the discussion was creating a home that offered something different…“something that was bright and airy with a simplified design style,” says Cervantes. “Our clients had come from a much larger home that was built and decorated in a very traditional style. This time around, they wanted something more transitional with pops of contemporary touches. Plus, they wanted something that would serve as a bright, blank background for their extensive art collection.”

Cervantes and Fripp featured brushed brass throughout the space, including in the pendant lights that hover above the island. The island and perimeter base cabinets are topped with Cezanne quartzite that showcases a bold, wavy mix of blues, greens and browns for movement, color and depth.
Photos: Eric Hausman

After perusing a wealth of inspiration images, the clients were drawn to a two-tone kitchen that features perimeter cabinetry painted with Benjamin Moore’s White Dove, which provides a subtle contrast to the Benjamin Moore Pale Oak wall color that covers many of the common area walls.

“The Pale Oak is very light so we could add ‘punches’ of color and interest with design elements, including their artwork and brass accents used throughout the home,” explains Fripp. The lighter paint colors also keep the space ‘clean’ and coordinate well with the 24″x36″ porcelain floor tile that resembles a neutral-hued limestone.

The designers complemented the white cabinetry with a stained walnut island and focal-point ventilation hood, all of which were sourced from a local woodshop. The warmth of the walnut serves as a classic, timeless element that balances the brightness of the white cabinetry. To promote a transitional design vibe, doors and drawer fronts feature clean lines, simple profiles and a small bead detail for interest. Select upper cabinets also include glass fronts with decorative ‘x’ mullions.

The island and perimeter cabinets are topped with Cezanne quartzite that showcases a bold, wavy mix of blues, greens and browns.

“It brings in the perfect amount of movement, color and depth to the space,” observes Fripp.

“Being in the stone business, our clients know natural materials inside and out and they wanted something with more character,” adds Cervantes. “In recent years, they have sold a ton of marble as well as gray and white stones, such as Iceberg quartzite. While beautiful, they didn’t want any of those for their new home. As we looked through available slabs, he kept coming back to this Cezanne slab. He loved it, so we went for it. In the end, it was the perfect choice and it adds such character and beauty to the kitchen.”

“And it perfectly matches his personality, which is characterized in the unique and colorful shirts he often wears,” adds Fripp.

Cervantes and Fripp carried many of the same design elements from the kitchen into the nearby butler’s pantry and bar, where Cezanne-topped walnut base cabinets are contrasted with White Dove uppers that are accented with the textural mosaic tile in between that serves as a backsplash. Both areas also include an ample dose of brushed brass accents, including cabinetry hardware and mesh door inserts.

Because the countertops make such a bold statement, the design duo knew they had to keep the backsplash behind the cooktop and along the sink wall quiet. However, they didn’t want it to be boring. Building upon a theme set by brushed brass accents that are prevalent throughout the space in elements such as the Cyan Design pendant lights above the island and over the sink, the Myoh cabinetry hardware and the Armac Martin mesh grill cabinet door inserts in the nearby butler’s pantry and bar area, the designers suggested Ann Sacks’ Rhythme Mosaic tile. Its Micro Diamond pattern in the Oro colorway adds a relatively monochromatic yet textural/metallic appeal.

“The mosaic is super tiny,” explains Cervantes. “It is so small that no grout is needed. It almost looks like wallpaper because you can’t see the seams. Overall, it adds a nice texture and color to the space…without competing with other things in the kitchen.”

Cervantes and Fripp repeated many of the same design elements in the nearby butler’s pantry and bar, where Cezanne-topped walnut base cabinets are contrasted with White Dove uppers that are accented with the textural mosaic tile in between that serves as a backsplash. Both areas also include an ample dose of brushed brass accents, including cabinetry hardware and mesh door inserts.

“Brass is a trending metal, but using a brushed finish offers a more subtle approach that is beautifully implemented in the space,” says Cervantes.

The mesh inserts are also featured in the adjacent four-panel door that leads to the walk-in storage pantry.

“Instead of doing a plain slab door, we added the inserts to tie it visually to the butler’s pantry, and to give it some interest,” says Fripp. ▪