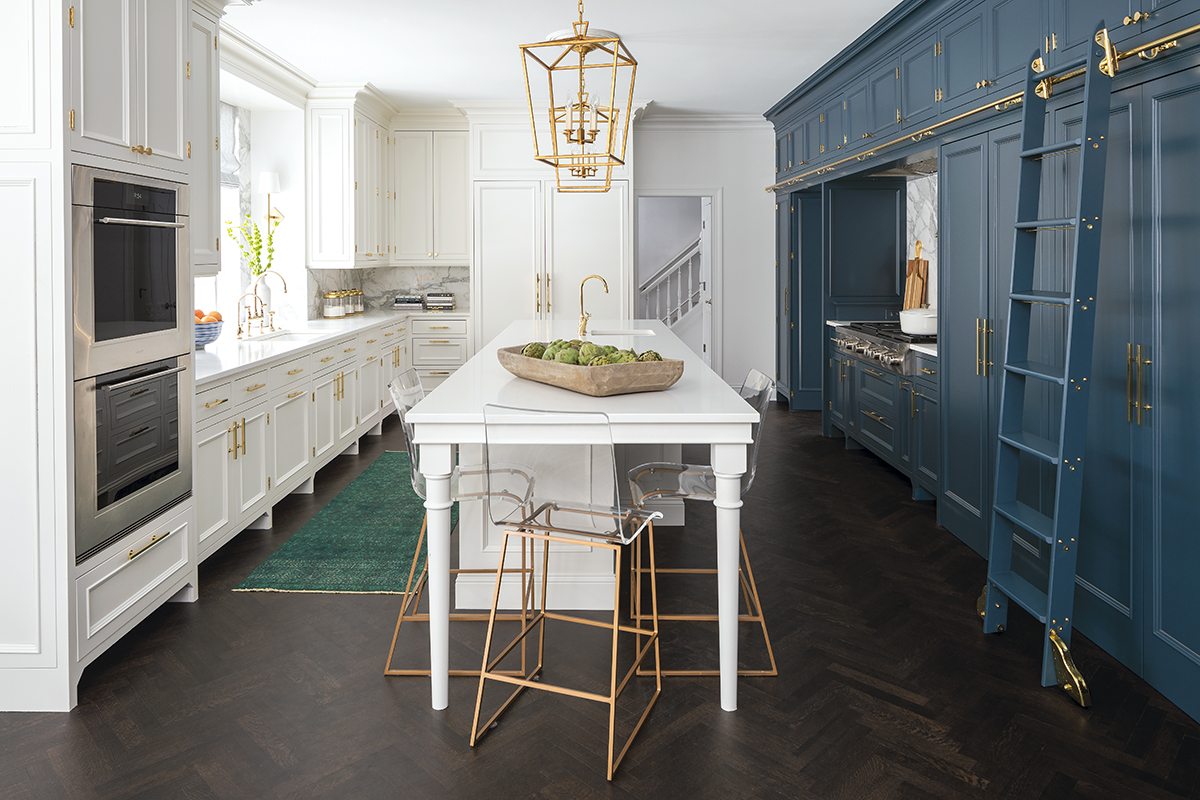 Minneapolis, MN — Given only about three months to complete this kitchen renovation from concept through construction, the team at Murphy & Co. Design, in Minneapolis, MN, was challenged to be efficient and focused so their clients would have a smooth transition as they relocated from the East Coast to the Midwest.

“The remodel was intense, but rewarding,” says T.J. Majdecki, principal, who designed the kitchen as well as the home’s entry, eat-in dinette, butler’s pantry and mudroom with Jeff Murphy, president. The duo also collaborated with John Kraemer & Sons (general contractor) and Martha O’Hara Interiors (interior designer). “Our clients were relocating from the New York City area, and their timeline meant that delays were not an option,” he explains.

Fortunately, they knew just what they were looking for so decisions came relatively quickly and easily, with many of them completed via phone call or e-mail. 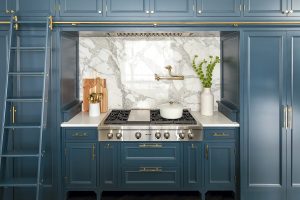 To balance the high function of the anchoring cabinet wall, the design team included a cooktop set within an alcove that is accented with a full-slab marble backsplash, brass pot filler and quartz countertops.
Photos: Troy Thies Photography

“They had fallen in love with the distinct traditional architectural styling of the house set within the idyllic French Lake area of Orono,” he continues. “Its style, proportions, layout and design detailing felt very familiar to them since they were similar in kind to those of their previous home. The family wanted to implement a renovation that stayed true to those roots and maintained the home’s character, but they also wanted to update the spaces and aesthetics to better reflect their personalities and seamlessly integrate a style and function that fit their family.”

To accomplish those goals, the team needed to re-imagine the undersized kitchen to better meet the needs of a large family bustling with activity, especially considering the kitchen is often filled with energetic teenagers.

“As with many homes of a previous era, this home offered ample square footage,” Majdecki says. “But many of the rooms and spaces within it were disproportionate.”

In particular, the narrow kitchen measured just 14′ wide. Additionally, an internal wall visually and physically separated it from the informal dining room.

“Our clients wanted an open kitchen with an eat-in island and an adjacent dinette,” he says. “They understood that the kitchen truly is the heart of the home, and the new spaces needed to be reconfigured to allow the daily activities of the family to be centered around the kitchen and dinette. They were used to living in a home where they routinely ate breakfast in the kitchen and the kids did their homework at the island so we needed to find a way to accommodate everyone without blocking interactions of how the space was used.” 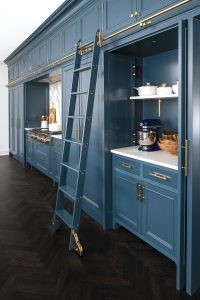 A rolling ladder system provides access to the upper level of cabinets. Brass hardware, which matches the finish on the hardware used on the cabinetry, serves as ‘jewelry’ for the space.

As such, they tore down the wall to connect the kitchen and dinette, which solved one dilemma but created another related to ensuring adequate storage.

“We needed to get very creative so we didn’t sacrifice function for form,” he adds.

Their solution was to create a 30′ wall of 24″-deep custom floor-to-ceiling cabinetry, designed by Murphy & Co. Design and built by Artisan Cabinet & Design, where every square inch was meticulously planned. Moulding profiles and cabinet details reinforce traditional aspects of the space and its design intention while sleek, square 10.5″ brass bar pulls from Lew’s Hardware add a modern touch.

“The cabinetry wall seamlessly envelops both the kitchen and dinette and creates the visual connection and singular space the family was seeking,” he says. “All of the detailing, including the intricately designed cabinetry, multi-step moulding profiles, turned leg features of the island, cabinet hardware and even appliances, were carefully examined and selected by the team to create a delicate balance of time-honored traditional character with an interjection of modern style.”

Aesthetically, the statement-making wall, sheathed in Farrow and Ball’s deep and dramatic Hague Blue, provides contrast with the perimeter and island, which are both clad in Benjamin Moore’s classic, softly shaded White Dove.

“The dark color grounds the space,” he says. “If that wall was white like everything else in the kitchen, it wouldn’t be as impactful. And, the two-toned approach, while beautiful, also adds an element of modern uniqueness.”

Functionally, the cabinet wall serves as the workhorse of the kitchen and is home to several concealed ‘stations,’ including a pantry for everyday dry goods, coffee bar/small appliance storage and even a gift wrapping/arts and crafts center. 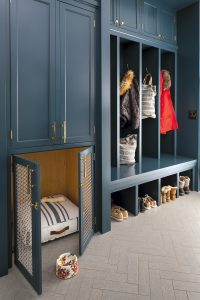 In addition to the kitchen, designers at Murphy & Co. Design also reimagined the mudroom. Special design details include cubbies for the kids’ gear and a kennel for the family dog. They also included a drop counter for keys, mail, etc. and a charging station. The cabinetry matches the blue hue used in the kitchen.

“The kids often have school projects and they wanted convenient storage for supplies,” he states, adding that this area also proves useful for the occasional gift that needs wrapping. “All of the concealed spaces were important to the homeowners. They are high-use zones in their everyday lives but they tend to collect clutter, so we designed areas that provide all the function the family needs in a way that can be closed off and still feel congruent with the surrounding cabinetry. It’s a concept that a lot of clients seem to want now…everything within arm’s reach so it’s easy to use, but also easy to contain so it doesn’t clutter the space. It needs to look ‘clean,’ but still be functional.”

Symmetry was also taken into consideration in the cabinet wall’s design, where access to the adjacent butler’s pantry and formal dining room are provided via doors that match the doors of the concealed “stations” to blend seamlessly as one unit.

“Those concealed doorways are a highlight element for the homeowners,” Majdecki notes.

To provide access to the upper level of cabinets, the design team included a Putnam rolling ladder system accented with brass hardware to match the cabinetry.

“These types of ladders aren’t typically used in kitchens, but they provide safe access to upper cabinets,” he says. “Plus, for this kitchen, it’s a neat architectural detail and the brass hardware adds some ‘jewelry’ to the space.”

To balance the high function of the anchoring wall, the design team also included a Wolf cooktop set within an alcove, which is accented with a full-slab marble backsplash, brass pot filler and DuPont Corian Snow White quartz countertops.

“The cooktop alcove, as well as the surrounding cabinetry, provides a very unique architectural element that pushed the intended design aesthetic,” Majdecki notes.

Repeating several elements, such as the marble backsplash on the perimeter wall and quartz countertops as the perimeter and island tops, connects these areas to the backdrop wall. The 12′-long island, which provides in-kitchen seating and ample workspace, is also home to several undercounter appliances and a second sink.

Additional perimeter elements, such as the Sub-Zero paneled refrigerator and freezer and the Wolf double oven, were selected to handle the demands of nightly meals. ▪