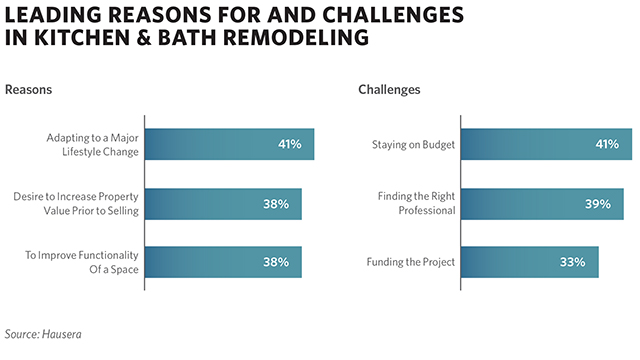 PLEASANT PRAIRIE, WI — Homeowners across the country – and across all age groups – are “highly active” in renovation, with eight in 10 having remodeled a kitchen, bath or laundry room in the past two years, and six in 10 having plans to do more in the next two years.

That’s the key finding of a survey conducted by Hausera, a newly launched online kitchen/bath specialty retailer. Hausera’s first annual “Truth about Kitchen and Bathroom Renovations Survey,” whose results were released late last year, was aimed at gleaning insights into kitchen, bath and laundry room remodeling. The survey, involving 1,000 U.S. homeowners, was conducted between July 25 and Aug. 6, 2019, according to Hausera.

Across kitchen, bathroom and laundry room renovations, surveyed homeowners said that adapting to a major lifestyle change – such as a changing family size or accommodations due to a disability or aging – was the biggest reason for undertaking a renovation (at 41%), according to the Pleasant Prairie, WI-based Hausera. Other reasons for remodeling included a desire to increase property value prior to selling (38%), and to improve the functionality of a space (38%), the survey found (see graph above).

According to the survey’s findings, homeowners across all age groups said that the three top challenges in remodeling were staying on budget (41%), finding the right professionals for the project (39%) and funding the project (33%).

Some 68% of homeowners hired a specialized design professional to handle their kitchen, bathroom or laundry room renovation, while 61% hired an interior designer, 58% hired a remodeling contractor and 45% hired an architect, according to the survey.

When choosing a design professional or contractor for home renovations, 38% of surveyed homeowners said a professional portfolio that shows examples of past projects “matters most,” according to Hausera. By comparison, 35% said a recommendation from friends or family members is most important, while 34% said online ratings and reviews matter most.

Among the survey’s other findings:

More than one-half (51%) of the surveyed homeowners also said they plan to buy products that include “green,” environmentally friendly features in the next year. The most-wanted products with green features are: energy-efficient lighting (52%), energy-efficient dishwashers (49%) and water-conserving showerheads (45%), toilets (43%) and faucets (42%).

Homeowners in urban areas have been most active in renovating, Hausera found, noting that 86% of surveyed homeowners living in urban areas said they updated their kitchen, bathroom or laundry room in the past two years, compared to 76% of suburban homeowners and 69% of rural homeowners.

In terms of style preferences, 51% of homeowners identified “modern” as the ideal style for their kitchen and bathroom, followed by contemporary (29%), traditional (29%) and eclectic (28%).