Usable Spaces for All 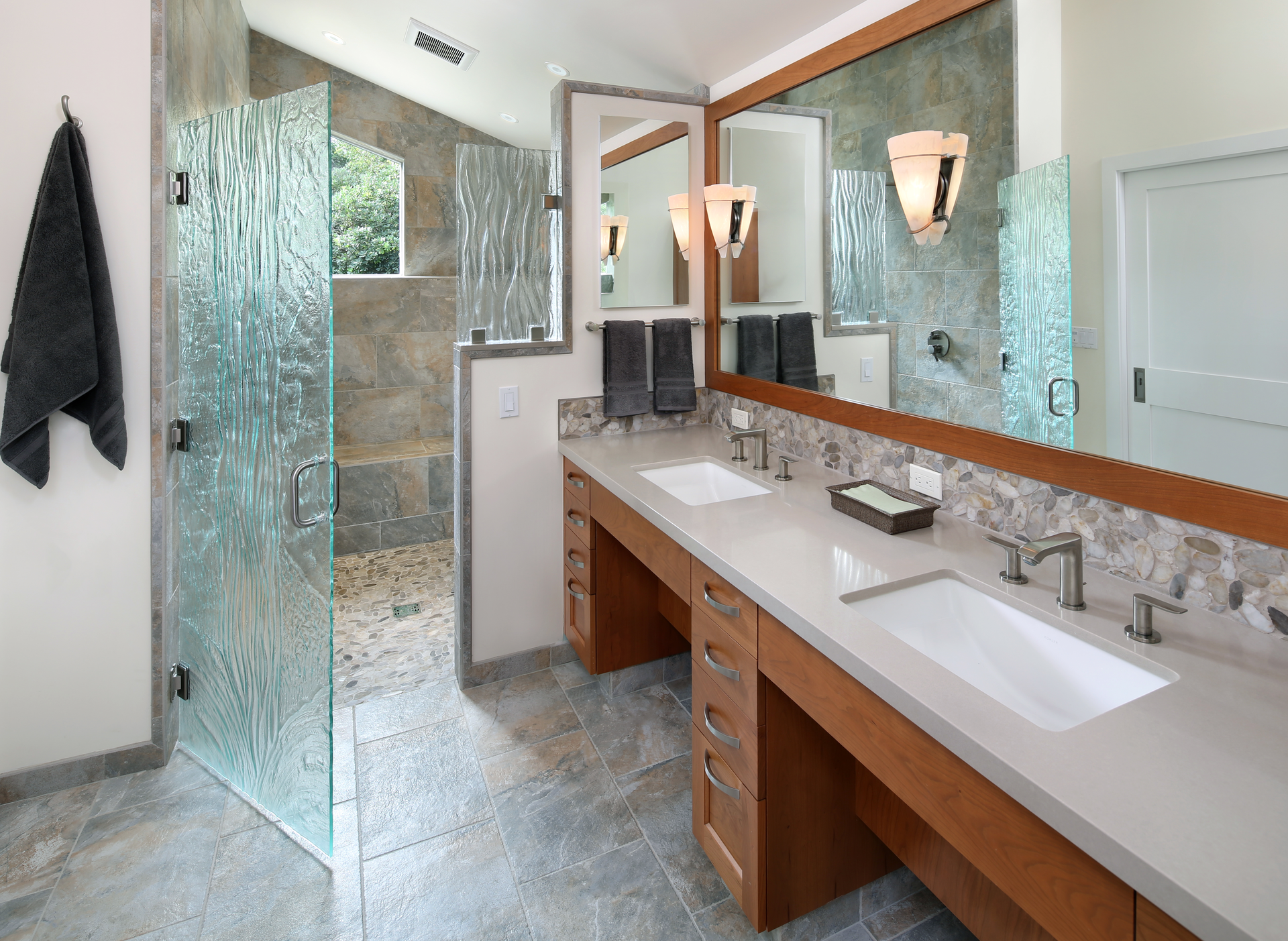 Oftentimes, incorporating Universal Design into a kitchen or bath is initially driven by a desire to accommodate a specific circumstance, such as someone who wants to age in place, or someone who has physical challenges and needs help navigating the home. These aspects of Universal Design offer the most familiarity. They are what people usually think of when they hear the term.

They are also what can create the greatest challenges when initiating a discussion about Universal Design with clients who may but turned off by the stereotype associated with the term. “They think of it only as design for people who are handicapped,” says Dan Klappa, owner/president, MCR, UDCP, jDj lifestyle design remodel, in Greenfield, WI.

Often, he believes, they may respond reluctantly with comments such as, “I don’t need assistance,” or “I don’t want my home to look like a hospital.”

However, the broader definition of Universal Design – creating environments that can be used by everyone, regardless of age or abilities – is much more inclusive, making it an easier ‘sell’ to clients once they fully understand its value. It can certainly include someone who uses a walker or wheelchair, but it can also include someone who may simply be carrying a full laundry basket through a hallway, or a petite person who wants to knead bread dough at the kitchen counter. These situations can be made more accommodating with Universal Design by making hallways wider and countertops shorter, respectively.

“It goes so much further than ADA compliance,” says Carolyn Cook, owner/designer, LiveSmart Design, in Charlotte, NC. “It really enhances design in general.”

“It isn’t only about making a house accessible to wheelchairs,” agrees Genie Nowicki, CKD, CBD, CID, CAPS, CGBP, senior designer, Harrell Remodeling, in Palo Alto, CA. “It’s about making a home safe, accessible and comfortable for everyone. That means making it easier for kids to work alongside mom in the kitchen. It’s also about giving Aunt Sue a place to sit so she feels included.”

“There is a lack of public awareness about Universal Design,” adds Tammy Kaplan, CID, CAPS, Images in Design, in Cranford, NJ. “People often think it’s only for those with disabilities. But that isn’t what it’s about. It’s about having a home you don’t ever have to change, no matter your age or abilities. If, from day one, your home is equipped with Universal Design principles, you won’t ever have to make it adaptive because it already is. Universal Design is about good design … for everyone. It’s smart design, common sense design, and it’s important that our industry talk more about it.”

Klappa agrees. “Universal Design is in its infancy,” he says. “Not many of my clients are educated about it because no one seems to be marketing it.”

That means designers typically broach the subject first. Clients who may initiate the conversation are typically older, although people of any age who need assistance also ask about it.

The latter was the case for Cook, who recently remodeled the kitchen of a young mother who is losing her eyesight. “The wooden stairs leading to the kitchen became a blank slate of one color, so we painted the bullnosing a different color, which then became an accent,” she says. “Now, when she comes down the stairs, she can see the treads. They are actually very pretty, and the color has become a design element.”

Robin Amorello, CKD CAPS, Atmoscaper Design, in Topsham, ME, is also currently working with a relatively young woman with lower back issues. “She has asked me to design with cabinets that are 1.5″ taller than standard because she is tall and hunching over is a problem for her,” she says. “For all consumers, it’s about throwing the standards out the door and realizing they can have something customized to their specific needs.”

Varying countertop height, as well as vanity heights in bathrooms, is a popular Universal Design element that is being mainstreamed into many spaces. “We set up vanity height based on needs,” says Klappa. “Sometimes we make them higher, sometimes lower.”

Functionally, this accommodates people of varying heights and abilities. “If someone likes to bake, kneading dough on a 36″ counter is just too high,” says Kaplan. “Instead, I’ll do something at 30″. The low counter is great for kids who now don’t have to climb onto a chair to reach the countertop. It’s also great for someone who might be in a wheelchair. The lower countertop accommodates many different people…a child, a baker and a disabled person. It’s good design for everyone.”

It can also be beautiful design, Kaplan continues. “You can easily turn a variety of countertop heights into a design feature,” she says. “You can make a portion of the countertop butcher block or other material that identifies it as a specific work space.”

Nowicki generally fields more requests for Universal Design from older clients. “They are thinking about staying in their home after retirement,” she says. “They’ve seen their parents have to move and they want to remodel in a way so they can stay. I also get a lot of calls from people who already have a need, or are anticipating a need, such as someone with ALS where there is a clear trajectory of progressive limitations. I don’t typically get calls from younger families. It isn’t mainstreamed enough yet that a 30-year-old is asking for it. But we are proposing it. I suggest that, if they are going to spend the money to remodel the space, let’s not create something that will be a limitation later.”

There can also be a certain amount of denial, notes Amorello, especially from aging baby boomers. “They admit there is a need to plan, so we are doing more things like blocking in showers and around toilets for future installation of grab bars,” she says. “I also just finished a project for a couple approaching 70. They are nearing retirement and they wanted their house to be ready. We remodeled their kitchen and three bathrooms, all at the same time. When we were finished, they had slip-free floors and curbless showers in the bath. In the kitchen, we designed cabinets that were accommodating of their height and reach.”

ENHANCED AESTHETICS
Products and materials offered in the marketplace, coupled with greater creativity on the part of kitchen and bath designers, make Universal Design easily mainstreamed into kitchens and baths to not only improve function, but enhance aesthetics as well.

“In many cases it’s the same products being used,” says Cook. “They are just used more mindfully … for example, locating a microwave someplace other than its typical location above a stove.”

Oftentimes, people don’t even realize a space is designed with Universal Design principles.

“People are concerned that their new space will look like a hospital,” says Nowicki. “But with the products and materials available today, there is no way that needs to happen.”

Bathrooms are often the first target. “If a client can only adapt one room, I suggest doing the bathroom,” Nowicki continues. “That’s the room that can cause someone to have to move out of their home.”

Grab bars are a common starting point and are available in a dizzying assortment of styles and finishes to accommodate virtually any need or design aesthetic. Curbless showers are another frequent request because they give someone in a wheelchair or walker much easier access. But they are also being mainstreamed into many homes simply because of their beauty.

From a Universal Design perspective, you don’t have to step over a curb to get into the shower. “But from a design aesthetic, they are seamless and beautiful,” says Amorello. “It’s such a clean design, so I am doing curbless showers for people who are aging in place as well as for people who simply want a clean look.”

“When I started designing 20-plus years ago, the only reason anyone asked for a curbless shower was because someone in the home was in a wheelchair or used a walker,” adds Nowicki. “Now, because so many hotels have put in curbless showers, people think of them as a luxury item so they are asking for them.”

Wall-hung vanities and toilets also offer several benefits related to function as well as cleanability, as do wall-mount faucets. “Wall-hung toilets are easy to navigate around with a walker, and they offer greater flexibility in height,” says Amorello. “They are also easier to clean, and cleanability is a question that often comes up in discussions about Universal Design.”

Another popular design feature in a bathroom is more space around the toilet. Both Klappa and Amorello typically incorporate 36″ as a standard. “It isn’t code,” says Amorello, “but a wider toilet space is more comfortable for everyone.”

In the kitchen, products such as microwave and dishwasher drawers, drawers instead of hinged doors with shelves and appliances with doors that swing left or right rather than down all enhance functionality for everyone.

“It’s important to make sure the function of an appliance doesn’t prevent its use,” says Nowicki. “If, for example, the oven is at a comfortable height, but the door swing pushes you too far away from it to reach what’s inside, you don’t accomplish much.”

Sinks and cooktops can also be made more functional and beautiful. Provide an open area underneath so a wheelchair can slip below. “You can recess the panels so you still have some storage,” says Nowicki. “This, like many Universal Design elements, can easily be worked in to make it look like it was part of the design. In this case, it will look as though you are trying to create some relief in the cabinetry. You can add decorative legs, or stainless steel or screen panels … anything that might create interest in any design. It doesn’t have to look like Universal Design. You can also use doors that swing open to reveal a cabinet with no floor so someone can scoot underneath.”

KEEP IT SIMPLE
Sometimes it’s seemingly simple Universal Design elements that can be easily mainstreamed into a home, such as choosing levers instead of knobs for doors as well as faucets. “Levers are easier to use because you don’t have to grab them,” says Kaplan. “You can use any part of your hand to open a door or turn on a faucet.”

Wide hallways and doorways – 48″ and 36″ when possible – are easier for everyone to navigate, and adequate lighting can eliminate shadows.

Universal Design also isn’t always about the homeowner. Sometimes it’s about anyone who may visit. “‘Visitability’ is a term we use where we want people to be able to come to your home,” says Kaplan. “For that to happen, it has to be accessible, because a common reason why people may not visit is because they don’t feel safe. Personally, I have made my home accessible so my parents can visit. While you may not need anything, friends and family who visit may.”

Taking into consideration Universal Design principles can make the home accessible for everyone, adds Cook. “Visitability is a boiled-down version of Universal Design,” she says. “It focuses on three basic accessibility needs, including one zero-step entrance to the home, 32″ minimum doorways and a wheelchair-accessible bath on the main floor.”

The Art of Japandi