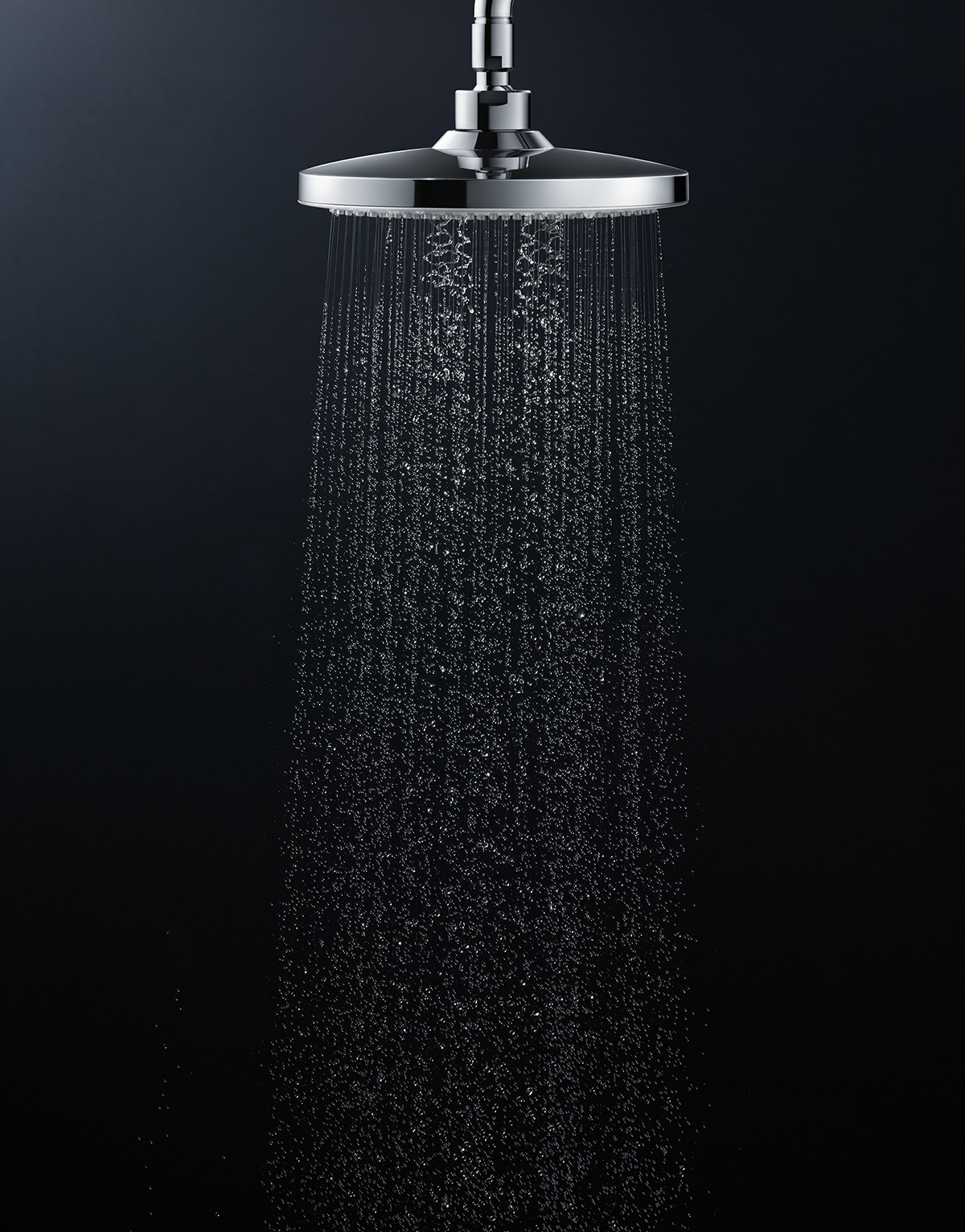 Our great-grandparents were grateful for indoor plumbing. Our parents and grandparents were delighted to have choices in faucet finishes. Our generation is seeking entertainment and enlightenment at our sinks and showers. And the industry is only too glad to indulge us.

Don’t be surprised if your next client asks about the “wellness” showerhead, the faucet with the cool water flow they spotted online or the benefits of chromatherapy in their master suite. 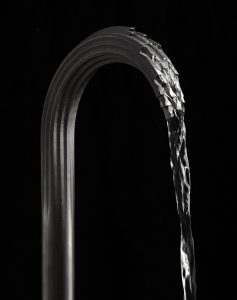 “Several manufacturers have introduced faucets in the past that have an open spout so that you can watch the water flow (Kohler comes to the forefront, although several manufacturers have similar type faucets – i.e. ROHL, Dornbracht and KWC, just to name a few), and some companies like Dornbracht have focused on the way water is delivered by eliminating aerators to create a ‘clear’ stream of water instead of the misty white of many aerated flows,” shares Jim Babbitt, executive director of the Decorative Plumbing & Hardware Association. DPHA’s members include companies like those, as well as companies that sell their products.

Perhaps the same impulse that draws us to Niagara Falls’ majesty, Walden Pond’s serenity, Hawaiian rain showers or Maine’s crashing surf inspires us to seek a soothing or dramatic cascade of water in our homes. Shadowbrook, one of DXV’s trio of pioneering 3D-printed faucets, could be your choice if nature-inspired water movement is called for. “The design of Shadowbrook focuses on the presentation of water delivery; its meticulously adjusted 19 separate waterways release water to mimic a shallow stream bouncing off pebbles,” says Jean-Jacques L’Henaff, v.p. of design, LIXIL Americas, DXV’s parent company.

Babbitt notes, “For the most part, it seems that faucets with unique water movements are found more in the powder room or guest bathroom, as opposed to the master bath. There are several reasons for this,” he explains, with the primary one being that “faucets with unique water movements tend to have a somewhat limited water flow, and in particular when talking about a master bath, this means that a tub will take a much longer time to fill.”

Another factor is limited offerings: “Since the specifier and customer are trying to coordinate the faucetry and accessory look throughout the [master bath], this usually means that the limited flow water delivery faucet styles are not used.” Thus far, for example, Shadowbrook is only available as a lav faucet, making it a stylish conversation starter for your next powder room project. 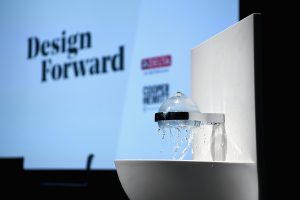 Another really interesting 3D-printed faucet with unique water flows is the Sphere, which was shown by Delta Faucets at its 2018 Kitchen & Bath Industry Show booth. It was only introduced as a prototype, so don’t expect to be able to specify it any time soon, but its wellness design inspiration (as shared by the KBIS team) and unique architecture of water flowing over a clear orb make it noteworthy nonetheless.

Lorin Moch, showroom manager for International Bath and Tile’s two San Diego area showrooms, observed about Sphere, “The lav set is made of glass and metal. Most faucets deliver a stream of water, whereas the Sphere delivers water like a rain showerhead at a flow rate of one gallon per minute, which makes it suitable for California. This is only a concept, but has not been produced for sale as yet.”

Fortunately, there are other offerings that blend soothing nature and unique style, and the shower seems to be their primary destination.

One of the challenges for shower system manufacturers is delivering performance while meeting ever-increasing water restrictions. Fortunately for designers and homeowners (as well as conservation!), many are meeting it with diverse and interesting approaches. Hansgrohe’s new PowderRain shower technology debuted at the Hospitality Design Expo and hit the U.S. market in July. “I do believe that it will be successful in that it makes the flow feel stronger while also saving water,” IBT’s Moch predicts. Being California-based, many of the showroom manager’s clients have to comply with the state’s toughest-in-the-nation codes. 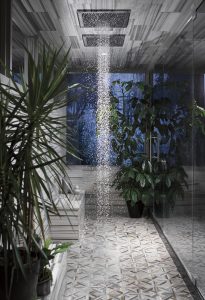 Kohler recreates the invigoration of a deluge with its Real Rain release.

PowderRain uses micro-spray heads to deliver a feeling of abundance. “First-time users were pleasantly surprised that the PowderRain shower products were flowing at 1.8 gallons per minute [the forthcoming maximum flow rate in the California market],” commented Derek Taylor, product manager for showering at Hansgrohe USA.

DPHA’s Babbitt is a big fan, too. He says: “I love not only the pattern but the lack of sound involved when it is delivering water.”

“These new showers address the wellness trend by offering consumers the opportunity to enjoy a spa-like experience in the comfort and privacy of their own home,” comments the brand’s spokesperson, Lenora Campos, adding, “from a sustainability trend, these showers save water as they deliver a luxury showering experience.”

“The showerheads give a feeling of a warm bath in a shower,” adds Moch about the Warm Spa concept. “It is a single pillar of water that runs from the showerhead. When the water hits the body, it envelops it without splashing and warms the body to the core. This feature is also available in hand showers,” she notes.

Kohler’s Real Rain turned heads at design shows like ICFF this season. “The power of rain, from soft, gentle summer rain to drenching deluge, is undeniable in its ability to create a sense of peace, its ability to cleanse the environment and soul. This is what we wanted to bring into a showering experience,” shares Raphael Rexach, the company’s smart home design studio manager. 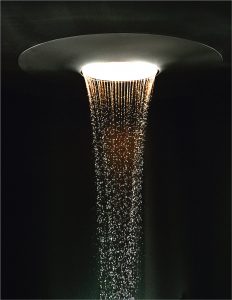 Let there be lights

Several manufacturers are blending showerheads with light and unique water flows. IBT’s Moch points to Dornbracht’s Sky and Nikles USA Showerheads. LEDs within showerheads were definitely a strong trend at Salone in Milan this year. The concept may have originated with Hansgrohe’s Axor Nendo LampShower. The new styles, though, are more recessed in nature, rather than making the fixture itself a design statement as Axor did.

One “multi-sensory” product showcased in Milan was Dornbracht’s Rainmoon, a showerhead with two rain-style flows and a soft glow from a lunar-inspired light fixture. The company’s U.S. president, Ingolf Matthee, shares his thinking about this new release: The goal was to incorporate hydrotherapy features, but add an element of delight. “Why are we so focused on health elements only, when a spa visit can be fun? Here is where Rainmoon comes into play.”

LEDs are definitely not new within the steam shower category. That’s where DPHA’s Babbitt sees their presence most strongly: “Chromatherapy sales when someone is having a steam unit installed in their home have continually increased over the past three or four years,” he comments. 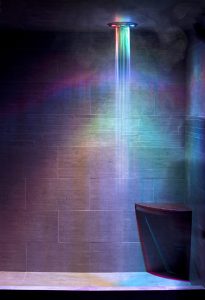 ThermaSol is one of the brands that has been playing in this space for more than a decade. The company introduced mood light in 2007 and added colors in 2012. The rain head was added four years later. The effect is similar to a rainbow caught in a water stream. “Showers needed a light, so adding mood and music to a light package seemed to be natural, while adding relaxation and enjoyment to the shower area,” recalls the company’s CEO, Mitch Altman.

Faucets and shower fixtures have come a long way since they moved indoors. You can now offer your clients hands-free and voice control, mood lighting, media streaming and dramatic water flows. The greatest challenge today is likely delivering a luxury experience on harsh water rations. That challenge isn’t a momentary trend; with major cities like Cape Town, South Africa facing fresh water “zero days,” it’s a factor we’ll all have to live with. Thankfully, our leading manufacturers are finding ways to make our jobs easier and lives more enjoyable with their water delivery strategies. ▪