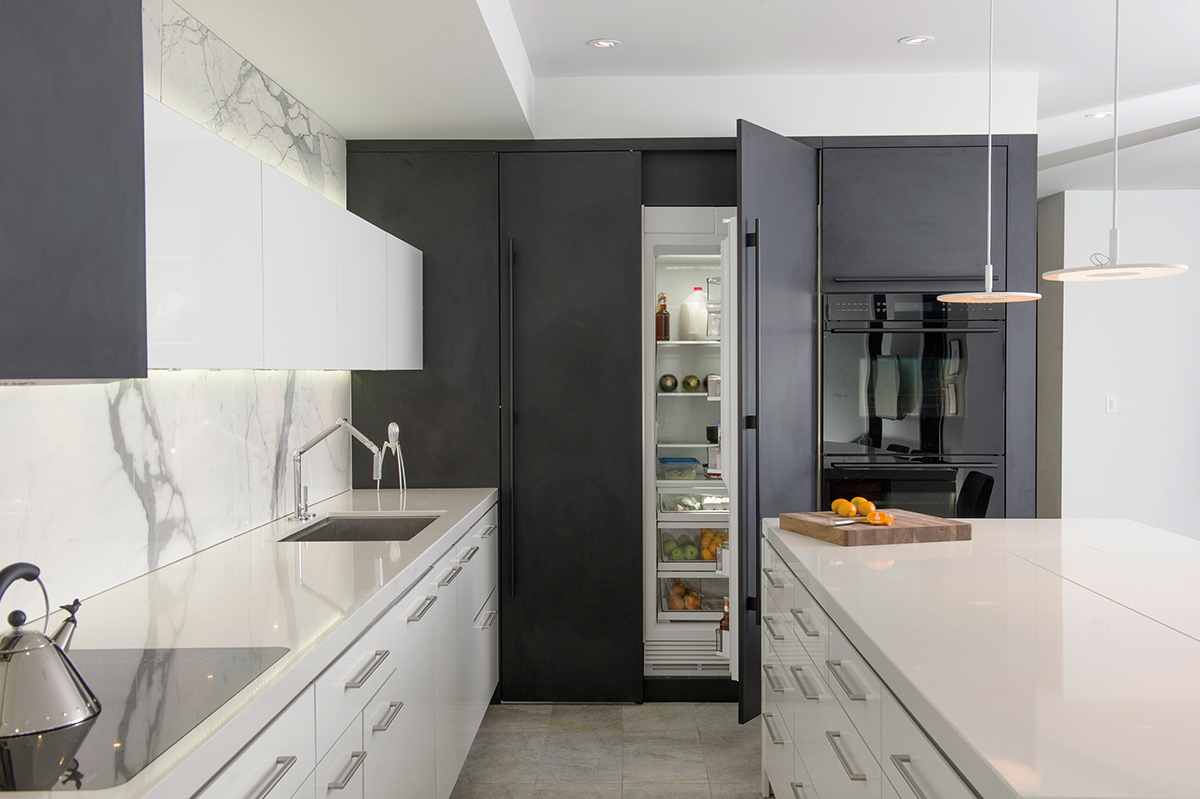 Dovide Secter of Secter Design Limited created this winning contemporary kitchen. Clever cabinet design provided the clean look and minimal aesthetic the designer required, since the space was his personal kitchen that he uses not only for his young family and entertaining, but also to show clients. Many clever elements help tame the clutter, including a motorized storage unit built into the center of the island that, with the push of a button, rises to reveal a number of small appliances. And, hidden behind what appears to be a wall adjacent to the wall ovens and refrigerator is a large pantry. The Sub-Zero integrated freezer drawers also blend into the design and allow the freedom to separate the refrigerator and the freezer.

The year 2015 was a positive one for the kitchen and bath industry, which saw a resurgence of consumers interested in remodeling their interior spaces. Kitchen and bath designers and industry professionals report that business is booming in many parts of the country, with pent-up demand finally having an impact.

Purse strings are a little tighter than just a decade ago, however, as people move cautiously forward from the economic downturn. And, today’s homeowner is more savvy than in years past, perusing the Internet to research available products and prices.

This often means that kitchen and bath designers have to be more creative with materials and designs, working within existing footprints and playing with their profit margins. Even with these new-found constraints, designers are turning out spectacular work that runs the gamut from updated traditional styles to ultra modern looks, and everything in between.

To recognize the work of these professionals, many manufacturers host design contests, interested in seeing how designers work with their products in the spaces they create. Some of the competitions are industry legends themselves, while others are up-and-coming. Whatever the case, the recognized works are stunning examples of top designs being created right now.

Kitchen & Bath Design News takes a look at a few of the competitions from 2015.

Sub-Zero and Wolf announced the global winners of its 2013-2014 Kitchen Design Contest this past fall at the “Best of the Best” Winners’ Summit & Gala awards dinner in Scottsdale, AZ. More than 1,700 entries from 48 states in the U.S. and 16 countries worldwide were evaluated, with 53 regional finalists chosen and eight grand-prize winners selected based on superior use of space, beauty in design and integration of Sub-Zero and Wolf products in kitchen design.

Eligibility for the Kitchen Design Contest required that all design and construction be fully completed within the contest period of January 1, 2013 through December 31, 2014. Qualifying designs had to include at least one full-size Sub-Zero built-in or integrated refrigeration unit and at least one Wolf cooking appliance as primary food preparation equipment, including ranges, rangetops, ovens and cooktops.

In the category of First Place Contemporary Kitchen, Dovide Secter of Secter Design Limited in Winnipeg, Manitoba was named the global winner and awarded a $20,000 prize.

The First Place Transitional Kitchen global award of $20,000 went to Mikal Otten of Exquisite Kitchen Design in Denver, CO for his kitchen design.
William Suk of Suk Design Group LLP in New York, NY was awarded $20,000 as the global winner of First Place Traditional Kitchen, which was executed in collaboration with Bryan Eure of EureHome.

Cosentino 2015 Kitchen And Bath of the Year

Cosentino marked the close of the year by announcing the winners of its 2015 Kitchen and Bath of the Year contest. The competition featured projects completed between January 1, 2015 and November 30, 2015, and all entries must have featured the company’s Silestone or Dekton material in the design.

The award winner in the Kitchen category was Laura Burleson of Virginia Beach, VA, while the bath award recipient was Alena Capra, CKD, CBD, of Boca Raton, FL. Both honorees were awarded an all-inclusive trip to Las Vegas to attend KBIS later this month, where they will receive special recognition by Cosentino.

BLANCO, the German sink and faucet manufacturer, challenged designers, specifiers and homeowners to design their version of the ultimate dream kitchen for its #BLANCODreamKitchen Contest.

Participants were asked to create a hand or digital drawing of an original idea that included a BLANCO PRECIS Medium Single Sink with drainer and a BLANCOCULINA Mini Faucet. A jury of design professionals examined the entries and chose first-, second- and third-place winners this past fall.

Hansgrohe USA’s second annual Hansgrohe + Axor Das Design Competition, which is open to architects and designers across the U.S., celebrates excellence in design, sustainability and installation of products from the Hansgrohe brand and the Axor brand in real-world projects. Two winners and three honorable mentions in the Residential Category as well as one winner and one honorable mention in the Hospitality Category were named.

The winning architect or designer of each category received $2,000 toward products of the Hansgrohe and the Axor brands, as well as a round trip to New York to be recognized in front of their peers at an awards ceremony this past October.

One of the winners of the Residential Category was Intexure Architects for the Tripartite House project in Houston, TX. The design-build firm specializes in creating environments for modern life, and incorporated a range of Axor and Hansgrohe products in the main kitchen and secondary kitchen, as well as the six bathrooms.

The second winner in the Residential Category was ZeroEnergy Design for its design of a Boston, MA-based two-story family loft. The company, which is committed to ecologically sensible design, creates living spaces that use at least 50 percent less energy than code requirements. The urban kitchen and bathrooms now incorporate a range of products from Hansgrohe and Axor.

The Honorable Mentions in the Residential category included: FIELDWORK Design & Architecture for a West Hills residence in Portland, OR; Andrew Mikhael Architect for a midtown condo in New York City, and a penthouse project in Herriman, UT, done by Lake City Loft.

Moen Thoughtful Designer of the Year

Kirsten Erikson of Gonyea Home in Minneapolis, MN has taken home the grand prize in the first-ever Thoughtful Designer of the Year Awards from Moen. Erickson’s winning kitchen project was part of a custom home designed in early 2015.

Through the newly created award, the company wanted to honor trade professionals who incorporate thoughtful elements into their kitchen and bath designs. This thoughtful design process involves taking the time to listen and watch to gain the insights needed to provide a meaningful value to customers.

Erikson was awarded $20,000 toward her next project. In addition, 10 entrants were also recognized for their efforts and received a new Moen Velocity Rainshower.

Elkay & medallion Cabinetry hosted the 2015 Kitchen Design of the Year competition, the company’s first-ever social media contest for designers to showcase their best work using Medallion Cabinetry. Held this fall, the company invited users of Facebook to vote on their favorite kitchens from among the Top 25 finalists. A Grand Prize winner and two runners-up were announced in November.

Mark Wishnow of Wish Kitchens and Baths in Hagerstown, MD was the Grand Prize winner. He received a $4,000 vacation package, a professional photo shoot of the submitted kitchen, an iPad and the official title of 2015 Medallion Kitchen Design of the Year. First runner up Brett Shaffer of MidSouth Building Supply in Richmond, VA and second runner up Rich Coulton of Lakeville Kitchen & Bath in Lindenhurst, NY each received a professional photo shoot of their submitted kitchens, as well as an iPad.

Duravit showcased its third annual Designer Dream Bath Competition during 2015, adding a new category to spice up the competition. The contest encourages architects and designers to reimagine their own personal bathroom spaces using Duravit’s latest collections – Cape Cod, ME by Starck and L-Cube.

Participants are invited to submit a sketch or rendering of their dream bath featuring these products. The winner, Mark Mangapora of Fenton, MI, received $10,000 toward the Duravit products of his choice, as well as professional photography of the completed project.

This year’s contest also included a category for built projects. Entrants were invited to submit a completed project from the past year that featured Duravit products in the design. An award of $5,000 worth of Duravit products was presented to Houston-based Intexure.

The 2015 Crystal Design Awards Competition, which is open to independent kitchen and bath designers, also acknowledges other top designs, which are chosen as Crystal Choice Winners.