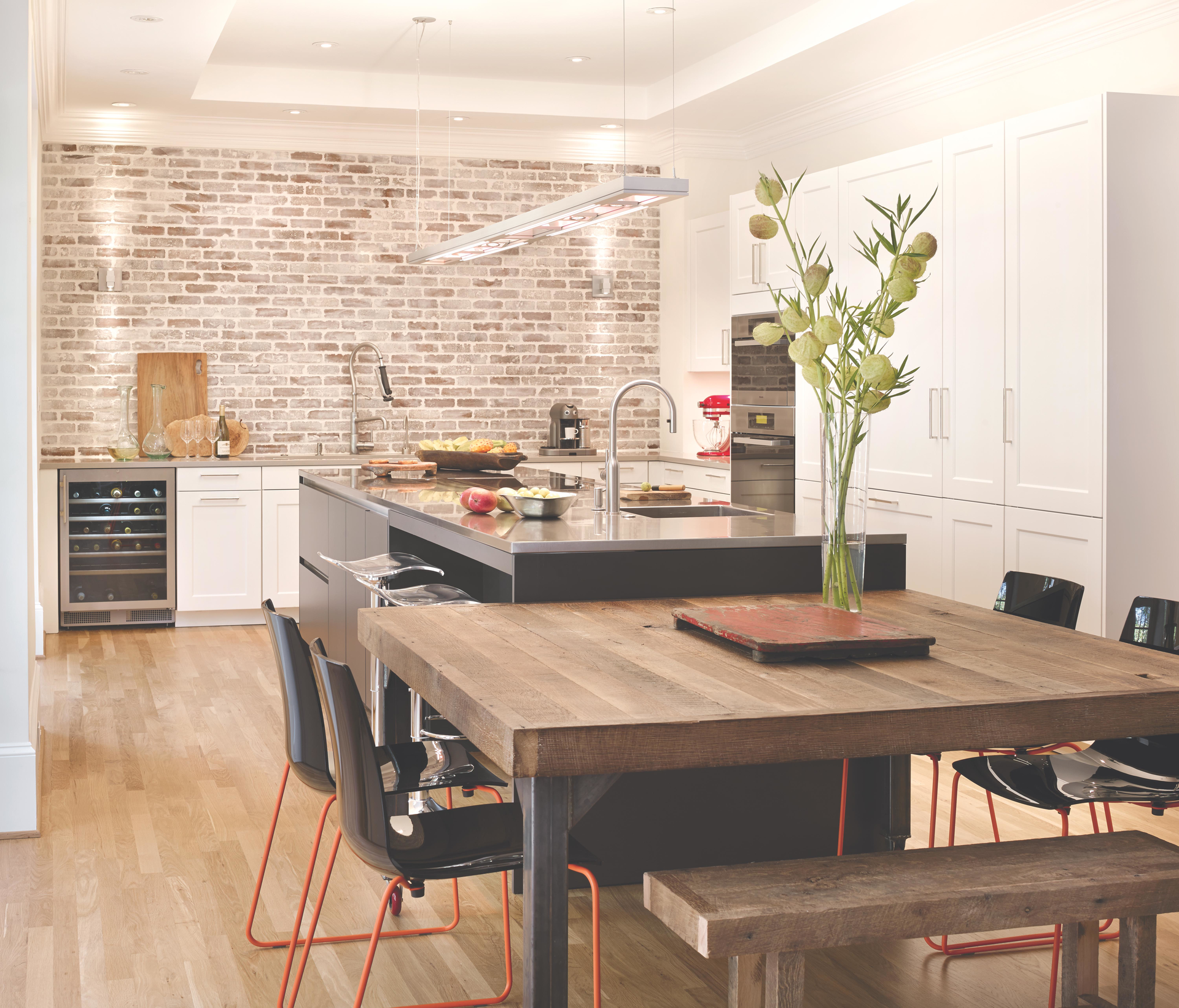 ATLANTA — Shortly after the owners of this Atlanta home transferred to the Georgia city three years ago, they began a process of transforming the residence, working with Monika Thiels of Staged to Sell Atlanta to create a more modern style within the home’s traditional framework while forming a connection to the outside.

“The house was extremely traditional,” says the interior architect. “We worked to open up the floor plan as much as possible, removing bookcases, refinishing hardwood floors, painting walls and banisters, etc.”

“The 1990s-era home was traditional, but not historical,” he says. “It had very familiar forms and mouldings, but the homeowners wanted to see how far they could push the envelope of the house while keeping a kitchen that looked like it belonged.”

The duo worked together to incorporate just the right amount of modern elements to blend with the traditional setting “without making it off-balance,” says Thiels. “There is such a fine line between being modern, without being too contemporary. This house is traditional, and you can’t overcome that. But we created a new space that is a good marriage between what the house represents and what the homeowners’ tastes represent.”

KEEPING IT TRADITIONAL
Paneled doors on the SieMatic Lotus White Lacquer cabinetry around the kitchen’s perimeter support the design’s traditional aspects, keeping it grounded to the bones of the house. The paneled doors also grace tall pantry cabinets that flank one side of the kitchen, encompassing a Miele convection oven as well as a convection steam oven. The perimeter also includes a Thermador refrigerator and Liebherr wine refrigerator. “The classic, recessed pattern isn’t complicated, but it is a panel,” says Rao.

The stately brick veneer wall also goes a long way toward maintaining the traditional feel. It was a point of debate, Rao notes, adding that he and Thiels considered several different surfaces, including a sleeker, more modern, tile, along with open shelving.

“Part of the luxury a remodel offers is that you can revisit decisions for appropriateness and feeling, even after a project is underway,” says Rao. “Material selection for the wall evolved. We deliberately weren’t using it for cabinetry because it would have been too overpowering for the room, and too closing visually, but we knew we needed something.”

“It is such a prominent wall,” adds Thiels. “With tile, the kitchen became too stark, too minimalistic. But the brick balances the modern, sleek cabinets with the traditional part of the house. It pulls everything together and brings in some outside character we were looking for.”

The rusticity of the rolling table also embodies traditional design. “It’s a very planky kind of wood…clean, but not modern,” says Rao. “The table had many design lives…as a built-in table, as a purchased table, as a table with seats and backs, as a table with benches and caisson-style ottomans. The end result is something different…a combination of seats and benches.”

The flexibility the table offers is an important consideration as well, as is its connection to the island. “Being able to pull it away from the island offers the ability to seat a very large number of people,” he says. “She has extended family from Italy and South America, and he has family from Germany. When they come to visit, they stay for a bit, and it can be a big crowd.”

One final traditional element is the chalkboard-encased column between the living room and kitchen. “Originally it was part of a built-in desk that was removed,” says Rao, who notes the new kitchen footprint is a combination of two rooms. “But the column ended up staying because it was too expensive to take out. We didn’t want just a sheetrock box, so several ideas were put forward, and the chalkboard was the one that had legs.”

“White and gray are both neutral colors,” says Rao. “They have no hue, providing a neutrality for everything else. But the room isn’t stark. Maintaining warmth – which we accomplished with natural materials, hints of color and an expansive connection to the garden – was a consideration, and was often referred to and discussed throughout the process.”

The island’s dimensions were also influential to the design.

It features a Blanco sink and Gaggenau induction cooktop. “The cooktop has a downdraft hood that totally disappears so it becomes one with the island for a very sleek, minimalistic look,” she notes.

Rao accented the island with a single Edge Lighting linear Lyra halogen light above. “It trends toward modern,” he says. “An island of this length needs something different than individual pendants. That design is so ‘done.’ We know what it looks like. Finding a single fixture to bridge the space wasn’t the easiest to do, but it is very functional and practical while unifying the island to the ceiling and the room.”

The island also makes it easy for two cooks to work in the kitchen, which was an important design goal for the homeowners. “They both like to cook,” he states. “The previous kitchen was u-shaped, and when they were working in it, someone was always facing a wall. This kitchen has the ability for people to face each other in more than one place.”

“They also enjoy entertaining in a very casual way,” adds Thiels. “In this kitchen, someone can be cooking, and someone can be talking…and lingering.”

Rao and Thiels included multiple counter spaces with multiple sinks and two Miele dishwashers. “That helps two cooks deal with dirty dishes that are generated during prep,” Rao says. “If you are constantly generating a mess you can’t clean up on your own, you have to go into the other person’s zone and that becomes a problem.”