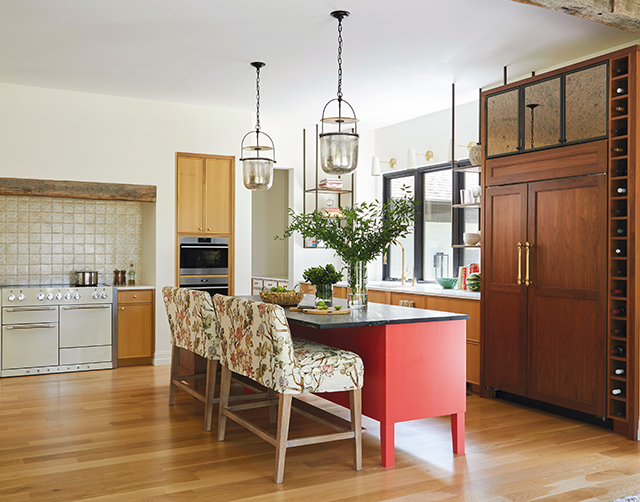 Grand Rapids, MI — Prior to building their new residence, the owners of this home had lived in historical dwellings. So, when they considered the design and construction of their new home in Ada, MI, their love for character, history and intricate details was a major driver in the decision-making process.

“Their goal – and our biggest challenge with a new build – was to create a home that felt collected over time, rather than done all at once,” says Todd Wiley, senior designer, TruKitchens in Grand Rapids, MI, noting a collaboration with Deidre Interiors (interior designer), Insignia Homes (builder) and Lorenz & Co. (architect). “Plus, the homeowners wanted a beautiful space for the family to spend time together…a place that is eclectic and bespoke as well as nature-inspired and full of character and details.” 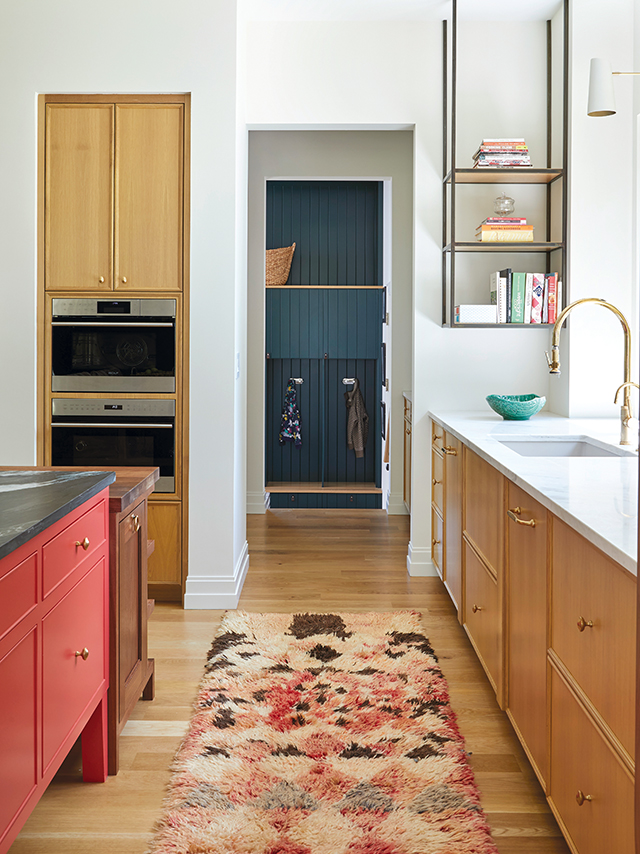 Walnut serves as the foundation of the island extension, which is combined with painted maple in a coral-colored hue. Dropping the height of the extension gives it a furniture feel, and topping it with distressed walnut butcher block offers a nod to nature, as do the soapstone and quartzite countertops.

“They used to live in the Heritage Hill area, which has a lot of fantastic older homes,” adds Deidre Remtema, Deidre Interiors, in reference to the historic neighborhood near downtown Grand Rapids. “For their new home, they wanted to incorporate things that felt old and familiar to them with a mix of styles that looked ‘collected,’ rather than cookie cutter and brand new out of the box.”

As such, the design team created an eclectic mix of elements that, while diverse in details, work cohesively together. For example, rather than settle on just one, or maybe two, different cabinetry styles and colors for their Grabill Cabinets cabinetry, the homeowners chose to blend three door styles with a combination of stained and painted wood. The perimeter features lighter rift cut white oak cabinetry with a relatively simple Milano door style. In contrast, the refrigerator panels – which conceal the 48″ Sub-Zero side-by-side appliance – and built-in wine storage cubbies are constructed from darker walnut with the Hampshire door style. For the uppermost cabinets, antique mirrored inserts with brass trim bring in yet another design element that complements rather than matches.

Walnut is repeated for the foundation of the island extension, which is combined with painted maple in a custom hue color matched to Sherwin-Williams’ Ablaze for the Avondale doors featured on the main portion of the island. It offers seating for four as well as plenty of storage.

“It is always our mission to make sure that our kitchens aren’t only beautiful aesthetically, but are functional as well,” says Wiley, with regard to the importance of adequate storage. “Early on in the design process for this kitchen we mapped out how the family works in the space and we recorded every item that needed to be stored. This allowed each appliance to have a home so they could keep the space clean and beautiful every day.”

The island was also designed with a furniture-style vibe that is accented with gold-toned hardware that complements the unlacquered brass Waterstone pulldown faucet. Dropping the height of the extension furthers the look and creates a more appealing visual that differentiates it from the main section.

“We wanted it to feel like a ‘found’ piece of furniture,” stresses Wiley.

“She loves to cook and she’s a big baker,” says Remtema. “This is a kitchen that gets used by a family that loves food!”

The wood top also reflects the homeowners’ desire for a nature-inspired design theme that brings the outdoors inside.

“The wife is a landscape architect, and her love of nature drove the selections,” states Wiley, noting additional design decisions influenced by Mother Nature include the floral upholstered two-person bench seats, the reclaimed beams and the natural stone countertops, represented by Da Vinci White quartzite for the perimeter and soapstone for the island.

“Our clients had soapstone in their past kitchens and they loved its natural look,” says Remtema, adding that the stone is also used to clad the nearby fireplace and, thereby, ties the spaces together. “They also don’t mind that it will wear over time and it won’t always look perfect. They appreciate the patina and consider it added character for their home.”

Choosing quartzite for the perimeter countertops serves as a contrast to the soapstone on the island.

“Our clients wanted a lighter-colored material for the perimeter,” says Remtema. “And while she was open to the patinas of natural stone, she didn’t necessarily want marble. This quartzite offers more stain resistance, yet gives her the white, gray and taupe colors she was looking for.”

A place for plants

Additional kitchen perimeter design elements include a large sink window that provides visual access to the kitchen garden beyond. It was intentionally sized and placed so the homeowners could tend a few pots of herbs that are easily accessible. Custom floating shelves flank each side.

“She wanted space for her cookbooks…and a place for plants,” says Remtema. “We included a second set of shelves, located right above the [Miele] dishwasher, for their everyday dishes. Some people are hesitant about open shelves because of dust, but the family uses these dishes every day so that really isn’t a problem for them.”

Moving around the room, the design team also included an expansive cooking station that includes a Wolf convection steam oven and speed microwave and a Thermador coffee system. The Aga 48″ induction range is highlighted by a reclaimed beam and set against a backsplash comprised of hand-painted terracotta Rue des Rosiers tile from Tabarka Studio. Its delicate floral-esque design includes touches of paprika that ties it back to the island.

“She had loved the tile for a long time and she knew she wanted it included,” adds Remtema. “It was one thing she brought to the table right away.” ▪