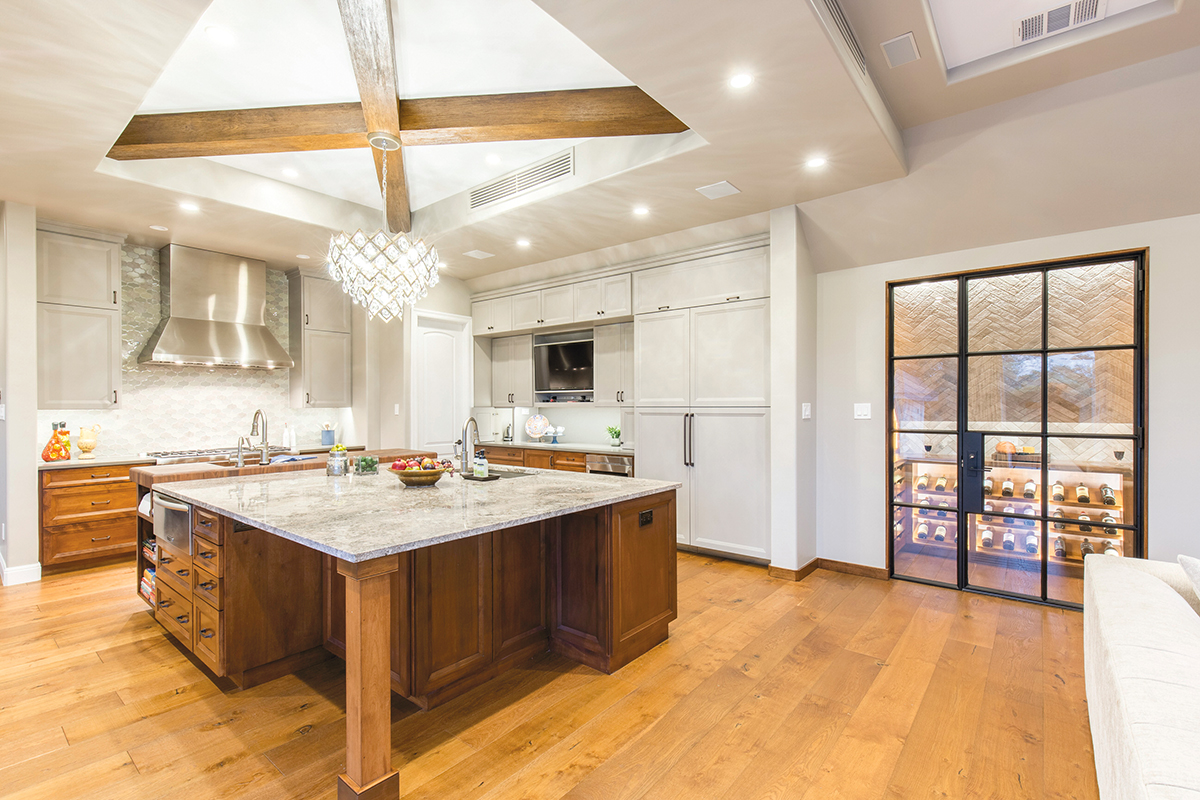 Christy Bowen, owner of Twelve Stones Designs in Austin, TX, benefited from a mentor-mentee relationship with Patrick Lavery when she first moved to Austin. Bowen’s firm has since found success with projects such as this award-winning kitchen, in conjunction with contractor Realty Restoration, LLC, which boasts dramatic beams and an extra-large island. Photos: Christopher Davison

In the design and remodeling industries – in fact, it may be said, in most industries – very few professionals are truly self-made. Even those who may not have had the benefit of a formal education very likely had at least one mentor to show them some of the ropes, or at some point received some solid advice. Truly, it takes a village to raise a successful kitchen and bath designer.

Mentorships in the kitchen and bath industry may take the form of an internship required for college credit, or an informal arrangement between a more experienced designer and a comparative newbie, or even a carefully cultivated online community. And, according to designers interviewed by KBDN, mentoring other designers isn’t simply an altruistic gesture – the mentor sees benefits as much as the mentee in the form of an overall elevation of the industry. 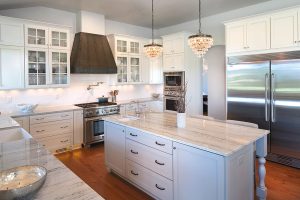 For Neiges, this meant accumulating information and experience on her own, through trade magazines, workshops and other means. A decade later, as an established business owner, Neiges resolved to become more involved with her local NKBA chapter and share her knowledge wherever possible.

“I started doing some presentations [at NKBA-accredited higher education programs]…and I started getting calls from some of the colleges saying, ‘Our students need 90 hours of intern work.’ And I’m like, ‘I’m open! Send them my way.’”

One such intern was Heather Hill, who was attending the local community college at the time in an effort to kick off an encore career as a designer. “I had actually seen Jan at the [Denver chapter] NKBA gala, where she was an emcee,” notes Hill. “I thought she was funny and very sharp, and I just thought that would be my dream internship to work with her. Especially being older, I wanted to be able to start my own business right away.”

For Neiges, freely providing the information she had to learn the hard way was a top priority. Hill credits this open dialogue with enabling her to hit the ground running in the industry. “[Jan] was the person to team up with because she’s so generous with information,” she says, adding, “Sometimes, especially in the design world, things can get a little competitive, and she has never given that vibe and has been nothing but supportive of everyone and what they’re doing.”

In addition to information, one of a designer’s most valuable assets is their connections within the industry, and Neiges is determined to share this resource with her interns. “[If I have a] contractor, a tile guy or a good showroom to take clients to…why should it be so unique to me? If I can introduce new designers, for example, to a showroom I always go to, [the showroom will] appreciate that because I’m giving them more business, and down the road [the showroom] might help me out if I’m in a bind.”

The benefits of this relationship for the mentee are evident – Hill, now an AKBD and an NKBA member, has launched her business, Heather Hill Interiors, and has already begun building her client base. According to Neiges, the mentor also sees a value return, particularly where technology is concerned. In addition to working extensively with CAD, Neiges’ interns have shown her many new and innovative ways of using social media.

Christy Bowen, CKBD, UDCP currently has over two decades of industry experience and has found success as the owner of the award-winning Austin, TX design firm Twelve Stones Designs. But, like all designers, there was a time when she was new in town and newly returned to the business after an extended maternity leave, trying to compile a Rolodex of reliable vendors and other resources. It was during this time that she first met Patrick Lavery, who was then working with Kiva Kitchen and Bath. 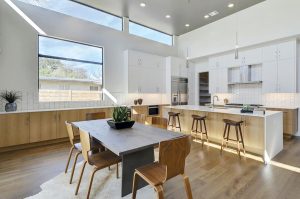 Both Bowen, designer of this contemporary spec home kitchen with builder Moazami Homes, and her mentor Lavery believe that mentoring others elevates the entire industry.

Lavery, a designer and currently a co-owner of Troo Designs, in turn, had plenty of help as he was starting in the industry. “I had designers who helped me out when I was younger, people who tried to teach me the right things and lessons about roles in the design world that were just important, straightforward, logical rules,” he recalls. “And I really appreciated people taking time with me, so I’ve always felt it was important to pay it forward to those who were interested.”

In his capacity as a mentor, Lavery has advised many designers, including Bowen, on the everyday practicalities of running a design business, sharing his knowledge regarding everything from developing professional relationships to pricing projects. “[I work] to help designers make sure they’re paying themselves a living wage and [advise them on] how to build up,” Lavery says, noting that the designers that he helps are “at that in-between point where you’re starting off, and you have to build a clientele and a following to where you have enough consistent work that you start to make a real living. [I want to help them] to take it from the hobby stage to being a full-on interior designer that makes enough that they can make their own way, so to speak.”

For Lavery, his efforts to mentor other designers are not only about a personal obligation to ‘pay it forward,’ but are the key to keeping the industry viable. “It’s important that we work together and help each other because I frankly think that our trade world is…going through a real transition and it’s important that we elevate the people in our industry, not just for designers, but all the tradespeople and professionals,” he believes.

Bowen, who has since gone on to mentor other designers and industry pros as well, is of a similar mindset. “Mentorships really help set the bar for the industry,” she says. “For example, if you have competition, just making sure that the competition is competing in the same bracket as you [is valuable].”

She points to her work with the National Association of the Remodeling Industry as a good example of these efforts paying off. “We’ll sit down with young people coming into the industry and say, ‘look, we’re trying to create the standard in the industry so that we can set a precedent for homeowners so they know what they’re getting…If you charge what you’re worth, then we’re all on a level playing field and you’ll get paid more…’ Mentoring makes sure that your competition is on the same page as far as not undercutting you in service or product or performance.”

Mentorship for a new era

In this digital age, new forms of mentorship have begun to develop, aided by social media. One designer embracing technology to share her knowledge and insight with others is Cheryl Kees Clendenon, DGD, whose Facebook group, Small Business Think Big, currently has well over 750 members.

Small Business Think Big, which is aimed at those in the design industry and has been in operation since October 2018, is “about sharing best practices in an honest effort to help each other rise to the top and achieve goals with no nonsense discussions of business in general, retail operations and how this ties into the business of design, buying, selling, promotion and the nitty-gritty of day-to-day issues.” The group is extremely active, with members posting questions and answers daily and starting lengthy discussions about topics from useful apps to pricing advice, all led and monitored by Clendenon.

“I think [the group] began because I have a lot to say,” says Clendenon, who is the owner and lead designer of In Detail Interiors. “I found myself commenting in other groups and saw that many designers had more focused business questions that I was in a great position to answer and people were messaging me all day long – so why not do my own group?”

The group is, by design, tight-knit and carefully moderated. “Our group is a little different than others – it is more ‘led’ by me than just people having a forum to ask questions,” Clendenon explains. “I made an intentional decision to make this a very tight group focused primarily on business issues and marketing, etc. – and a little fun, too. That focus keeps it to fairly serious designers – not quite as many new folks, but more designers looking to level up, have a second opinion for questions from me and other senior designers in the group, or second-career people who have led fab careers but want to change or need help in that change, people who are busy but want to know more about hiring and growth and, of course, many who want to know more about sales and selling products.”

The community has developed its own style of lateral mentorship in which industry pros look inward to elevate one another while simultaneously broadening their own horizons.  “I wish I had this 20 years ago,” Clendenon concludes. ▪